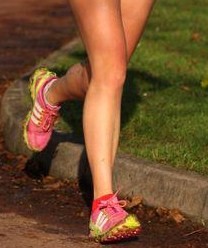 The NHS Choices ‘Couch to 5K’ Programme, is a nine week scheme, consisting of three runs per week, which trains novice runners to run continuously for thirty minutes[1].  NHS Choices has promoted the scheme since 2010. The accompanying free podcast series, is currently the 8th most popular UK podcast on iTunes[2].

In January, I set up a group version of the ‘Couch to 5K Programme’ for staff at the hospital where I work. Response rates were good, with twenty-five staff members signing up for the programme. Each week, I supervised one group session at a local running track, and participants individually completed the other two sessions during the remainder of the week. Around twelve runners completed the scheme, with a few participants choosing to complete the programme alone due to work commitments.

In an attempt to quantify potential benefits, I also carried out physical and questionnaire based assessments on willing volunteers at the beginning, middle and end of the nine week scheme.

Eight beginner runners (all female, aged 24-56) took part in the assessment scheme.  The most popular reason for participating in the programme was weight loss (75%). Other reasons included improving fitness (50%), and perceived improvements in physical energy (37.5%), as well as stress management and improved sleep quality.

Volunteers took part in a 20m bleep test before and after the programme – 50% improved their performance on the bleep test at the end of the nine weeks. On the questionnaire based assessments, at least half of the participants reported subjective improvements in their sleep quality, general health status and energy levels.  At the end of the programme, a small group of runners also took part in a local free 5K run (Parkrun).

Many found the scheme extremely beneficial and all participants said they would recommend the scheme to others:  ‘I would say to anyone who thinks that they can’t (do the scheme) – just go for it, I never thought in a million years that I would be able to run for 30 mins and enjoy it! ‘

The ‘Couch to 5K’ scheme is a valuable inexpensive tool to help increase physical activity, aid with weight loss and improve quality of life. Participants can complete the scheme alone using the podcasts and session plans, or via local versions of the scheme, set up by leisure centres, community groups, schools, workplaces etc. The programme can also be linked to local 5K events such as the ‘Parkrun’ series, which can help participants stay motivated and maintain their running after the programme. On completion of the 5K programme, 10K and half marathon versions may also be set up for those wishing to further increase their running distance.

Dr Sophie Bates (MBBS MA) is a graduate of Cambridge University and University College London. She is a Foundation Doctor in London, and is planning on specialising in Sports and Exercise Medicine.  She competes in distance running and triathlon, and is currently working on several small SEM-related projects.