It’s no secret we are exercise advocates. And we love media coverage that provides the general public with even more incentive to be active. One profiled study on social media and language links sports with greater emotional stability. Even more notable, are the numerous international news outlets (including articles from Australia, India, the US, and the UK) covering the work of Dr. Booth and colleagues. Dr. Booth et al.’s research suggests that moderate-vigorous intensity physical activity predicts higher academic achievements in adolescence, or in the words of Australian reporters: “exercise is brainfood for teens.” 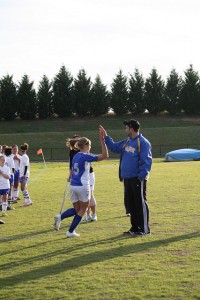 Booth’s research team base their findings on a representative sample of almost 5000 children who were all part of the Children of the 90s study, also known as the Avon Longitudinal Study of Parents and Children (ALSPAC). This is tracking the long term health of around 14,000 children born in the UK between 1991 and 1992 in the South West of England. They conclude: “If moderate to vigorous physical activity does influence academic attainment this has implications for public health and education policy by providing schools and parents with a potentially important stake in meaningful and sustained increases in physical activity.”