This interview was published in the Aspetar Sports Medicine Journal and is reproduced with the kind permission of Aspetar – Qatar Orthopaedic and Sports Medicine Hospital.

Just email journal@aspetar.com with the address you want the excellent Aspetar Sports Medicine Journal sent to and you’ll join 1000+ on the subscriber list. No junk mail, no selling your details – just this excellent high-quality content journal that has emerged from Qatar (now in Volume 2). 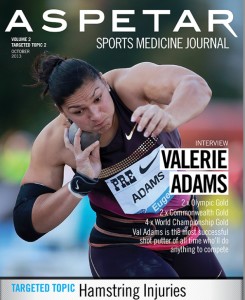 Her career speaks for itself: two Olympic Games gold medals, two Commonwealth Games gold medals, two World Indoor Championship gold medals and four World Championship gold medals. In 7 years, there has been only one time when New Zealand shot putter Valerie Adams didn’t take home gold, and even then it was a silver. In the world of track and field, she was the first woman to win four back-to-back individual world championships. When it comes to shot put, she is the most successful shot putter (man or woman) of all time.

How did she get there? A combination of discipline, pain and very little downtime. Here the 29-year-old tells Nick Cowan about her love of competition and great support team.

Tell us about some of your career highlights.

Highlights for me have been the 2008 Beijing Olympic Games where I won a gold medal, the 2001 World Youth Championships which was my first big win, 2011 World Championships in Daegu where I equalled the championship record with a personal best throw of 21.24 m and the London Olympics last year – eventually!

What is your current training programme?

My training programme consists of two sessions a day. I do a lot of weight lifting, throwing, plyometrics, medicine ball work, a lot of specific training for throwing the shot and recovery and rehab on top of that.

My coach, Jean-Pierre, designed an eccentric-concentric machine that we use for base training in Switzerland. There are no machines like this in New Zealand and so we travel to Switzerland to start new phases. This type of training enables me to get maximal strength and get a real base under me, in contrast to normal training in the gym.

With the athletic schedule the way it is, do you ever get any downtime?

I get about 4 weeks off in October when the season’s done, that’s it.

My holiday period is basically just the month of October and, thankfully, it’s a good month for me. I get to party because it’s my birthday and I try and be a ‘normal’ citizen for that month.

You spend most of the year living outside of New Zealand. What’s it like to live away from your home?

It’s just part of life and it’s something that I’ve chosen to do. My career as an athlete won’t last for the rest of my life so I’m giving it my best shot while I can. It’s good to be away from New Zealand because there are no distractions, meaning there’s more time to train and recover.

And Europe this is where the competitions are, so it makes more sense to be based here instead of New Zealand.

What would you say is the toughest part about the sport of shot put throwing?

Every aspect of it is challenging.

Have you ever had an injury that threatened your career?

In 2006 I had shoulder surgery. I had two cm cut from my clavicle because of overuse. It didn’t stop my career as such, fortunately, because it happened in the off season and I was able to get without it interfering in any competitions.

I’ve been quite lucky in that I haven’t had to skip a season through injury so far. That’s down to having a great physio and also the support team who have been able to manage me.

Then again, I’m not the kind of athlete to stop for anything. My pain threshold is very high, I’m an animal like that and I love to compete very much. I’ll do anything to compete, pain or no pain. But pain is just part of an athlete’s life.

How do you treat an acute injury?

Basically I call my physio, Louise Johnson. She’s been working with me since day one; we’ve worked together for 14 years. She assesses the situation from near or far and we try and get the help we need immediately. It can be hard if I’m overseas but she runs the show and gets help to me as soon as possible.

I am pretty good at self-managing but she calls the shots on doctors and scans and I just have to listen to her.

Who makes up your medical support team?

I work on a day-to-day basis with my physio, Lou. She’s my right-hand man, the person who is on my phone’s speed dial. It’s very important to have a good relationship with someone like that.

I don’t travel with a doctor. Because my physio knows me so well, she knows what I need and what to do when things come up. But I do have a doctor, chiropractor and massage therapist and as far as ay medical conditions are concerned, those are the people that look after me.

Who makes the decisions around your health?

It’s a team approach but I basically have the last choice. The doctor’s opinion will usually have the biggest impact but then again I have both a sports doctor and a general practitioner who I see.

My coach is awesome! He’s saved my career and made me a better athlete than ever. With his training and planning I’ve been able to save my back from injury. It’s very important that he is kept in the loop on everything. If you’re a team, there’s nobody kept in the dark.

He’s a very hands-on coach. He likes to know what’s going on and will adapt things accordingly – which is very important – as opposed to shutting down on you. I’ve been lucky to work with my coach, Jean-Pierre.

No, not at the moment.

I don’t follow any nutritional programme but do have supplements to take. I work with High Performance Sport New Zealand who help me figure out what to take pre- and post-competition. As far as eating is concerned I look after myself.

Do you find much difference in the medical treatment you receive when you travel, compared to back home in New Zealand?

This is only my personal experience, but I have found that European physios are not as hands on. In Europe they tend to give you a lot of stretching and exercise and ask you to come back in a few days. I prefer to feel like I’m getting more benefit from hands on work.

What do you think the athletic world can learn from New Zealand?

I think it goes both ways. In New Zealand, we have to fight all our own battles because we’re stuck at the bottom of the world – we have to research what the rest of the world is doing. We do well for a small country but I think we have our own strategies which work for us. Of course, there are things in Europe that we could benefit from. For example, their technology tends to be slightly better.