My affiliation with the British University and College Sports (BUCS) medical system was initiated as a physiotherapy student, wanting future full time work in sports. Also, thanks to an inspirational lecturer and a meeting at the bi-ennial ACPSEM conference (The 2013 conference is next month). 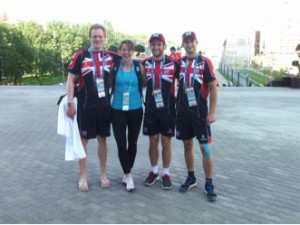 AS part of the domestic BUCS programme, I gained invaluable experience in physio provision at multi-sport competitions as well as exposure to a variety of athletes. I also gained real confidence in working alongside much more experienced medical staff which has benefited me during subsequent placements and my work in the NHS. I also made friends and contacts who to this day provide me with fantastic opportunities and open doors.

The BUCS organisation oversees all University sports in the UK and Internationally and via the designated lead Doctor and Physio. Staff are appointed throughout the university year to cover a number of events nationwide. The majority of the physiotherapists are Association of Chartered Physiotherapists in Sports and Exercise Medicine members working their way through the CPD pathway,  while the doctors are very often Sports and Exercise Registrars or enrolled on the programme.  This “brain trust” is then charged with supervising and teaching a number of volunteer shadowing physiotherapists and students.

Almost 3 weeks after my final University exam, I flew to Belgrade, as one of the two student physiotherapists within Team GBR HQ, for what would prove to be a fantastic life and learning experience. This fed a now ongoing hunger to be part of as many major international sporting events as possible. As a student, I was able to float between all of the GBR team sports and learn from all the physios in attendance, as well as having my own HQ responsibilities.

In the years since, I have continued to be actively involved in the BUCS domestic programme, first as a shadowing physio while I worked my way through the ACPSEM Bronze award pathway, which I was eventually awarded in October 2012.

This June, I jumped at the opportunity to attend WUGS in Kazan, Russia as a fully fledged member of the physiotherapy team.

Judo, Shooting and Male Rugby 7’s all in 30 degree heat, a veritable smorgasbord of aggression, athleticism and weapons was what was on offer this time.  My own NGB work at home revolves around volleyball, a sport with very little if any contact and certainly no weapons. So exposure to sports with an inherent risk of sports trauma proved at times intimidating, but made for a fantastic experience. Pre-event we had discussed athletes’ needs and as well as any regulations pertaining to medical support in competition.

Judo training included sparing – my first real insight into the technicalities of the sport. Judo is an incredibly explosive sport placing huge demands on the whole body, and while athletes are incredibly adept at protecting themselves when thrown, it obviously puts them at risk of serious cervical injury. Alongside the Chief of Medicine we carried out a thorough check of the on-site medical facilities as well as the evacuation procedures, heavily relying on our invaluable interpreter.Physio input during competition was tapered and planned in response to time between bouts, athlete requests and their previously discussed needs. A number of pre, inter and post event soft issue techniques, some of which I had learned on the ACPSEM Sports Massage course, were applied to all of the athletes as well as the odd thoracic and lumbar manipulation. The judo proved to be one of the most fulfilling physio experiences I have ever had. The small number of athletes really gave me a chance to get to know them well personally and professionally.

Shooting was a far less intensive affair from a physio standpoint, but I held a number of the guns. Of the disciplines I observed, the shooters are required to hold sustained postures, some in lying, some in kneeling, some in standing and in one event all three, one after another. This places quite a large degree of strain on arms, shoulders, necks and lower backs.  Any treatment was applied mostly back at HQ with gentle soft tissue techniques applied to the aforementioned areas after training sessions.

Another physio and a doctor provided the on pitch medical care for Rugby. However, my time spent treating and taping athletes before, during and after training/games really gave my clinical skills a work out in what was at times a cramped and high pressure situation. The experience was made all the better by having a really good close working relationship with the other physio and the Dr, where communication and factor 30 sun cream were imperative (Karen the Dr is ginger and I’m see through Scottish white). The Rugby 7’s medal triumph was a great way to round off my second WUGS experience.

I suppose I exemplify the benefits of getting involved with ACPSEM as a student and then following the career and CPD pathway laid out by said organisation. However, I think many people involved in sport already know that great experiences come from huge amount of hours volunteering, travelling the country and making yourself available. I am a very different clinician from the student who went to Belgrade in 2009, and I am definitely no master, but ACPSEM and BUCS made the road to my current position and a second major international sports event much easier.

Kenny Watt works at SPACE Clinics in Edinburgh, Scotland, and works with BUCS and Scottish Volleyball. He is a member of the Association of Chartered Physiotherapists in Sports & Exercise Medicine  on whose behalf he has submitted this blog.