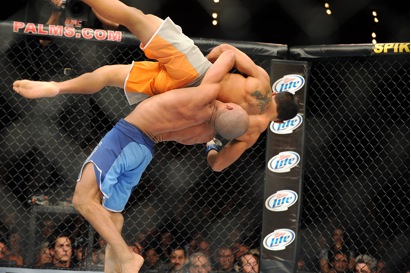 Since the first Ultimate Fighting Championships in the early 1990s, Mixed Martial Arts (MMA) has gained popularity with regular national and international tournaments [1]. For some it remains barbaric, taking us back to our primal instincts of fight vs. flight. This has led to calls from medical groups for the sport to be banned [2].

As the name implies MMA involves a variety of disciplines, ranging from wrestling to jujitsu.  Fighters employ whichever form they feel comfortable with in three round contests with weight and skill matched opponents. Victory is achieved by submission, achieving a score from the judges or if one’s opponent is disqualified due to an illegal maneuver or if deemed unfit to continue.  The latter can often involve fight-medics when judging fitness to compete or treating those who may be unconscious.

To the skeptics, fighters may be perceived as brawlers who have accepted MMA rather than choosing other sports.  In reality, the overwhelming majority are well-conditioned, all-round athletes who endure intense training with aerobic, resistance, flexibility and skill-based programs.  Without this conditioning, fighters would not be able to keep pace with high intensity rounds nor withstand the repeated impact from opponents.  Equally, the technical elements play a significant role; with many fighters analyzing a fight long after it has ended.  Thus, although they do not compete in a conventional setting, MMA fighters are far removed from ‘just brawlers’ as many consider them.

When providing medical care as the “fight-medic”, responsibilities involve pre-fight medicals, being present at the ringside for clinical decisions and post-fight medicals or treatments.  Common injuries include contusions and lacerations, but one may be faced with more serious problems such as the unconscious athlete or dealing with acute exhaustion [3].  One case report describes a vertebral artery dissection in a fighter and interestingly, it appears that professional fighters may encounter more injuries than their amateur counterparts [4, 5].

Presently, guidance exists regarding suspension from competition following knockouts or other significant injuries [6].  However, for MMA to progress, medical professionals must review injury patterns and seek methods by which these can be limited.  Although seemingly contrary to the essence of full-contact sport, fighters are athletes and deserve the same consideration from medical professionals as those in other sports.  Equally, with increasing number of female fighters, it is important that we are aware of how injury patterns may differ and thus further work is needed to support these athletes in their chosen sport.

Dr Dinesh Sirisena is a Sports and Exercise Medicine Registrar in London.  He is the Team Doctor to AFC Wimbledon and the FA Partially-Sighted Development Squad.