Physiotherapist at Sporting Balance who works with a Formula 1 team. 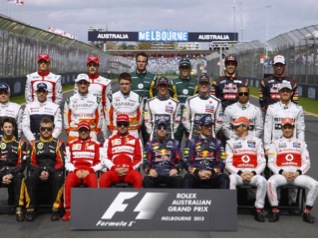 The 2013 Formula 1 (F1) season exploded into action with a thrilling and tactical Australian Grand Prix on St. Patrick’s Day with a calculated win by Kimi Raikkonen. A sport heavily reliant on precision engineering and technological marginal gains, the car was traditionally viewed as the most important predictor of success or failure.

Although the legendary Ayrton Senna was renowned for his punishing fitness regime, there was a public misconception that F1 was merely an expensive pursuit, done sitting down and that apart from good reflexes and driving skills, no further driver conditioning was required. This mind-set has changed dramatically in recent years, coupled with an increase in recognition of the importance of a multi-disciplinary medical team underpinning each driver’s performance.

As a key element of the multi-disciplinary medical team, the role of therapy to augment driver performance and wellbeing has also grown. Today, a driver’s backroom medical team will consist of sports physicians, sports scientists, physiotherapists, strength and conditioning coaches, personal trainers, psychologists, nutritionists and masseurs. My exposure to the world of F1 and motor-racing over the past year gave me a fascinating insight into the driver’s existence.

Given the extreme speeds of acceleration, braking and cornering involved in F1, a driver’s body is subjected to tortuous levels of gravitational-force  (g-force) which has been measured from 1g to 6g. These g-forces are longitudinal (accelerating/braking), lateral (cornering/turning) and a third type of force being vertical forces. Until recently these forces were not known to significantly affect a driver. The vertical forces are what you would experience in a lift rapidly moving up/down, and the human body is not well adapted to tolerating forces that are parallel to the spine (as it can cause significant blood pressure gradients along the vasculature to the brain). In addition, the rate at which g-force is increased/decreased, the length of time at a particular g-force and whether there are sudden changes in lateral g-forces (eg: speeding through a tight left to right chicane can elicit left-to-right whiplash type cervical torque as the driver is violently jolted when cornering) will effect various physiological reactions. If you consider that a human head is approximately 7% of bodyweight and a helmet weighs 1.2kgs, so with a driver weighing 67kg, a 4g force would equate to 230 Newton acting on the neck! 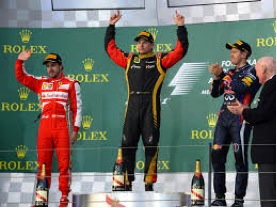 The conditioning and safety of a driver’s neck is as important as head/neck safety in rugby. It is important to ensure that a young driver progressing through the various ranks has developed sufficient head/neck control to begin high load neck training to prepare for F1 racing. Although the life-long exposure to progressively increasing speeds and g-force and even wearing the helmet itself will allow for gradual tissue/motor adaptation, the jump to F1 level racing and even from the karting ranks to ‘single-seater’ cars can be significant.

From a performance perspective, having the ability to control the head and neck position while driving at speed is paramount for maintenance of stereo-acuity (depth perception) which is directly proportional to the inter-pupillary distance (IPD). Changes in head and neck position when cornering for example can result in tilting of the head which will decrease the horizontal distance between pupils and hence decreases the horizontal IPD. There is a near linear correlation between increasing head tilt and decreasing stereo-acuity, and weaker stereo-acuity and stereo-vision has been shown to lead to earlier braking strategies. In a sport where milliseconds can be the difference between the top step of the podium and last place, or worse still crashing into a barrier or careering off the track by misjudging a corner, the benefits of excellent head/neck control and the consequences of poor control are significant. 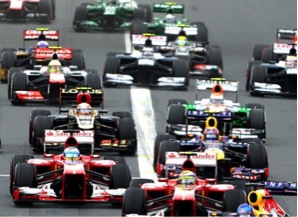 The physiotherapist and marginal gains

Physiotherapists are ideally placed within the motor-racing team to help develop young driver talent and perform regular musculoskeletal assessments with a particular emphasis on cervical screening. In conjunction with the strength and conditioning coach and personal trainers, the physiotherapists design graded cervical loading programmes that may involve wearing neck harnesses attached to pulleys/cables or theraband, all in an effort to gradually and safely expose a driver to g-forces and to maintain their conditioning during the off-season.

Sir David Brailsford, the mastermind behind British cycling’s worldwide success, speaks of the aggregation of marginal gains to improve performance. In F1, having a competitive car and engine is fundamental for success. However, the marginal gains accrued from having a chartered physiotherapist to complement the back-room medical/fitness team may be the difference between securing a world title or the title of an ‘also ran’.