Background/Aim – Beneficial health effects of regular physical activity and exercise are well established. However, a variety of exercise types and modes complicates quantification of physical activity. Introduction of a single parameter for the objective measurement of exercise amounts might facilitate exercise prescription in primary care practice.

Methods – A novel exercise device with a friction resistance mechanism was equipped with a temperature sensor to measure heat production during the exercise. Heart rates were monitored with a fingertip pulse oximeter. Four healthy volunteers participated in this study.

Results – Heat production in the device during an exercise bout was used as a measure of exercise amount. An individual amount of device usage was determined in the respective fitness test and prescribed according to the current recommendations for daily physical activity. Automatic daily recordings showed significant variations in exercise intensity and duration in unsupervised conditions, but the prescribed amount of exercise has been exceeded on most days and weeks, indicating a full adherence to the exercise prescription. Upon completion of a three-month exercise prescription daily exercise amount was adjusted according to a new fitness test.

Conclusion – This study demonstrated for the first time that amount of physical activity can be calculated as a single parameter of exercise device usage. The results suggest that a personal amount of exercise can be determined and prescribed, and that adherence can be objectively monitored on regular basis.

Medical research has demonstrated that regular physical activity has a significant preventive and therapeutic effect.1 Nevertheless, the implementation of exercise recommendations and guidelines is not effective, especially in general practice.2 It was shown that ‘considerable uncertainty remains as to the effectiveness of exercise referral schemes for increasing physical activity, fitness, or health indicators, or whether they are an efficient use of resources for sedentary people with or without a medical diagnosis’.3 It might be argued that in order to improve efficiency of exercise prescription it should be: (i) personalised and hence based on the assessment of patients’ fitness level,4 (ii) expressed in well-defined doses and (iii) followed by objective monitoring of compliance.

However, current methods for quantification of individual fitness levels and exercise amounts might be too complex for routine application. For example, the maximal oxygen consumption (VO2max) is considered a gold standard for assessing cardiorespiratory fitness, but respective VO2max protocols are not always feasible for many reasons, including limited time and staff, participant burden, possible medical oversight, costly equipment, and difficulty obtaining a maximal effort.5 Quantification of physical activity is also challenging because it takes many forms and varies in type, intensity, duration and frequency.6 It is a common practice to base the assessment of physical activity on self-reporting, which is prone to measurement error and can lead to incorrect inferences about physical activity behaviours.7 It was shown that healthy adults overestimated energy expenditure during exercise by 3-4 folds.8  Exercise-induced energy expenditure can be measured objectively, but it requires sophisticated equipment and complex technologies.9

Here, we report the development of a feasible approach for personalized exercise prescription, which might be suitable for wide implementation in primary care practice and for use in medical research.

A novel resistance exercise device MedExercise® ST (MDXD Pty Ltd, Australia) was used in this study (Figure 1A). Changes of temperature in the resistance unit were measured with a temperature sensor connected to the industrial multimeter IP57 (Digitech, Australia). Data was collected using respective software Multimeter V1.0 from Digitech and then converted into Excel databases (Microsoft, U.S.A.) for analysis. The average exercise-induced rise in temperature was calculated after subtraction of ambient temperature values. A fingertip pulse-oximeter CMS-50E (Contec, China) and corresponding SpO2 Review software were used for the continuous measurement of heart rates during the exercise. Overall, four healthy volunteers, aged between 36 and 49 years, participated in this study. Respective informed consents were obtained. Statistical analysis was performed using the Student’s t-test. 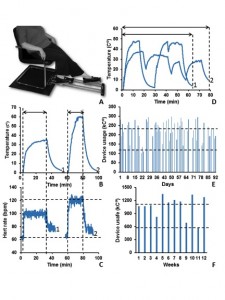 We hypothesised that the amount of exercise device usage achieved by the participant at particular intensity and duration would reflect participant’s level of fitness and could be used as the personalised amount of daily physical activity. MedExercise device was chosen for this study because it allowed continuous monitoring the intensity of usage through the measurement of exercise-induced rise of temperature in the friction resistance mechanism. During exercise the user repeatedly extended and flexed legs by moving foot platforms against graded resistance to their movement (Fig. 1A). Friction between the rails and foot platforms caused fast rise of temperature in the resistance mechanism, whereas stopping of exercise results in drop of temperature to pre-exercise level (Fig. 1B). Conversely, a total amount of device usage during the exercise bout correlated with the amount of heat produced in the resistance mechanism. The latter was reflected by an area under the curve and calculated by multiplication of an average exercise-induced rise in temperature and duration of recording in seconds.

Figures 1B represent a typical recording of temperature in the MedExercise device during moderate (trace 1) and vigorous (trace 2) exercise bouts, as monitored by respective heart rates (Fig. 1C), where a higher intensity of exercise caused temperature rise to the higher level (Fig. 1B). The respective amounts of device usage were calculated and expressed in kilo C⁰ (kC⁰). The amount of exercise at vigorous intensity was higher than during moderate physical activity: 139.5+16.4 kC⁰ and 113.8+7.9 kC⁰ (n=3, P<0.05), respectively. However, since the moderate intensity of exercise was better tolerated, the personal amount of 113.8 kC⁰ daily exercise was selected for the prescription. Therefore, according to the current physical activity guidelines,10 a personalised exercise prescription for this participant was: a minimum of 113.8 kC⁰ x 5 days per week = 569 kC⁰ weekly for three months of MedExercise device use.

In contrast to prescription of conventional drugs, which are given in the specific doses and regimes, physical activity takes many forms and varieties, making it difficult to standardise.6 We have hypothesised that the amount of exercise device usage could serve as an objective and practical measure of exercise amounts. MedExercise device allowed direct measurement of heat production during the exercise through detection of temperature rise in its friction resistance mechanism. Conversely, the amount of heat produced in the device corresponded to the amount of exercise that participant performed with the device. A total amount of heat production during an each exercise bout depended on the intensity and duration of device usage, and could be calculated as an average rise in temperature multiplied by the durations of exercise. Therefore, a single parameter of heat production incorporated all variability of device usage such as resistance, frequency, duration and presence of breaks.

The limitation of this study is a small number of healthy participants that necessitates further clinical studies. The strength of our approach includes the measurement of exercise amounts as a single parameter, simplified assessment of fitness levels, personalised exercise prescription and objective monitoring of adherence. It is important that exercise prescription sets only a minimum amount of exercise so that other types of physical activity should be encouraged for better health effects.

Dr Vadim Dedov has a stake in MDXD Pty Ltd, which designed and produced the equipment used in this study.