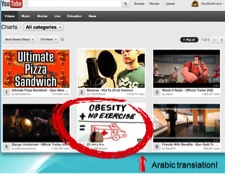 The World Health Organisation describes physical activity promotion to mass populations as one of its top 5 ‘Best Buys’. We collaborated to develop an Arabic version of the viral social media success 23 ½ hours to promote the importance of regular exercise to Arab countries. Particularly, those countries at high risk of inactivity associated with the non-communicable diseases epidemic of obesity, diabetes, cancer and heart disease. The Co-operation Council for Arab States (CCG) has identified that non communicable diseases (NCDs) cause more than 60% of all deaths in the region. In addition to video development, we conducted a ‘best buy’ research study to evaluate its effectiveness in reaching this audience. Our aims were to:

The results were amazing!

There are 1.6 million views of the Arabic version to date (viewing statistics represented 92% coverage of the Arab States). This video was the fifth most viewed YouTube video (covering ALL YouTube video releases) during the second week of the launch.

Other study highlights include:

Our results show that health professionals are able to successfully promote key health messages using social media. The translated 23.5 hrs communicated the benefit of simply walking for 30 minutes each day, to a large audience (in a short timeframe) in a region where greater physical activity promotion is of key importance.

This clearly demonstrates how social media may be used as a powerful tool for targeted messaging about regular exercise and physical activity interventions to communities at risk of NCDs.

A sum of take home messages are:

Dr Mike Evans Family physician at St. Michael’s Hospital and an Associate Professor of Family Medicine and Public Health at the University of Toronto and My Favourite Medicine