We wanted to share more news about the expansion of FIFA’s global initiative to improve health. Keep up the great work Prof Jiri Dvorak and team! 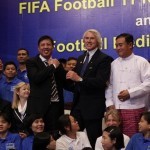 Myanmar haa been chosen to host the said programme because it is a “football country”, according to a FIFA insider.

“It’s not a coincidence that Myanmar is the first Asian country in which we have implemented the ‘FIFA 11 for Health’ programme,” said FIFA’s Chief Medical Officer, Prof Jiri Dvorak. “Myanmar is a football country, and as such we are trying to use the power of our sport to tackle some concrete health issues. Both the Myanmar Football Federation and the country’s authorities have shown a consistent interest in our medical and health initiatives as they are convinced about the positive effect of football can have on health education and prevention.”

Teachers and coaches from 18 pilot schools have gathered in Yangon (Myanmar’s former capital before it has been superseded by Naypyidaw in 2005) for training sessions supervised by Dvorak. An additional three-day course on emergency medicine and anti-doping for member association doctors was also conducted.

The ‘FIFA 11 for Health’ is an innovative programme that promotes 11 simple messages aimed at reducing communicable and non-communicable diseases. The initiative is based on an analysis of risk factors by the World Health Organisation(WHO).

After Botswana, Colombia, Ghana, Kenya, Malawi, Mauritius, Mexico, Namibia, Solomon Islands, South Africa, Tanzania, Tonga, Zambia and Zimbabwe, Myanmar has become the 15th country in which the ‘FIFA 11 for Health’ has been organised.

“Given the fact that HIV, malaria and tuberculosis, to mention just a few examples, represent fundamental threats to public health in Myanmar, we have a concrete chance to make a valuable contribution to the country by conveying some of the key messages of our ‘FIFA 11 for Health’ initiative, such as ‘protect yourself from HIV’, ‘respect girls and women’, ‘avoid drugs, tobacco and alcohol’, ‘wash your hands’, ’and ‘drink clean water,” added Dvorak.

According to recent figures released by UNAIDS, about 216,000 people live with HIV in Myanmar, with the overall population being 55 million. AIDS-related illnesses, tuberculosis and malaria are among the ten leading causes of death in the country.

With an estimated base of over a million active players, Myanmar used to be a football stronghold in South-East Asia in the 1960s and 1970s, although the country has performed less well in international football since then.

Over the past two decades, FIFA has been actively promoting the development of football in Myanmar through a variety of initiatives, including the Goal Programme, the Financial Assistance Programme (FAP) and the PERFORMANCE Programme.

FIFA President Joseph S. Blatter visited Mandalay and Yangon in March 2011 to open Myanmar’s Goal project II (Mandalay’s football academy) and to lay the foundation stone for Goal IV (upgrading the stadium at the national youth academy). A total of four Goal projects have been implemented to date in Myanmar, and the construction of a fifth – an academy building at the National Football Training Center – was recently approved (HCA)