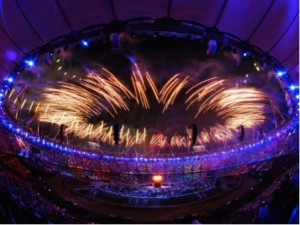 We have just witnessed the ‘Greatest Show on Earth’.  Over 10,000 athletes from 204 National Olympic Committees competed in 26 sports in a total of 39 disciplines at the London 2012 Olympic Games.  Whether you are a sport enthusiast or not, there was an attraction to the Olympics that one could simply not resist. If it wasn’t the exhilarating sport on offer, there was also the torch relay and the fascinating opening and closing ceremonies.

On a personal note the Olympics were an incredible high in my life. When I first thought about working in Sport and Exercise Medicine (SEM) I would never have dreamt of working at an Olympic Games, never mind at one staged in my home city. It was an amazing experience, witnessing great sporting achievements at first hand.

My role involved being a Field of Play Retrieval Team Member at the Olympic Stadium. I was fortunate to be sitting trackside, looking out for and assisting in the safe and timely retrieval of injured athletes.  Each shift involved working with different individuals from a variety of clinical backgrounds. The ability of teams to bond and work effectively and quickly together was outstanding.  There was also room for some continuing professional development (CPD) consisting of specialist lectures by well renowned experts on topics ranging from hamstring injuries and exercise associated collapse  to concussion and knee assessment .

From a sporting point of view, the Games had countless highs but for me there were a few defining highlights.

The Games did not pass without its problems. Sport is about fair play and competing on a level playing field. The Chinese, Indonesian and Korean players expelled from the Olympics for match-fixing surely showed the ugly side of sport.  One hopes that this will not be allowed to happen again. Performance enhancing drugs and sport are never far apart but with only three positive tests during this Olympics, it was one of the cleanest Games. This however does not tell the whole story. The World Anti-doping Agency reported that over 100 athletes were prevented from competing prior to the games because of doping offences. One must also question whether the limited number of positive tests indicates a reduction in athletes using performance enhancing drugs or whether they are simply getting better at hiding it. This is discussed at length in Dr Peter Brukner’s guest blog: Drugs and the London Olympics.

Comparisons have frequently been made between Olympians and Footballers with the criticism for the latter group. I would question why the racism accusations against Luis Suarez and John Terry have made front page news when there were also three Olympic athletes who were censured for racism, including Petras Lescinskas who was fined £2500 for making Nazi Salutes and Monkey noises when the Lithuanian basketball team played Nigeria, which has barely made the news at all. The International Olympic Committee is commended for making an example of these cases and helping the worldwide fight against racism in sport.

Legacy has been a key part of the London 2012 Olympics ever since the Games were awarded in 2005. Every individual has their own thoughts as to what the Olympic legacy really means.  I wanted it to inspire people to take up physical activity in an attempt to reduce the growing obesity epidemic. I was also hoping that it would be a catalyst for the development and sustainability of Sport and Exercise Medicine as a medical speciality.

Strategies have been put into place to encourage individuals to take up physical activity, which I believe will help, at least in the short term.  Time will tell whether this will continue in the long term.

What will happen to Sport and Exercise Medicine?

As a trainee in SEM I am worried about the lack of NHS consultant posts being developed and even more troubled by the lack of new trainees coming onto the training scheme. This topic is raised by Liam West in his BJSM podcast [link to come] .There is a lot of work being done behind the scenes and a £30 million capital grant to develop a National Centre for Sport and Exercise Medicine (NCSEM) is a step in the right direction. I am however left wondering whether the funding and drive for SEM will continue once the Olympics and Paralympics have passed.

The Olympics has been a truly memorable experience for all involved. I am fortunately not yet suffering from Post Olympic Depression Syndrome as I eagerly await working at the biggest Paralympic Games the world has seen starting on 29th August 2012.

For those who can’t make the Paralympics but need a sports medicine fix – remember that the BASEM conference is on November 22 and 23, 2012. Just 100 days to go!

Peter Brukner on Drugs and the London Olympics.