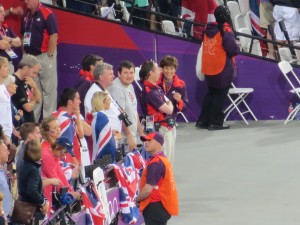 To work at an Olympic Games is a dream for every sport physician. So, in 2011, I applied to LOCOG as a volunteer. The minimum commitment was ten days, with an option to do both the Olympics and Paralympics. Nothing could hold me back at the interview. Yes, yes, yes, put me down for everything that is going. Needless to say, every day of sunshine is followed by a cloudy day or two. I did not realise that there were possibly going to be a few spots of rain along the way!

The fact that I live in the Netherlands is not LOCOG’s fault but I had to fly back and forth from Amsterdam to London for: my orientation training (a 2-hour rah-rah bonding session), the role-specific training (some general pre-hospital care training and role play), the venue-specific training (in my case, a guided tour of the Olympic Stadium with role play), my GMC interview and accreditation, and finally for LOCOG accreditation and uniform collection. None of these could be squeezed into one visit so I had already visited London five times (along with all the other medical volunteers) and the Olympics hadn’t even started yet. But hey, if the athletes can show commitment and determination, so can I! Armed with my stylish purple/pink uniform, I was ready for anything!

There was a slight problem with scheduling. Working 7 days in a row is much easier to fit into a busy work schedule than 7 spread over 17 days. One day on duty, followed by three days off, two days working. 1 day off etc meant that I now had to take six weeks unpaid holiday to cover both the Olympics and Paralympics. Not an insurmountable problem, but slightly unexpected, so a gentle request and a flurry of e-mails resulted in a rescheduling of the Paralympics duties (consecutive days to 9), and I was down to only five weeks away from paid employment.

For my first shift I was a bit nervous. It was on the 25th July before the Games had started – the day of the rehearsal for the Opening Ceremony. My shift started at 3pm but we had been told to arrive two hours early and to allow one hour for security. Security actually took three minutes and I never had a delay of longer than five minutes at any time during the Olympics – top marks to the military who were fast, friendly and forever courteous.

As a result, we all gathered in the dining area in good time and right at 1pm the LOCOG staff appeared and split us into two groups: first aid for the crowd and field of play recovery teams. I was in the field of play team (16), normally only responsible for athletes and officials, but today we would also be responsible for the 7,500 people participating in the opening ceremony.

We were taken to the venue medical area under the stadium. The 16 of us were split into 4 groups of 4. My group consisted of a sports physician (me), an anaesthetist, an A+E specialist and a paramedic. The arena field of play had 5 major entrance/exits, referred to as VOMs, one at each corner and an extra one under the Olympic flame. We were evenly divided over the 4 VOMs, and every group had to cover his/her quarter of the track.

Working as a team

For the first two hours, we did pre-hospital care training (role play) as a team, and practiced resuscitation and recovery scenarios. How would you handle: an official who was hit on the head by a discus, or three hurdlers who collided and ended up with one shrieking loudly, one lying silently, flat on his stomach, and one with his lower leg angled in a funny way? We were rapidly drilled into a smooth running team and got to know each other very well.

Why do you need to train a highly skilled group of professionals? All I can tell you is that it worked extremely well. The nervousness disappeared completely and we rapidly became a ‘front line’ unit that could cope with anything that the event had to throw at us. We were all from different backgrounds, and the training ensured that all our skills and competencies were fully utilised. Hence the make up of each ‘quadrimed’ – a sports physician (to evaluating sport injuries), a traumatologist or anaesthetist (to establish good airway access), and front-line emergency support (paramedic, A+E nurse, ambulance technician etc).

Action in the field!

Did we have anything to do? Certainly – but not a lot! During the 400m relay heats, as documented in every daily paper, the American athlete broke his fibula and continued his leg of the race, the South African tripped  and fell onto his shoulder, and a Jamaican third athlete had an upper leg injury – all in the same race series! Our teams were always located on the outside of the running track so the process was simple – check that it was safe to move onto the field of play, despatch a pair to review the injured athlete (one with a radio), assess the athlete, treat if necessary and rapidly remove to the medical facility (in our case by wheelchair). Easy enough you say, but with 80,000 people screaming at the top of the lungs while you are assessing an injured athlete, the adrenaline is in overdrive.

Every day we had a pre-shift briefing and a post (8-12 hour)-shift debriefing. The topic of one of these briefings was: make sure that you are noticeable, and it is noticed when you offer medical assistance to an injured athlete. Hang on, you say, aren’t you meant to be nearly invisible out there and do you job as inconspicuously as possible?

It turned out that one of the commentators doing an overseas broadcast had mentioned, live on TV, that an athlete had not received prompt medical attention. In fact, the hurdler had been offered a wheelchair immediately (within 20 seconds) but had refused assistance and hopped towards the finishing line. After the end of the race, he was helped off the track by two fellow athletes and medical personnel were finally able to take over.

In our briefing the next day, it was suggested that the visibility of the medical teams should be slightly raised – without going to the extreme of offering a wheelchair to every 10,000m runner when they finish and lie down on the track.

Another gem to come out of our training and briefing sessions included a review of collapse. A collapse before the finish line is abnormal and the athlete requires immediate attention. A collapse after the finish line is more common and is generally innocent – athlete bending over, hands on the hips or knees, athlete lying on the ground on their back with the knees bent, athlete kneeling on the ground with the head touching the ground. Abnormal postures that should sound alarm bells are – athletes lying flat on their back with their legs straight or lying flat face down on the stomach.

All equipment and supplies at the Games were standardised and provided by LOCOG. The medical professionals were not even required to bring their own stethoscopes. Every medical volunteer had a small green waistbag that contained gloves, paracetamol, sticky plasters, scissors etc, for the immediate care of small wounds and minor medical problems. The team leader of every quadrimed (group of four) carried injectable morphine and every group had two radios, a scoop stretcher, a basket stretcher, a gurney, a wheelchair, an AED and a big red medical bag with resuscitation equipment.

Most event doctors are used to carrying their own bag of equipment and supplies. So before every shift we each had to familiarise ourselves with the content the LOCOG provided in the Standard Red Bag. In addition, the 2 hour, pre-shift training and role play sessions enabled the teams to practice using the stretchers, gurney and AED.

One of the best weeks of my life!

I will never forget being on the track the evening that Mo Farah won the 10,000m and Usain Bolt, and the Jamaican Team, set the world record in the 100m relay. I have never heard such an incredible noise, or seen 80,000 spectators stand up and encourage one man home like they did that night!

Elite athlete care is just one part of the sports physicians role but it provides a great opportunity to help athletes who have spent many years training to achieve their goals. Their single minded focus, and continual commitment to improve, is inspirational not only for other sportspeople but for all of us who are aiming for excellence in our vocation.

Volunteering is a crucial part of the Olympic Movement and the LOCOG are to be congratulated on delivering the London 2012 Olympic Games superbly. I am now preparing for my role as the LOCOG venue doctor at Eton Manor, the home of wheelchair tennis during the Paralympic Games – bring it on!

Dr Babette Pluim is a Sports Physician with particular expertise in Tennis Medicine. She is Deputy Editor of BJSM. Follow her on twitter @DocPluim