*Please also see the commentary from @DrJohnOrchard on this blog here

* You  can vote on whether you think metal staples are a good idea via the BJSM ‘Current Issue’ page here: 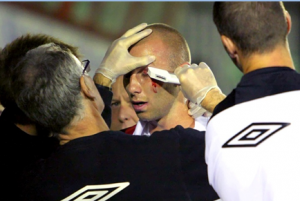 You are working pitchside and your player receives a facial laceration. What are your options for fast wound closure? Are metal staples an option?

Head and facial soft tissue injuries occur frequently during contact sports, especially those in which headgear is not routinely used.  Professional sport is continuous in its nature; hence a prompt return to competitive action is usually desired when rules require a bleeding player to leave the field.

Different methods of wound closure have been described and reviewed extensively in both the surgical and traumatic settings1,2.  Although skin staples are superior to sutures in the surgical head and neck setting1, their use has gained little popularity in the sports medicine setting of traumatic wounds to the head and neck.

In this BJSM Blog, we describe a case series of professional and semi-professional footballers sustaining lacerations to the face and scalp. Since 2004, all players returning to action were managed rapidly at the pitchside using metal skin staples, without complication.

Using a physician’s clinical database, we undertook a retrospective cohort study of patients treated for soft tissue lacerations sustained during competitive play between 1987 and 2012.  All injuries were treated by the same clinician.

Sixty-four patients had sustained 64 separate lacerations.  Fifty-seven (89.0%) of lacerations were sustained to the head and face (Table); most commonly to the scalp and supra-orbital tissues.

Prior to 2004, all patients were treated under local anaesthetic, using a combination of resorbable, synthetic, braided (Vicryl®, Ethicon Inc.) sutures and a non-resorbable, synthetic, monofilament (Ethilon®, Ethicon Inc.) sutures for wound closure.  Since 2004, 11 patients who were planning to return immediately to play had lacerations to the scalp, forehead and supra-orbital rim closed using metal skin staples (Weck Visistat® 35W disposable skin stapler, Teleflex Medical).   No local anaesthetic was infiltrated prior to skin closure for these patients.  Patients withdrawn from the match were managed using sutures as previously.

Soft tissue injuries occur frequently during athletic activities3, ranging from lacerations to superficial abrasions. Following any orofacial injury, initial structured assessment using the ABCDE approach of Advanced Trauma Life Support is required.  Once significant injury has been excluded or treated appropriately, prompt, thorough debridement and surgical repair of lacerations is required to restore function and anatomical form.  Players who sustain injuries that cause bleeding are required to leave the field of play immediately in most sports.  Players may return following definitive closure, when the risk of transmission of blood-borne infections decreases.

Surgical staples have been a common method of wound closure in the surgical setting since the 1990s, and are gaining popularity in the traumatic setting.  Do they have a role for pitchside closure of lacerations sustained during sport? Dr John Orchard (@DrJohnOrchard) reported a case of a patient sustaining an eyebrow laceration during an Australian rugby league game in 20044.  He closed the wound directly on the touchline using metal skin staples, a technique he reported having used previously. The case courted controversy due to the televised nature of the game.

An overwhelming advantage of skin staples is very speedy wound closure. That stapling is faster than suturing has been reported in 5  randomised controlled trials1.  Prompt return to competitive play in these circumstances is beneficial to both the individual and the team’s performances.  In the one previous reported case of skin staples used in closing wounds on the touchline, the player returned to play within 80 seconds of injury, and touching the ball within 40 seconds of having the final staple placed.  The reported case and the author’s direct observation of patients tolerating wound closure using staples in the absence of local anaesthetic further decreases the time away from competitive play.

RCT evidence indicates that skin staples have a lower wound infection rate than sutures1.  With regard to cosmetic outcome, studies have shown staples to be comparable to, and in some studies better than sutures at long term follow up.  Previous reports have described the removal of staples at the end of a game, followed by definitive wound closure under local anaesthetic with sutures.  We believe this is unnecessary, assuming the wound was cleaned appropriately and adequate wound edge approximation was achieved at initial closure.

Metal staples are more prominent from a wound than sutures and present a theoretical risk of causing damage to other players.  Wound coverage with a simple soft bandage eliminates this risk.   No players in the study have suffered further injury, or inflicted injury on another competitor, through having staples in situ and returning to competitive action.

Staples are not appropriate for lacerations on all sites of the head and neck.  They are contra-indicated on mucosal areas, and hence should not be used on intra-oral wounds.  Other sites which staples should not be used include the eye-lids, lips, ears and nose.

What about tissue glues?

Tissue adhesives are a effective and rapid method of closing traumatic wounds to the head and face2.  They are comparable with other methods of closure with regards to cosmesis, pain and procedure time, their disadvantage is a their greater rate of wound dehiscence.  Following repair of lacerations on the touchline with sutures or tissue adhesive, further collisions have caused wounds to re-open.  It is felt the extra strength of staples helps to prevent this4.

In summary, metal skin staples are a safe, effective and rapid method of achieving closure of traumatic wounds in the touchline environment.  This allows very prompt return to competitive play following blood injury.

No conflicts declared and specifically there was no support for the authors’ research or publication from the makers of Weck Visistat® 35W disposable skin stapler, Teleflex Medical.

BJSM encourages Guest Blogs and these can be submitted directly (ideally with artwork attached as a separate file) to karim.khan@ubc.ca