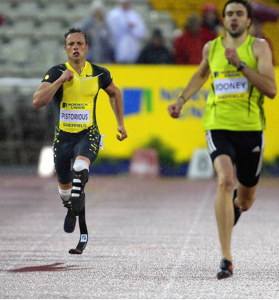 The use of prosthetic limbs in medicine has helped many patients over millennia lead a more comfortable life, enabling them to continue their activities of daily living as well as to compete in sport. In developing countries, prosthetic limbs are mainly used because of amputation due to trauma related injuries such as those suffered in conflict or road traffic injuries.[1] By contrast, in developed countries, the main cause of lower limb amputation is atherosclerosis, which may be affiliated with diabetes.[2] In the UK alone there are about 5000 new major amputations yearly, usually occurring in those who are sixty years old (or above),[1] making the use and development of prosthetics vital in the 21st century.

For athletes, this may be especially important as it could help them lead a normal life having being born with congenital limb problems. Other athletes who have suffered major trauma related injuries may want to continue competing in sports, and the development of prosthesis helps them achieve their goals. However, technological developments in sport can be controversial and this article aims to review any discrepancies as to whether or not technology creates an unfair advantage for the Paralympian, when competing against able-bodied Olympic athletes.

The history and development of prosthetics

Prosthetics have been used for over 3000 years, from the Egyptians where a prosthetic toe made of wood and leather has been discovered, to armoured knights who used prosthetic arms and legs in battle. In the sixteenth century Ambroise Paré invented prosthetics with joints, allowing prosthesis to become more functional.[3] And its not only humans who use prosthesis; elephants and horses that have been injured in accidents have also been given prostheses to help them move around!

Prosthetic limbs have evolved over time to use more advanced materials such as plastics and carbon-fibre composites. These materials make the prosthesis lighter, stronger and more realistic enabling the patient to engage in a full range of normal activities.[3]

Prostheses for athletes; the Flex-Foot

For athletes, possibly the most important development in prosthetic limbs has been the development of the energy-storing Flex-Foot, a carbon-fibre prosthesis with a heel component. Studies have shown the Flex-Foot provides amputees with a natural ankle motion and gives up to 84% of energy return rate to every step taken,[4] resulting in lower energy expenditure and an enhanced gait efficiency.[4] This value may seem high, but in comparison, the energy return rate of a natural limb is about three times higher at 241%.[4]

The above studies show that the Flex-Foot was the best type of prosthesis for athletes but the application of this technology has been controversial, as demonstrated by the much-heralded Oscar Pistorius or ‘Blade Runner’. The double amputee Paralympic runner who uses the “Cheetah” Flex-Foot (Figure. 2), a sprinting variant of the Flex-Foot without the heel, was eligible to qualify in the men’s 400 m sprint in both the 2008 Olympic and Paralympic Games. This begged the question; do Pistorius’ Cheetahs provide him with any advantage over biological limbs?  Or are they needed to maximise his performance and to overcome any compensatory consequences his disability creates? 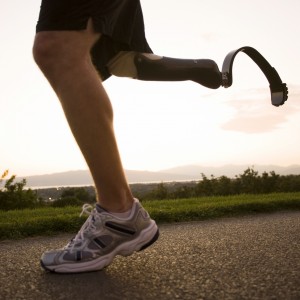 Pistorius was born with absent fibulas in both legs due to a congenital condition and at the age of 11 months he had a transtibial (below-knee) amputation to remove both legs. During his time at school, Pistorius competed in a number of different sports, including rugby, water polo, tennis and wrestling. At 17 he discovered athletics and he went on to win gold in the men’s 200m during the 2004 Paralympic games.

However in 2007, the International Association of Athletics Federation (IAAF) asked for an assessment to be carried out to find out whether the prostheses Pistorius used gave him any undue advantage. The study[6] found that at a given speed, the Cheetahs he used consumed 25% less energy than the runners he was compared to. This would mean Pistorius would have a much lower muscular demand, enabling him to run faster and for longer periods of time before he got tired.

The study also found Pistorius displayed a much lower vertical motion than able-bodied runners, meaning he lost less energy during the landing and take-off phase of running. This lead to the finding that the Cheetahs only lost 9.3% of energy during the stance phase of running compared to 41.4% in the biological leg. This meant that Pistorius had a much lower physiological and metabolic workload, giving him a large mechanical advantage over a biological leg. Pistorius argued the case stating the disadvantages he faced with his prostheses including running in the rain (giving him lower traction on the track), wind (which blew his prostheses sideways) and the fact that he needed more energy to start running than other competitors. However, the IAAF found him to breach rule 144.2 “any technical device … that provides a user with an advantage over another athlete not using such a device”,[6] subsequently barring him from competing in any IAAF events including the 2008 Olympic games.

He consequently appealed and in May 2008 just before the Olympics, the Court of Arbitration for Sport (CAS) overturned the IAAF’s ban stating that there was insufficient evidence that Pistorious’ prostheses provided him with any sort of metabolic advantage over able-bodied competitors. It also concluded that the IAAF did not consider Pistorius’ disadvantages through the race.  This allowed Pistorius to try and qualify for the Olympics, but however in the end he could not meet the required qualifying time.

However in November 2009, a new study[7] concluded that athletes with a Flex-Foot, similar to one Pistorius used had no advantage over able-bodied competitors. The running mechanics of a number of athletes was tested as they sprinted on a treadmill and the results showed that prosthetic limbs didn’t generate as much force against the ground as biological legs.

Only single amputees were tested so that their prosthetic and biological limbs could easily be compared. The treadmill that the athletes ran on measured the force, called ground reaction force (GRF), each limb generated as it struck the belt; the greater the force, the higher the speed. It was found that at all speeds, athletes produced a 9% lower GFR in their prosthetic limb than their biological limb. In an able-bodied competitor this would mean a 9% drop in their top speed. It was also found that there is no difference in swing times between the prosthetic and biological limbs, meaning that even though prostheses are lighter than biological legs, amputee sprinters don’t move their legs any faster than able-bodied sprinters. To back up this data, the men’s 100m Olympic and Paralympic finals were analysed and again no significant difference in the swing times of their legs was found.

Pistorius argues that thousands of other runners also use the same prosthetic legs as him, without getting anywhere near his times, and that his times have been steadily improving since 2004 since he first got his Cheetahs blades not because of advances in technology, but due to his relentless training and improved technique. His sporting motto is “You’re not disabled by the disabilities you have, you are able by the abilities you have”. This tells us Pistorius feels his impairment does not affect his physical functioning and that to him; competition is as much mind, as it is matter.

In 2011 Pistorius qualified for the world athletics champions in South Korea with a time that would have placed him in fifth place the 400-metre final at the Beijing Olympics. He is currently contesting for a place in the South African sprinting team that will compete in London 2012 Olympics.

Pistorius is not the first disabled athlete who attempted to compete in both the Olympic and Paralympic Games; several have done so before. Natalia Partyka, a table tennis player, was born without a right hand and forearm and competed in the 2008 Olympics and Paralympic games in Beijing and the wheelchair archer, Neroli Fairhall, the first ever paraplegic competitor, participated in the 1984 Olympic Games in Los Angeles and has also competed in several Paralympic Games.

When debating technological developments in sport, it is also important to consider equal access to the technology. For example, Abebe Bikila, an athlete from Ethiopia who ran barefoot, won the Olympic marathon in 1960. How much faster could he have run with the technology to absorb the ground reaction forces and improve friction? Similarly, who knows how much faster other amputees could run if they had access to Pistorius’ Cheetahs, of which access is limited due to their expense. This situation is more problematic for athletes in developing countries, where the funding for new technology is hard to obtain.

Another issue to consider is have the technological development of Pistorius’ Cheetahs lead to his steadily improving times, or it down to his sheer grit and determination as he so claims. If this is due to the former, one can argue: ‘Who’s going to win the gold medal, the athlete or the scientists who have developed and improved the prosthesis?’

Some have reasoned that historical continuity is crucial, so current athletes can be compared to past athletes and achievements can be understood in context. Allowing Pistorius to compete with his existing Cheetahs does not allow this, as he cannot be compared to past sprinters, which represents a break in historical tradition. Others have made the point that “Natural” athleticism should be exhibited, to preserve the essence of a sport. Using a prosthesis represents a much more significant change than using contact lenses or improving your diet.

Psychological issues must also be contemplated; amputees have often gone through stressful and life changing events, often at an early age, which may put a strain on their psychological well being. For example, they may have issues surrounding their body image, self-pity and frustration. Does the use of a prosthesis help amputees overcome any disadvantage that they have suffered psychologically?

The evolution of prosthetics has led to specialised limbs being developed for athletes, causing controversy to develop as amputees strive to compete against able-bodied athletes with their specialised limbs. Despite the debate, the ruling regarding Oscar Pistorius’ case was the right one. The prosthesis was primarily developed to attempt to restore loss of function in the Paralympian and there have been both studies for and against whether this prosthesis provides him with any advantage over able-bodied athletes. The fact that studies have not shown irrefutable evidence that Pistorius’ Cheetahs give him an advantage, allowing Pistorius to compete in able-bodied competition would constitute providing him fair opportunity to compete. Because of this uncertainty, Pistorius has rightly been given the sporting ‘benefit of the doubt’ and has been eligible to compete in the Olympic Games, given that he meets the required qualifying time. However, more research is required before any conclusive evidence is drawn as to whether prostheses do in fact give amputees an advantage or not. Until then, the question as to whether Pistorius is disabled, or too abled, remains.

The technological development of prosthesis has had a far-reaching impact worldwide, including in war stuck Sierra Leone where people regularly play amputee football. As prosthesis get more functional and advanced, it can be questioned as to whether or not using a prosthesis completely removes an amputees disability, as they now provide the opportunity for amputees to perform activities to the normal range (or even to a greater range), than a normal human being. This can be debated, but one thing is clear; prosthesis are bridging the gap between the disabled and able bodied.

Abhishek Chitnis is a 3rd Year Medical Student at Keele University. He has a keen interest in Sports and Exercise Medicine and hopes to pursue it as a future career. Abhishek can be contacted via email at v0z55@students.keele.ac.uk

See website ‘Only a Game’ discuss the topic: Argues for Pistorius running.