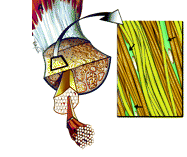 Historical note: This blog was first published in 2011 when the paper had 5,000 views. The numbers have been updated in April 2016.

OK – I begin with a ‘competing interest’ statement – I’m blogging about a paper I coauthored. But, I think it is my first such post since we started blogging seriously at BJSM (2009). The objective measure is that the paper has been downloaded close to 90,000 times in full text and PDF. (Thanks Mum!).

Seriously though, there is increasing level 1 evidence that exercise is a powerful therapy for musculoskeletal conditions – for muscle strains, joint degeneration, sciatica, not to mention (shh! tendon injuries). The historical rationale to explain the mechanism of this was ‘strengthening’.

Mechanotransduction is a well-recognized physiological principle that should have much more traction in physiotherapy/physical therapy courses and in medicine. This is how the body adapts itself to load. Why are Arnold Schwarzenegger’s muscles bigger than mine? His workouts signal his cells to hypertrophy and and multiply as needed and he gets bigger muscles. Mechanotransduction is the process. If it were genetics (the big myth!) it would mean he could have stopped working out from age 5 and have the body of a muscle-man.

The proximal phalanx of a negligent sawmiller – who has lost his distal phalanx — is vastly smaller than his or her intact proximal phalanges. Same hand, same genetics — less loading. Mechanotherapy trumps genetics! Note examples from different tissues – mechanotherapy is a universal principle. It’s why an elite distance runner has larger pipes than a sedentary academics about to have a cardiac arrest.

When clinicians prescribe exercise, the loading signals cell to repair and to function in response to load. Turning movement into repair.

Know that there is a very well-established scientific basis underpinning the success. Incontrovertible. (3851 citations in Pubmed). Stick with it – it can take time to work fully. Avoid the temptation to switch to snake-oil formulas or funky treatments. Trust in millions of year of evolution. The folks who couldn’t repair their injuries while moving on to the next feeding grounds aren’t with us any more. Mechanotherapy provides a powerful survival benefit!