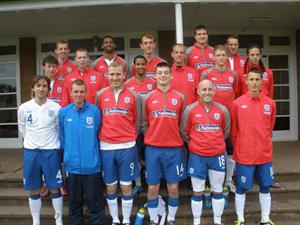 The athletes are supported by the FA in the same manner as any of the England football squads. Arguably the preparation is far more challenging as all eligible athletes are at very high risk of injury, resulting in conditioning akin to walking a tightrope in high heels. Research in the sport is almost non-existent and our understanding of the demands of the game is evolving fast. We are supported by sports science in both applied and research modalities – great assets to the medical team, who, unlike the athletes, are continually forced to think outside the box.

If only the staff looked after themselves as well as the athletes. Pre-tournament staff preparation involved surgery on a overused wrist, arthritic deconditioned hips from poor wicket keeping technique, a ruptured Achilles in an aging footballer with Peter Pan syndrome, a kit manager with an ataxic fall and bruised ribs and piles of coaching staff in dire need of more fibre. The positive effect on team morale and banter is relentless.

Most of our athletes have either congenital cerebral palsy (hemplegia, quadriplegia or mixed) and several have had brain injuries, ranging from minor with chronic neurological deficit (‘extra pyramidal syndrome’) to massive brain injury. Indeed several of our athletes are lucky to be alive let alone able to play football to such a high standard.

All competitions begin with athlete classification to assess neurological signs and impairment to football ability.  The team doctor and physiotherapist accompany the players through this process and act as advocates to assist the classifiers. It also helps with preparing protests if required. Classification is often perceived as a subjective process, but we have prepared well in advance for all eventualities. There is no room for surprises. Unexpected classification decisions affect the team dynamics and the coaches ability to chose their team. However, one of our new athletes in his late 20’s, with a highly skilled manual job, was told during classification that he had cerebral palsy in his hands. This needed to be managed carefully and positively with only 2 days to the first game. Athletes are classed from 5-8 (5 being most affected and 8 being the least affected). At any time a team must field one athlete who is either classed as a 5 or 6 and a maximum of two 8’s at any time.

Training sessions went well, apart from several staff members making up the numbers and underperforming, through lack of talent and fitness. Not wanting to mention any names but our Team Manager and performance analyst fell into both categories and were humiliated by being the first members of staff to be substituted during training. The banter and psychological fallout remain immensely entertaining.

Story to be continued next week…

After this tournament the preparation as Team GB for the 2012 Paralympics begins in earnest. If readers have any patients, friends of relatives for whom this may be of interest please signpost them to Jeff Davis at the FA Jeff.Davis@TheFA.com