Abstract: The current consensus recommendations for fluid intake have been examined and found to be false or inapplicable in the situations for which they are recommended.  The dangers to the people and the environment are detailed and the vested interests perpetuating these recommendations described.

Scientists studying fluid balance in humans have produced consensus recommendations for fluid intake needs for humans.  Are these statements valid?

In 1945, research showed that human beings lose about 2.5 l per day of fluid.  The recommendation that “a suitable allowance of water for adults is 2.5 l per day” was concluded by the observation that “Most of this quantity is contained in prepared foods”  [1].  This last sentence has been generally ignored, and an article, written in a journal called American Fitness [2], stated that, according to “most authorities” (unspecified) 8 glasses each of 8 fluid ounces (total 3.7l) of water per day is necessary for sedentary people.  This excludes caffeinated drinks.  The complete lack of evidence supporting this recommendation is exhaustively catalogued by Heinz Valtin in an invited review in the American Journal of Physiology [3].  Despite this, Campbell [4] quotes the figure that Americans only drink 48 fl oz bottled water per day, and states that an adult male needs to consume 3.7 l (125 fl oz) total water daily to remain healthy.  Infants, and those who are ill (a category including athletes [5]) do not meet their daily water needs by relying on thirst [4].  However she also states that most healthy people meet their daily water needs when they let thirst be their guide [4], and that healthy people are able to quickly compensate for over or underhydration [4].   In view of these points why should people not rely on thirst for hydration, and are athletes not healthy people?

In fact, man has evolved with kidneys which can conserve water by producing concentrated urine (reducing renal free water loss), and the osmotic threshold for the release of vasopressin (the enzyme which stimulates the kidneys to conserve fluid by concentrating the urine) is lower than that which stimulates thirst, which in turn is lower than the osmolality at which dehydration is considered to start [3].

This consensus, based on a combination of no evidence and selective selection of research results, is therefore invalid.

To maintain performance, athletes must drink during events. 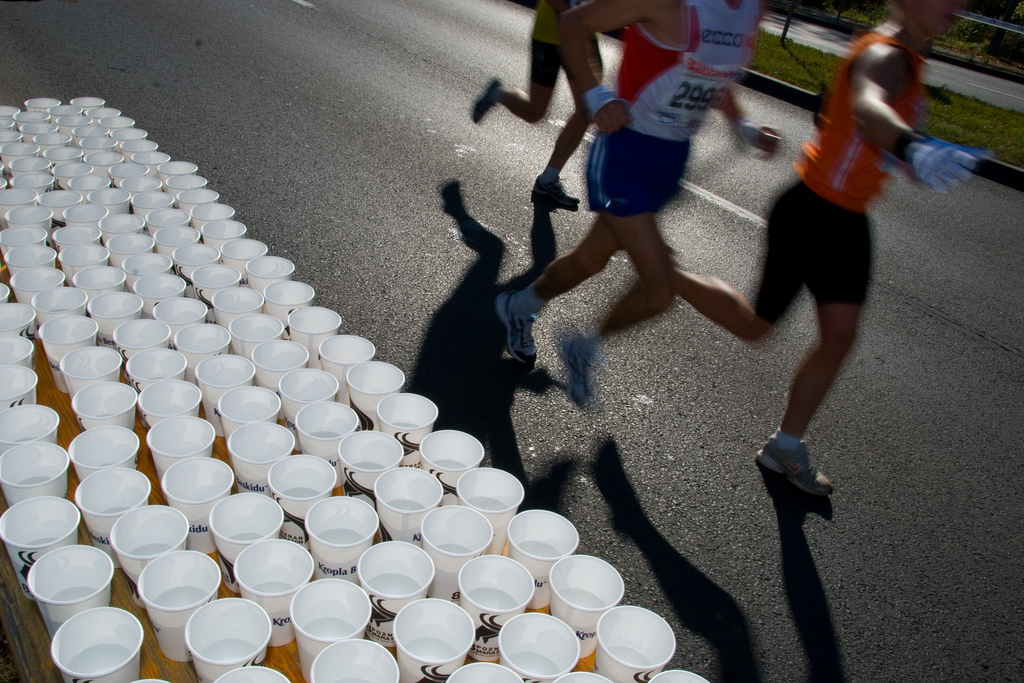 Laboratory experiments found that physical performance is markedly (10%) impaired by dehydration of -2% body weight, and therefore, contrary to previous recommendations, athletes should drink copiously during exercise [5].  However if the rate of intake of hypotonic fluids (water) exceeds renal free water excretion, hyponatraemia is inevitable [6].  Therefore when the consensus recommendation became universally applied, it led to cases of hyponatraemia, and some deaths [7].   Proponents of the consensus [5] ignore, or dismiss, the clinical observations [8] that in an ironman triathlon a weight (fluid) loss of 5.0 – 10.7% of body weight did not impair endurance performance.  In fact those losing most weight tended to have the fastest times.  Nor were increases in core temperature related to decreases in body weight [8].

The environment, and the physiological changes recorded in laboratory experiments, differ from those that occur in the ‘field’ situation [9,10].

In a “hot” laboratory, the only heat loss mechanisms are evaporation, plus some pendulum convective heat loss through limb movement.  By contrast in the “hot” field, there is air movement over the whole body.  The increased convective cooling will produce more efficient evaporation of sweat, with a reduced requirement for sweat production. The limited convective cooling in the laboratory will result in a higher sweat rate than in the field, through increased need for evaporative heat loss, and also through greater wastage of sweat, with more liquid sweat running off the body.

Because of time constraints inherent in laboratory studies, dehydration has to be induced rapidly prior to the exercise test.  Fluid loss is induced by a variety of methods, including using a diuretic [11].   Of the fluid containing compartments in the body, intracellular, intercellular and intravascular, fluid can only be rapidly removed from the intravascular space.  The laboratory subject therefore starts the exercise with a relative hypovolaemia rather than general dehydration. When the exercise starts, the reduced available circulating volume results in impairment of the mechanism for heat loss from the skin through having insufficient fluid to fill all the available skin capillaries. The core temperature will therefore rise faster than it would with a full circulating volume.  The pre-induced dehydration/hypovolaemia means that the heart will have to work harder than normal to provide circulation to the working muscles, and to the skin.   The cardiac output will reach maximum at a lower level of exercise than with a normal blood volume.

In the field, the athlete starts with a full circulating volume, with possibly some extra fluid.  As fluid is gradually lost from the circulation through sweating, and breathing, the exercise itself causes fluid transfer, first from the interstitial space into the intravascular space to replace the fluid loss [12], then, if fluid loss continues, fluid is transferred from inside the cells to the interstitial space [12]. Thus the endurance runner will finish the event with loss of fluid from the interstitial space, and possible slight dehydration of the cells, but with minimal depletion of the circulating fluid volume. There will therefore be adequate circulating volume to maintain a full circulation in the skin capillaries, with high skin temperature and maximum heat loss.   The heart would be under less stress.

Also, in any sport in the field, the athlete can use his brain, consciously or unconsciously, and adjust the speed and intensity of effort depending on “game strategy”, needs of the event [13-16], core temperature or heart rate.  In the laboratory the exercise schedule is pre-determined [13,16].

Man is poorly adapted for exercising in the heat.

Man must not develop any weight loss during exercise i.e. “zero dehydration” rule [17].

In fact, man evolved as a species able to run (hunt) for prolonged periods in the heat whilst maintaining a safe body temperature [18,19].  Even today populations like the Kung San in Namibia, who continue “persistent” hunts [20], have been tracked as they ran for 6 hours in temperatures between 40-45 oC while they drank little – less than 1 litre [20].

The conclusions reached as a result of the laboratory studies are valid as claimed.  However, the laboratory results are not valid when applied to the situation in the field. Athletes need to be advised to follow their thirst as they run rather than simply taking on fluid [6].

A whole supplement of the Journal of the American College of Nutrition [21] was devoted to studies, which showed that even mild “underhydration” had a deleterious effect on virtually every function of the human body and brain.  Are the results clinically as well as statistically significant, and are the subjects dehydrated or hypovolaemic?

The aim seems to be to establish the myth that, for health and performance, man must remain hydrated at all times.  If this fact was true, man would be the only species on earth with this requirement!! In reality [3] man has evolved to be able to perform well during mild dehydration (sometimes over considerable time), following which healthy man will always rehydrate, provided there is time and available fluid.

The drinks/sports drinks manufacturers make huge profits from the sale of rehydration fluids, soft drinks and bottled water.  (Bottled water, and tinned pet food, are the top two profit makers for supermarkets in the UK.)

The manufacturers keep their products in the limelight by sponsoring prestigious sporting events e.g. Coca Cola and the Olympic Games.

These scientists issue consensus statements [22], though the only people in the group are those with a history of supporting their particular position.

The proponents are insisting that laboratory studies can be projected straight into the field/clinical situation.

The overwhelming evidence of the danger of  hyponatraemia following overdrinking,  induced the American College of Sports Medicine (ACSM) to reduce its guidelines on the volumes of  water that should be drunk during exercise. Despite this, “scientifically based” advice in fitness magazines, websites and advertisements continues to give advice to drink far in excess of the official ACSM guidelines.  There is also international variation on website advice given by the same company – many websites still state “you can never drink enough” [23].

Murray [24] attacked opinions dissenting from the ‘established’ dogma on fluid intake during exercise, in a response titled “Manufactured arguments: turning consensus into controversy does not advance science.”  Surely that is precisely how science does advance!! Without it, we would still believe the world was flat.  This is an example of “contrarianism” in modern scientific debate [25].

1. There is a fear about not drinking enough (the worried well), and it is very common to see people carrying bottles of water wherever they go, and drinking at frequent intervals.

Bottled water in USA is no purer than tap water, and both may contain bacteria or carcinogens [3].  Therefore high water intake, bottled or tap, will increase one’s exposure to pollutants [3].

3. Endurance athletes, people using ecstasy, and even a high school football player have died from hyponatraemia [7,17,23] through following the consensus advice.

Hyponatraemia is causing problems in women in labour who drink lots of water [26].  Delivery becomes more difficult and is significantly linked with instrumental delivery and emergency Caesarean section for failure to progress.

4.  The insistence, on the need for all athletes to drink frequently, can impair performance in team competitions where endurance and sweating is not a problem e.g. curling.  Fluid overload will necessitate the athlete temporarily interrupting participation because of the need to empty the bladder [Personal Observation at Word Junior Curling Championship 2009], leaving the team weakened, and the prior discomfort of an overfull bladder may have a deleterious effect by disturbing concentration.

5.  Oestrogen-mimicking chemicals can leach into drinking water, and other beverages, from bottles made from certain plastics [27].

6. There is a massive environmental impact from the energy requirements in the manufacture of the plastic bottles, and the contents, which are often only water.  The disposal of the plastic bottles uses up landfill sites, and often disfigures beautifully scenic countryside.  (Metal and glass containers cause the same problems, plus, when broken or distorted, they can cause serious injuries.)  Even if disposed of at sea the effects are harmful.  Plastic bottles litter our beaches, and can last for 1000 years.  Plastic litter can be mistaken for food by 170 species of marine wildlife resulting in death through starvation, poisoning or stomach blockage.  Plastic is eventually ground down into granules which accumulate in the marine environment and release toxic chemicals into the sea water from where they enter the food chain [28,29].

“Consensus” – agreement in opinion (Chambers 20th Century Dictionary).  This does not require that the opinion is true, or factually correct.  “Consensus” must match all the known facts, and be open to change as new facts appear.  Problems arise if the consensus, despite strong evidence to the contrary, is strongly supported by a group with power, which may be political &/or financial.

7.  Noakes T, Speedy D.  Case proven: exercise associated hyponatraemia is due to overdrinking. So why did it take 20 years before the original evidence was accepted? Br J Sports Med  2006; 40: 567–572

21. Journal of the American College of Nutrition 2007; 26, Special supplement

Have ideas to contribute to the discussion of hydration in sport? Please leave your comment below or email: karim.khan@ubc.ca