We write to present alternative interpretations of the data published by Zouhal and colleagues, in the BJSM article: Inverse relationship between percentage body weight change and finishing time in 643 forty-two-kilometre marathon runners 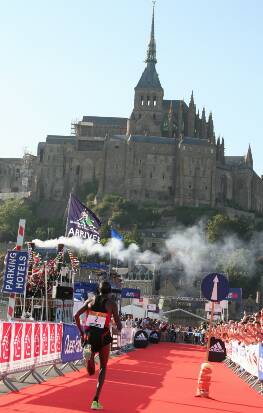 The Abstract states that "... these  data are not compatible with laboratory-derived data suggesting that BW [body weight] loss greater than 2% during exercise impairs athletic performance."  We agree, but not for the reason proposed in this paper.

Figure 2, which is critical to the findings of this publication, presents an intra-individual group relationship; laboratory studies regarding the influence of dehydration on exercise performance utilize an individual as his/her own control.  The cross-sectional trend in Figure 2, which arose from a single field study, should not be equated with a randomized, controlled, repeated measures experimental design. 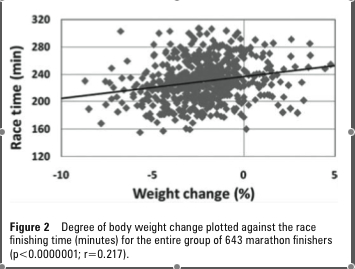 Further, percent body weight change accounted for only 4.7% of the variance in race time (r2 = 0.047).  We believe that this relationship is weak because endurance exercise performance is influenced by training, diet, psychological state, years of experience, age, and numerous other factors which interact in complex ways 2.  Further, the 2009 Mont Saint-Michel marathon was run in air temperatures ranging from 9 to 16?C (Table 1).  In a hot environment, runners who drink less (i.e., 6% of runners lost 6 - 8% body weight loss, see Fig. 1) increase their risk of exertional heat exhaustion and heatstroke 4.  This medical advice is noticeably absent, as a qualification to the concept that "the fastest runners lost the most weight." 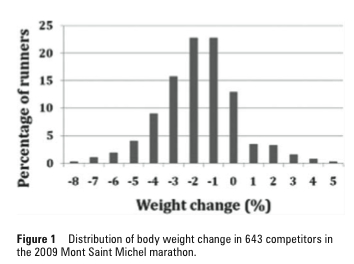 Three other factors likely complicated the relationship between body weight change (%) and race time (min).  Firstly, approximately 78% of the 643 runners lost weight.  Sweat loss, of course, was part of their total body water deficits, but was not considered in the interpretation of
Figure 2.  Similarly, we note that pre-race excretion is not mentioned. This would amplify reported body weight changes because runners void bladder and bowl as the race start nears.  Body weight was measured between 90 and 60 min before the race, and thus weight loss due to pre-race elimination of urine and feces was unknown in Figure 2.  Thirdly, we examined numerous online photos of competitors in the 2009 Mont Saint-Michel marathon.  On the basis of our previous experiences at marathon events, we expected that front runners would wear less clothing than slow runners.  This trend was evident.  Thus sweat-soaked clothing, which had been dry at the starting line, represented an additional unmeasured component of the body weight variance in Figure 2.

Much text concerns drinking, biological signals and thirst, however none of these variables were measured during the present study.  Thus it is invalid and speculative to state, "... athletes will not wilfully (sic) ignore their thirst when fluid is available in excess...", or to state, "... the only conclusion can be that these 'dehydrated' athletes were drinking according to their innate biological signals..."  What evidence supports these statements besides a range of body weight change?  It is widely appreciated that athletes ignore innate biological signals (e.g., pain, fatigue, perceived exertion) during competition, to optimize performance.  This issue is further complicated by the fact that thirst sensation and drinking behavior are influenced by numerous host factors (e.g., stomach distention, plasma osmolality, oropharyngeal reflexes), the environment, and fluid characteristics (e.g., saltiness, sweetness) 3.
Therefore it is impossible, from the data of Zouhal et al. 1, to formulate substantiated conclusions about the relationship between body weight change and thirst, or between performance and thirst.

Fluid overload and illness are considered in the Introduction and Discussion sections.  However, these concepts are misplaced, in that neither symptomatic exertional hyponatremia (EHS) nor fluid intake were reported for any of these 643 runners, including those who gained 3 - 4%
of body weight (2.2 - 2.9 kg, Fig. 2).  Because the data of this paper focus on performance, not illness, and because &gt; 90% of participants did not gain weight, we believe that the following question is more relevant to competitors, "Is finish time faster or slower when a runner is
mildly dehydrated (1 - 2% body weight loss) than when she/he is severely dehydrated (&gt;5% body weight loss)?"  It is impossible for group trends (Fig. 2, Tables 3 and 4) to answer this question.

Finally, the interpretations of Tables 3 and 4 (which present the same concept, in reverse order) fail to consider differences between the fastest and slowest runners.  Exercise intensity and duration affect the volume of fluid consumed during a race.  Front runners (i.e., those who
finish 42.1 km in 160 min) experience a high ventilation rate (e.g., &gt;120 L/min) that precludes consuming water, out of concern for inhalation and coughing; they also are conscious of time spent at aid stations.  In contrast, back-of-the-pack runners typically spend more time
at aid stations, drink more often, walk during part of the race, and have a greater requirement for exogenous carbohydrate (i.e., 30 - 60 g*h-1, mostly in fluids 5) because they are on the course for more than 5 h. Thus, we believe that an alternative interpretation (i.e., "During a marathon, fast runners drink less than slow runners.") is superior to the published conclusion, "body weight loss during a marathon race may be ergogenic".

Conflict of Interest: None declared