Look, I know that Twitter really isn’t the place for nuanced debate.  But, by that token, everyone else should realise that as well – especially intellectual superstars. So how, then, to explain Richard Dawkins’ spectacular foot-in-mouth moment earlier today? It started off reasonably enough, with him tweeting about Catholicism’s stance on abortion and providing a link to this piece by Jerry Coyne in the New Republic; lots of people are going to agree with both Coyne and Dawkins, and lots to disagree, but we should expect that.  The tweet got a couple of replies.  I can’t be bothered transcribing them, but here’s a screenshot; you should be able to click to enbiggen it. 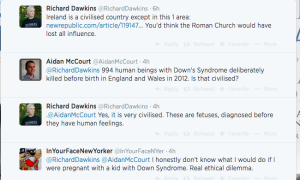 So far so good.  Dawkins’ reply is about as good a version of the sentience argument that you could cram into 140 characters; and InYourFaceNewYorker’s point articulates a problem faced by any number of women who are carrying a child with a disability of some kind.  (Well, by any number of parents, I suppose, except that it’s women who hold the moral trump here simply by dint of being the one carrying it.  Fathers could agonise about the best thing to do, too; it’s just that they don’t get to make the final decision.  Oh, you know what I mean.)  Where you stand on abortion doesn’t preclude recognising that it’s a genuine moral dilemma for many people, and a that there are respectable arguments and proponents of those arguments on both sides – by which I mean that people on either side should be able to recognise that their opponents are at the very least worth the effort of an argument. InYourFaceNewYorker goes on to articulate some of the aspects of the debate that make it so emotive and so intellectually rich: 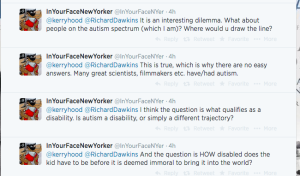 That doesn’t reflect Dawkins’ response to the dilemma, though.  Brace yourselves.

Oh, crikey.  He actually said it. I don’t want to raise the spectre of The Paper Of Which We Do Not Speak, or even to delve into questions of procreative beneficence; what’s important about this is a deeply stupid thing to say in its own right.  After all, you can think what you like about the permissibility of abortion, but I don’t think that anyone is really suggesting that a woman who is pregnant ought to abort.  The most defenders of abortion would want to say is that it’s permissible to abort.  Procreative beneficence says that you ought to select against “disabled” embryos if only one can be implanted and one is going to be implanted; but it doesn’t say that you ought to terminate a once-begun pregnancy. Nor should it: to make that kind of statement is indefensible for more or less the same reason as a statement to the effect that a woman isn’t allowed to have an abortion – to wit, there’s light years between a right to abort and a duty to abort.  The former is about a woman’s ability to choose what kind of pregnancy she has, and what kind of child she’s willing to gestate; the latter is… well, it’s the opposite of that.  Choice is minimised.

(There’ll be some who think that the fact that it’s a man narrowing choices like this adds an extra layer of objectionableness to this.  I’m not so bothered about that: I think that the problem is basically to do with one person telling another what she can and can’t do with her body, and the chromosomes of the speaker really aren’t all that important.)

You’d’ve thought that someone as clever as Dawkins could see that.  Apparently not. For a bonus, there’s further joy from him in the same thread.  Someone says this:

Granted, it’s not the most decisive point.  But Dawkins’ reply…

Good grief. Go back to my opening gambit here.  There isn’t room for nuance on twitter.  That means that you have to think quite hard about what you’re saying – especially if you’re Richard Dawkins, and especially on a topic like this.   (Thanks to Ophelia for the lead…)