We’ve not had a film review here before, have we? 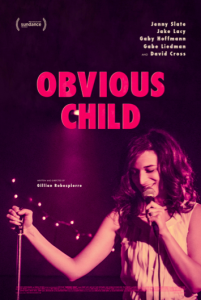 As far as I can tell, the ratio of talked-about-ness to actual screenings of Obvious Child is unusually high; it doesn’t seem to have got all that much time in mainstream cinemas, which meant that I had to schlep along to Manchester’s Cornerhouse to see it.  (I have a theory about cinemas, which is that the artistic quality of the establishment is inversely proportional to the comfort of the seating.  The Cornerhouse is a nice example of this rule in action.)  Why it’s attracted so much attention is captured in the elevator pitch: it’s a romantic comedy about abortion.  It certainly got certain elements of the US commentariat all excited – RightWingWatch has a nice little compilation here – though admittedly, as far as I can tell, the objections haven’t been matched in the UK, where the emphasis has been much more along the lines of “It’s that film that got the American right all antsy”.

I can see why certain sectors of the commentariat have got upset about it; the film is remarkable in just how down-to-earth its handling of the plot is.  The plot is dead simple: a woman (Donna, played by Jenny Slate) loses her boyfriend and her job within the space of about three frames, gets drunk, has a one-night-stand, gets pregnant, decides to have an abortion, lets the father of the child know all this in the course of a stand-up routine, has that abortion, then decides to watch Gone with the Wind.  It’s that straightforward.

For Donna, it’s less a matter of obvious children than obvious decisions.  She doesn’t want to be pregnant, and sets about not being.  There’s no indication that she’ll regret the decision; there’re no lingering shots of Donna agonising over whether it’s the right thing to do; the father (Max, played by Jake Lacy) says he wants to be a grandfather in passing, but doesn’t try to talk her out of it, or even insist that he should have a say.  Donna is a little nervous about the procedure – but then, it makes sense to be a little nervous about having a mole removed or any other minor surgery.  There’s no moral freight, though.  Donna is not irresponsible – I mean, she might have done something a bit irresponsible in not taking more care with the contraception, but that’s a shared thing with Max; and making a decision about what to do in the wake of having done something a bit daft is responsible.

In other words, Obvious Child is just about a person making a decision.

And that’s quite refreshing.  Quite a lot of pro-choice arguments allow that the decision to terminate a pregnancy is a big one; but I wonder whether that concedes a lot – too much – to the anti-abortion side.  There’s no reason why deciding to abort has to be a big deal, especially when it’s only weeks into the pregnancy and the foetus’d be barely visible anyway.  Maybe that’s what’s upset a lot of people: not so much that she has an abortion, but that the narrative about it being a hard decision that might be regretted is punctured.

Indeed, when the doctor whom Donna approaches starts wittering on about alternatives, you want to yell at the screen: when an articulate and coherent and obviously competent woman says “I want an abortion”, which part of that don’t you understand?  The real scandal here is that a minor medical procedure might set her back a month’s rent.  But, hey, there’s a free HIV test thrown in…

Oh: the other thing about the film – which is definitely to be recommended – is that it’s laugh-out-loud funny, and not ashamed to be clever.  Donna is a stand-up comic by night; her routines are possibly the least funny part of the film – except, ironically enough, the one that’s supposed to be a disaster.  (I’m not sure if she’s supposed to be a B-grade comic, or whether it’s just hard to write a pretend standup routine; it could easily be the latter.)  During the day, she works at a shop called “Unoppressive Non-Imperialist Books”; Max is presented as a whitebread MBA type, but he’s read Bolaño.  Elsewhere, it’s rude, embarrassing, and gloriously brazen.  There’re fart noises, and there’s a polysyllabic vocabulary: this is scatological humour for people who listen to Between the Ears.  Because even if you think that having a termination is a big deal, life is still absurd, and your brain doesn’t switch off.  Donna isn’t just a baby-vat.

Open notes in patient care: confining deceptive placebos to the past?

How can we decide a fair allocation of healthcare resources during a pandemic?