Last week I analysed citations in the Oxford English Dictionary (OED) taken from the Oxford Textbook of Medicine (OTM). This week I have looked at OED citations taken from The BMJ.

The numbers of citations are shown in Table 1, with data from other journals for comparison. Although The Lancet outguns The BMJ in both the numbers of total citations included in the OED and the numbers of citations that are listed as being the earliest under the relevant headwords, my experience in searching for antedatings of OED entries, i.e. citations that predate the citations currently included, has been that The BMJ is the most frequent source. For example, when I looked for antedatings of words listed in the OED that first appeared in print during 1970–9, I found 60, of which ten were in The BMJ, six in PNAS, and none from the other journals listed in Table 1. The most striking example was the Chinese term tui na, with an antedating of 84 years, from 1979 to 1895; the source was The BMJ. Of the antedatings that I have found in the OTM corpus, about 40 in all, half are from The BMJ.

Table 1. The numbers of citations in the OED from five different general medical journals 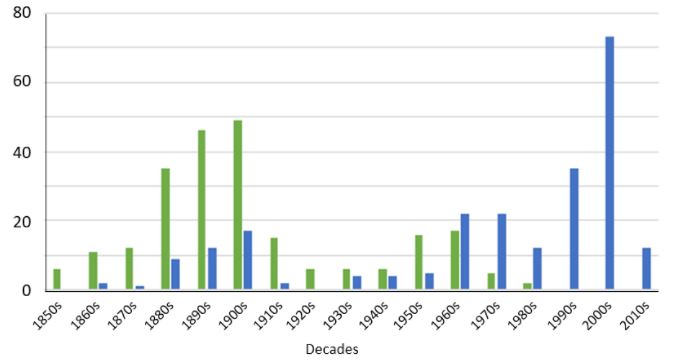 Figure 1. The distributions of the numbers of first and last citations under each of 230 headwords in the OED for which The BMJ citation is the earliest; the green bars show the dates of the earliest citations, peaking in 1880–1909, with a smaller peak in 1950–1969; the blue bars show the numbers of citations that are the last in each entry; the words whose dates appear to the left can be regarded as rare or obsolete, although a few can be postdated to later times

Going further back, to the Provincial Medical and Surgical Journal, which is what The BMJ was originally called (until 1857), we find three more citations: “imperforated” (1841), “retropharyngeal” (1843; the earliest citation), and “empiricism” (1846); all are still in use.

There is a large amount of pharmacological interest in the corpus. In all, 55 of the items are medicines or antiseptics or compounds that are or have been used therapeutically in some way (Table 2); in seven cases they are identified by their brand names, such as Stelazine (1958), an antipsychotic phenothiazine whose International Nonproprietary Name is trifluoperazine.

Table 2. Items of pharmacological interest that are headwords in the OED for which The BMJ provides the earliest instances 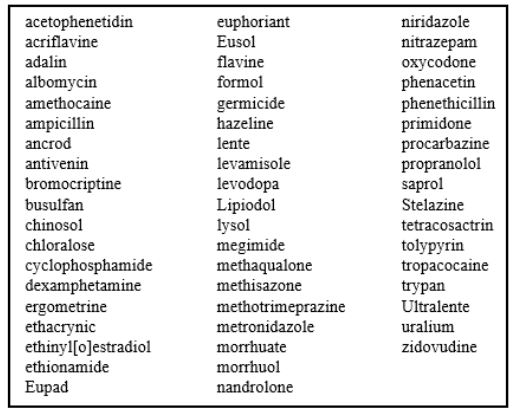 Seventeen of the terms are hapax legomena, i.e. words for which only one quotation is recorded. However, these are not necessarily nonce-words, words that have been used only once. For example, the OED accords “colporrhaphy” only a single quotation from The BMJ in 1902, but the term is still widely used today, even in The BMJ. It can also be antedated to 1889, in The BMJ of course.

It is only occasionally possible to determine who invented a word. Although in most cases the true earliest written instances have been found, words are often in verbal currency before they appear in print. Furthermore, an author who is the first to use the word in print may have got it from someone else. And the OED often omits the names of original authors in citations from journals; in this corpus of 230 citations, the authors are named in only 25 cases. However, there is one striking case of identified authorship. In 1941, at a meeting of the Association of Physicians of Great Britain & Ireland, Henry Cohen (later Lord Cohen of Birkenhead) proposed names for three forms of nerve damage, neurotmesis, axonotmesis, and neurapraxia (Figure 2). The first and last of those have found their way into the dictionary. Why “axonotmesis”, a word that is still in current use (e.g. here), is not included is a puzzle. 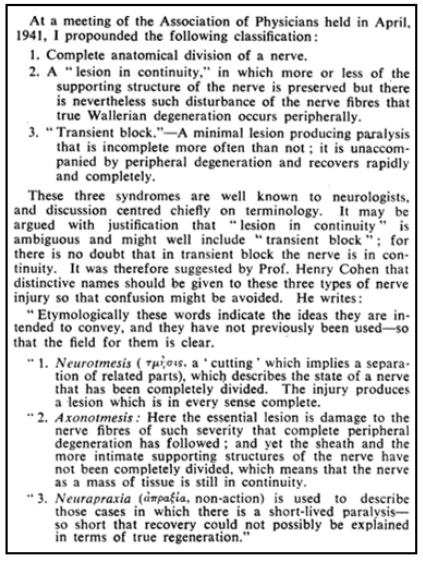 Figure 2. An extract from The BMJ, 29 August 1942, from a paper by H[erbert] J[ohn] Seddon, Nuffield Professor of Orthopaedic Surgery in the University of Oxford, titled “A classification of nerve injuries”, detailing Henry Cohen’s contribution to neurological nomenclature

The BMJ makes one other appearance in the OED (making 2633 hits in all): a note in the etymological section under “ovariotomy”, which appeared when the dictionary was called the New English Dictionary (NED); the note reads: “N.E.D.’s entry for ovariotomics was the result of a misreading of ‘ovariotomy’ in Brit. Med. Jrnl. (1882) 28 Jan. 184” (Figure 3). Indeed, in the NED, Volume VII, O, P, published in 1909, “ovariotomics ” was defined as “the theory or practice of ovariotomy”, illustrated by a supposed quotation from The BMJ: “1882 Brit Med Jrnl 28 Jan 184 At last listerism was applied to ovariotomics”. What is odd about this entry is that page 184 does not exist in the issue of 28 January 1882. The quote can be found on page 184, but in the issue for 11 February, and it does indeed refer to “ovariotomy”. A further correction is needed.

Figure 3. The entry (left) for “ovariotomy” from Volume VII of the New English Dictionary (1909), with the citation from The BMJ at the end, attributed to 28 January 1882, misquoting and misdating the original entry on page 184 of The BMJ on 11 February 1882 (right)