As I observed in my last column, fewer and fewer new biomedical words can be found in the Oxford English Dictionary (OED) as we go through the 1990s (and indeed, fewer new words altogether). This week, therefore, I have combined the years 1992–5 inclusive (Table 1).

Table 1. Biomedical words (n=31) in the OED for which the earliest citations are from 1992–5 inclusive (out of a total of 402); I have found one antedating (three years) 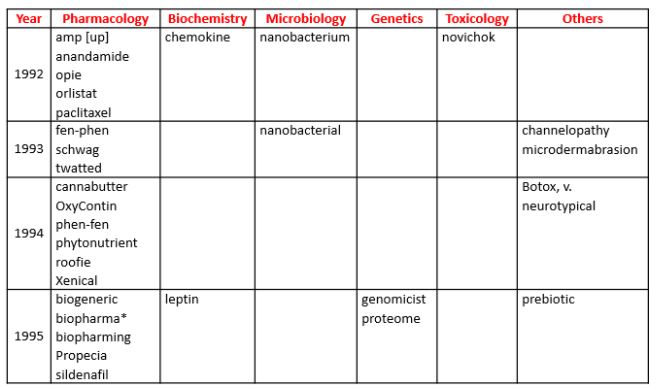 Antedatings are also becoming more difficult to find, and I have found only one, and a minor one at that, in this tranche, biopharma. However, another word deserves attention, because of its antecedents—neurotypical. It is defined in the OED as “Neurologically typical; specifically exhibiting ordinary, as opposed to autistic, thinking and behaviour”. However, a later development, “neuroatypical”, is not included. Nor are there entries for the earlier words “neurotypy” and “neurotypic”, which, although related, have different meanings. Neurotypy was defined by Sternberger et al in 1982 as regional individuality in neurons of the brain, which they observed in rats, describing the changes as “neurotypic”.

But the most common theme in this set of words is obesity: leptin, prebiotics, anandamide, fen-phen and phen-fen, orlistat and Xenical, all on the list, all have associations.

Leptin, from the Greek adjective λεπτός, thin, was originally identified as the product of the ob gene in mice. It was later found in humans and other species. It is expressed only in adipose tissue and is involved in the regulation of appetite and storage of fat.

Prebiotics have been suggested to be potentially useful in treating obesity because of supposed effects on the gut microbiome; good evidence is awaited.

Anandamide is an endogenous arachidonic acid derivative (N-arachidonylethanolamide), a neurotransmitter that activates cannabinoid receptors. The name comes from a Sanskrit word for bliss, ānandaḥ. It is present in many tissues in the body and in such small amounts in chocolate that you would have to eat 25 kg to achieve a noticeable “high”. Anandamide is orexigenic, i.e. it stimulates the appetite, and in experimental animals dietary linoleic acid increases plasma anandamide concentrations and causes obesity. It is involved in the regulation of food intake and acts as a hunger signal in the intestine, where its concentrations are increased by food deprivation. Plasma concentrations of anandamide are also related to the weight loss-inducing effect of the cannabinoid CB1 receptor inverse agonist rimonabant.

Rimonabant was developed in the hope of treating obesity. In a review of about 30 such medicines, we found that 25 had been withdrawn from the market between 1964 and 2009 because of adverse drug reactions; 23 acted on monoamine neurotransmitters. Psychiatric disturbances, cardiotoxicity (mainly attributable to monoamine re-uptake inhibitors), and drug abuse or dependence (mainly attributable to neurotransmitter releasing agents) together accounted for 83% of withdrawals. Deaths were reportedly associated with seven products.

One of those 23, fen-phen, or phen-fen, a combination of fenfluramine and phentermine, both monoamine releasing drugs, was withdrawn from the market in 1997 because it caused pulmonary hypertension and damage to cardiac valves.

In a review of the effects of another centrally acting drug, lorcaserin, a 5HT2c receptor agonist, Igho Onakpoya and I concluded that it caused minimal weight loss, that its harms profile was as yet incompletely understood, and that it was unlikely to be a cost-effective intervention. A few months later, the FDA asked the manufacturer to withdraw lorcaserin from the market “because a safety clinical trial shows an increased occurrence of cancer”.

In a recent small randomized study, funded by the manufacturers, supervised exercise plus daily subcutaneous liraglutide for 1 year in selected subjects, who had lost weight during an 8-week 800 kcal diet, caused a mean weight reduction of 9.5 kg compared with placebo.

Liraglutide is one of a group of drugs, exenatide, liraglutide, lixisenatide, albiglutide, dulaglutide, and semaglutide, that activate GLP-1 (glucagon-like peptide-1) receptors, increasing insulin secretion, reducing glucagon secretion, and slowing gastric emptying. We shall have to wait to see whether the weight-reducing effects of liraglutide + exercise also occur in the long term in general use and whether its benefit-harm balance is favourable.