I have now reached 1985 in my survey of words whose first citations listed in the Oxford English Dictionary are from years spanning my 50 years as a physician. Four of them are to do with reproduction (Table 1). 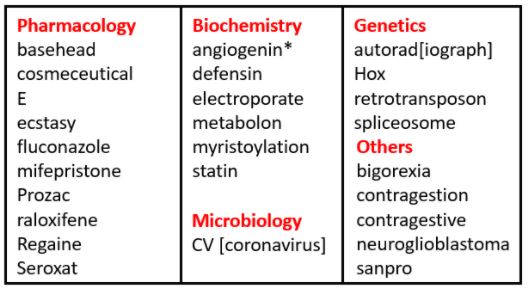 First is mifepristone, which is used in combination with misoprostol in elective termination of pregnancy. Misoprostol featured in the 1977 list. These generic names, both International Non-proprietary Names, approved by the World Health Organization (WHO), are derived variously, like many other drug names, from elements of their chemical names, structural features, and pharmacological associations. Misoprostol, for example, is an analogue of prostaglandin E1, and its name comes from the initial m in methyl, + iso (implying a mixture of stereoisomers) + prost[aglandin] + ol (implying an alcohol, in which an –OH group is attached to an acyclic carbon atom). Mifepristone probably comes from elements in its chemical name: mi-fe- from -aminophenyl- and -pristone from –propynylestradienone, –one implying a ketone, R–C=O.

The earliest instance that I have found of any of these is for contragestation, found in an abstract published in Marriage and Family Living in November 1956: “Catholic moral teaching rules out absolutely as means of fertility regulation any suppression of life once conception has taken place, whether this be by abortion, contragestation, or contranidation.” These terms have been defined elsewhere:

The 1956 abstract is the earliest instance I have found of contranidation, which is also absent from the OED.

The earliest instance of contraprogestational I have found is in a 1970 Annual Report of the US Population Council.

The IndoEuropean root GER or GES meant to carry on, to act, or to do. The Latin word gerere (past participle gestum) had many meanings, including to carry, contain, entertain or harbor feelings, show in one’s expression, play a part, conduct business, transact, or administer, and to spend time. Many English derivatives (Table 2) reflect these meanings. 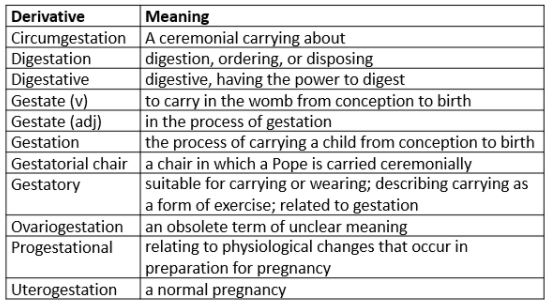 The last entry in the 1985 list (Table 1), “sanpro”, is advertising jargon for “sanitary protection”, used to refer to hand sanitizers, now ubiquitous, as well as pads for feminine hygiene.

At the start of the coronavirus epidemic, temporary legislation was passed allowing women to have pharmacologically induced elective terminations of pregnancies at home, assisted by telephone and video conferencing.

Coincidentally, this week we have learnt about a cohort study of 52 142 medical abortions in the UK (85% of the national total), using data from electronic records and incident databases, in which in‐person treatment with mifepristone plus an ultrasound scan followed by misoprostol at home (n=22 158) was compared with a telemedicine‐hybrid model, either in person or via telemedicine without ultrasound (n=29 984). The latter was reportedly effective, safe, and acceptable, and improved access to care. Mean waiting time from referral to treatment was reduced by a mean of 4.2 days in the telemedicine‐hybrid model and more abortions were provided at ≤6 weeks’ gestation. There were no differences in treatment successes, serious adverse events, or the incidence of ectopic pregnancies.

There is therefore a case, based on these and previous results in similar studies, for making the temporary legislation permanent for pregnancies of less than 10 weeks duration.