Some of the biomedical words first cited from 1978 in the Oxford English Dictionary (OED) (Table 1) are connected with calcium—nimodipine, calmodulin, and alfacalcidol. 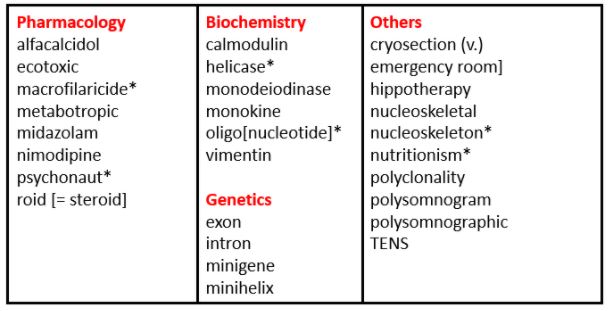 Nimodipine is a one of several me-too dihydropyridine calcium channel blockers (Figure 1). The first in class drug, nifedipine, was named from a contraction of its chemical name, dimethyl 2,6-dimethyl-4-(2-nitrophenyl)-1,4-dihydropyridine-3,5-dicarboxylate: “ni” from nitro, “fe” from phenyl, and “dipine” from dihydropyridine.

Figure 1. Dihydropyridine calcium channel blockers and their approximate dates of introduction into clinical use; the structure of nimodipine is shown

Calmodulin is an endogenous calcium-binding peptide (148 amino acids long), activated by complexing with up to four calcium ions. It regulates such cellular mechanisms as kinases and phosphorylases, ion channels, and muscle contraction. The name was suggested by Cheung, Lynch, and Wallace in 1978: “… the activator may serve as a Ca2+ mediator, or as a Ca2+-dependent modulator [and] may be designated calmodulin.” The name is a contraction of “calcium-modulated protein”.

Figure 2. Members of the vitamin D family; the structure of alfacalcidol is shown 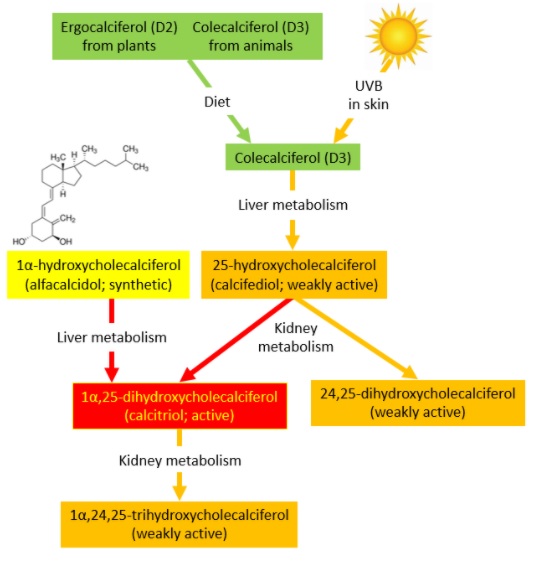 The Greek word ῥαχις meant the spine. Add –itis and you get rachitis, inflammation of the spine. But in 1650 the physician and anatomist Francis Glisson (1597–1677), in a treatise curiously titled, in a mixture of Latin and English, De rachitide, sive, morbo puerili qui vulgo the rickets dicitur, tractatus [On the treatment of rachitis, a children’s disease, commonly called rickets], appropriated the word to provide a term, hitherto uncoined, more scientific than “rickets”. He thought that the fault lay in the spinal marrow, The similarity between “rachitis” and “rickets” is probably coincidental; the origin of the latter is not known.

In 1931 T C Angus and colleagues reported that they had prepared a crystalline substance by vacuum distillation of irradiated ergosterol, previously prepared in smaller quantities by Askew and colleagues, and had shown it to have antirachitic properties: “We think the provisional adoption of a name is justified … and suggest “Calciferol” in view of the high antirachitic activity of the substance”. Their extract was later shown to contain calciferol and two inactive sterols. The name, which implies transport of calcium, gives rise to the names of other members of the family. Colecalciferol is so called because cholesterol is a precursor.

Trials have been registered describing the use of vitamin D in prevention and treatment of covid-19. Most involve high doses of colecalciferol. A pilot study in 76 patients, described as “open label, double-masked”, has suggested that calcifediol (25-hydroxycholecalciferol) may reduce mortality, but the results of a large randomized double-masked trial are awaited.

Meanwhile, some are advocating vitamin D supplements, in the hope of preventing covid-19, especially since synthesis of vitamin D in the skin is reduced in the absence of sunlight in the winter. Over-the-counter oral supplements typically provide colecalciferol (vitamin D3) in varying doses; 400 iu (10 micrograms) a day should be sufficient to prevent deficiency in those who absorb it. For treatment of deficiency 800 iu/day is sufficient. Higher doses can cause adverse effects.