My column on ivermectin, published two weeks ago, has elicited a few comments, mostly pseudonymous. This prompts me to outline some relevant pharmacokinetic and pharmacodynamic principles, starting with the former.

The word pharmacokinetics comes from two Greek words, ϕάρμᾰκον and κῑνητικός (Figure 1). The former, whose earlier origin is unknown, originally meant an enchantment or spell, and hence an enchanted poison. In Book 10 of the Odyssey we learn that Circe prepares a magic potion with which to tame the wild beasts on her island and to bring Odysseus and his men under her spell. But Hermes gives Odysseus an antidote, μῶλυ or moly, later identified with garlic, Allium sativum. Thus, ϕάρμᾰκον came to mean any medicinal product or drug. The word was used in different collocations, such as ϕάρμᾰκον νόσου, a remedy for a disease, and ϕάρμᾰκον ὑγιείας, a remedy to maintain health. The phrase τοξικὸν ϕάρμακον originally meant a poisoned arrow, such as Paris used to kill Achilles; τόξον is a bow, and the plural, τόξα, is the bow and arrows. When the phrase was shortened to τοξικὸν, its meaning transferred from the bow to the poison, giving us words such as toxin, toxic, and toxicology.

Kinetic comes from the Greek noun κίνησις, motion, from the IndoEuropean root KEIƏ, to set in motion (Figure 1). 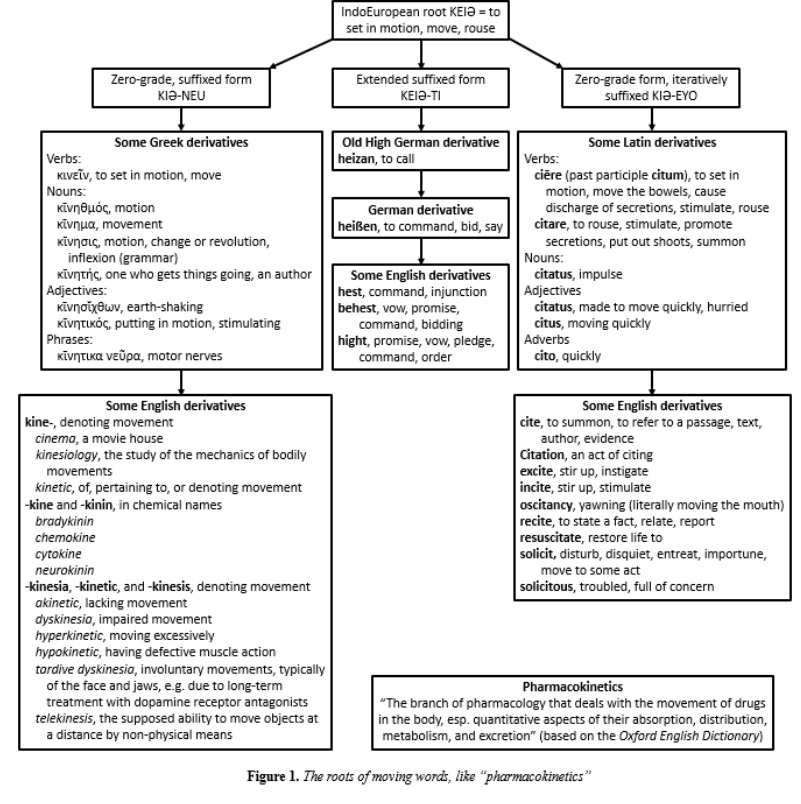 So pharmacokinetics is the study of the movement of drugs around the body. The term was introduced in the 1950s (Figure 2) and it encompasses what is commonly called ADME, which stands for absorption, distribution, metabolism, and excretion. The last two can be combined under the heading of clearance.

In most cases the rates at which these processes occur are exponential and associated with half-times. For example, there is generally a half-time of absorption from the gut after oral administration; in one half-time half of the dose will be absorbed, assuming complete absorption; in two half-times 75%; in three half-times 87.5%, and so on. By the time five half-times have elapsed, most of the drug (about 97%) will have been absorbed.

After a drug passes the twin barriers of the gut and the liver, it appears in the blood, and is distributed to the tissues. Then, as clearance mechanisms start to dominate, and the drug disappears from the body, the blood concentrations start to fall, also exponentially, with an elimination half-time, colloquially known as the half-life. By the time five half-lives have elapsed, most of the drug (about 97%) will have been eliminated. I discussed these processes a few weeks ago (here and here) when describing different types of exponential change.

Now consider ivermectin. Maximum plasma ivermectin concentrations (C) after a dose (D) of 150 micrograms/kg, as used to treat onchocerciasis, are about 45 nanomol/L (40 ng/mL), consistent with its apparent volume of distribution (V) of 3.5 L/kg (C = D/V). The concentration required to inhibit viral growth in vitro (IC50) is 2–3 micromol/L, about a 60-fold difference, suggesting that a single dose is unlikely to be effective, even if higher doses (e.g. 2000 micrograms/kg) are used. Given an elimination half-life of about 18 hours, repeated daily doses of 2000 micrograms/kg for 15 days (four half-lives), neither a regular dose nor mode of administration, could result in steady-state plasma concentrations of 0.7 micromol/L, still a four-fold difference. Since this calculation is based on the maximum concentration soon after a single dose, it overestimates the true steady-state concentration likely to be achieved.

These values and calculations are consistent with what others have reported in more detail, based on a systematic review of the literature and a population pharmacokinetic study, from which lung concentrations have been estimated at around 80 nanomol/L.

Furthermore, since ivermectin is highly protein bound (about 93%) the total plasma concentration greatly overestimates the amount of drug that is available for entry into host cells, where it is supposed to act. Given the apparent volume of distribution of 3.5 L/kg and an unbound plasma fraction of 0.07, one can calculate the unbound fraction in the tissues to be about 0.1 (10%). Thus, in the tissues only 8 nanomol/L is available for action on the virus.

On pharmacokinetic grounds alone, ivermectin is unlikely to be beneficial.