The retraction yesterday of two publications, one in The Lancet and one in the New England Journal of Medicine, reflects a current major problem with research into the management of covid-19—that we have abandoned the tenets of evidence based medicine.

In my recent litany on the subject I mentioned the following problems:

To all of these I might have added the rush to publish in peer reviewed journals and publication accompanied by striking press releases. Here’s an example from my own experience. A few weeks ago a learned journal asked me to review a paper. Two days later, on a Saturday afternoon, the editor sent me an email: “We recently invited you to review the above-referenced manuscript. In the meantime, we have received a sufficient number of reviews to complete the review process, and unfortunately, we must proceed without your valued input in order to ensure a fast manuscript review process.” The authors had explained why the medicine they were discussing might be effective, despite the fact that they had also asserted, from mechanistic reasoning, that it should not. I had thought to suggest that they might change their emphasis, and instead discuss why the drug should be used at all, given that they believed that it was unlikely to be effective. I turned my attention to other matters.

The word retraction comes from the Latin verb trahere (past participle tractus), to drag, pull, or draw or carry along in several senses, and by extension to convey an idea mentally. The addition of the usual suffixes gives us a swathe of English words. The abstract of a paper may attract you to read it, or at least an extract, rather than the more protracted version; it may prompt a train of thought that will distract you for a while, but when it is retracted, you may realize that it is not the treat you thought it was, and the event may detract from your propensity to believe anything published thereafter in the journal that published it.

The story of the recent retractions is salutary. The Lancet issued a press release announcing the forthcoming publication, on 22 May, of a retrospective analysis of data from over 96 000 patients in 671 hospitals worldwide. Mortality was reportedly increased in those who had received a 4-aminoquinolone (chloroquine or hydroxychloroquine), and more so in those who had also received a macrolide antibiotic (azithromycin or clarithromycin). The results were believable, since both types of drug can prolong the electrocardiographic QT interval, with a risk of the polymorphous ventricular tachycardia called torsades de pointes (Figure 1), and the combinations are better avoided. However, it was not long before doubts began to be raised about the provenance and accuracy of the data, and the authors have since announced that since they cannot vouch for the data they have retracted the paper. 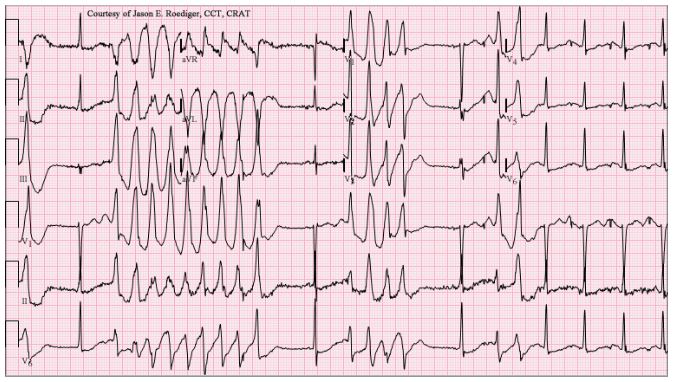