One topic leads to another. Before describing the little finger, digitus minimus, I found that I needed to discuss minimalism. Both led me to lupus minimus, which now brings me to lupus.

The IndoEuropean root ULKUO, sometimes written WLKWO, referred to a flesh-eating animal, and specifically a wolf. The words for a wolf in many Slavonic languages come from this root, including Bosnian vuk, Czech vlk, Latvian vilks, Lithuanian, vilkas, Polish Wilk, Slovenian volk, and Russian ьолк. Our own word, wolf, does too, via Teutonic languages, such as the Gothic “wulfs”. A vlkodlak (literally wolf hair or skin) was a Slavonic werewolf, supposedly responsible for eclipses of the sun and moon. In 1839 Aleksey Konstantinovich Tolstoy, a cousin of Leo Tolstoy, wrote a French novella called La Famille du Vourdalak, later translated into Russian. In 1963 Mario Bava turned it into a movie, I Wurdulak, part of a triptych I tre volti della paura (or Black Sabbath), starring Boris Karloff.

In many cultures totemic words become taboo. The Hebrew name of God, for example, cannot be spoken, and other words are used instead, such as Adonai (“my Lord”) or Hashem (“the name”). Because many tribes regarded the wolf as totemic, the wolf name also became taboo. So WLKWO underwent minor transformations to form the Greek and Latin variants.

The Greek word for a wolf was λύκος, from which we get lycanthropy, the condition of being a werewolf (Latin vir, a man). A range of plants and animals have names beginning with lyco-, such as lycodont, a snake with dog-like teeth; lycoperdon, a puff-ball, Lycoperdon bovista; Lycopodium (“wolf’s foot”), a genus of plants including club-moss, and Lycopus (ditto), a genus including water horehound and bugleweed. Lycopene, also called lycopin or lycopersicin (Greek περσικός, a peach), is a red carotenoid pigment found in tomatoes and other red fruits and berries. Lycomarasmin (Greek μαρασμός, wasting) is a dipeptide, glycylaspartate, a mycotoxin found in a fungus, Fusarium bulbigenum, which causes tomato wilt. Lycoctonine is a diterpenoid found in wolf’s-bane, Aconitum lycoctonum (Greek λυκοκτόνον, wolf-killer), which has been used to synthesize taxanes.

The female form of λύκος, λύκαινα, she-wolf, gives us the beautiful butterflies known as lycaenids, such as the light blue shown in the picture. 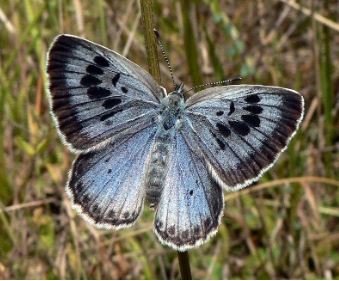 Λύκειος, wolf-like, was a nickname of the god of healing, Apollo. A garden with covered walks adjacent to his temple in Athens, where Aristotle taught philosophy, became known as the Lyceum, from which the French word lycée is derived. In England, lyceums were literary institutions established in the early part of the 19th century. The Royal Lyceum Theatre in Edinburgh and the Lyceum theatre in London’s West End are modern equivalents.

Dogs are domesticated wolves. A lytta is a worm-like structure in a dog’s tongue, supposed to be a parasite conferring susceptibility to rabies. Rabies was also called lyssa (Greek λύσσα, madness). Homer used the word to describe battle rage, but later authors used it to refer to other forms of madness, such as Bacchic frenzy, the frenzy of the Furies, and even passionate love, before applying it to rabies in dogs. Alyssum was a name given to any of a number of plants reputed to cure madness and particularly to heal the bite of a rabid dog.

The Latin word for the totemic wolf, like the Greek λύκος, was lupus. Stories about abandoned children being raised by wolves are found in many mythologies. Romulus (the future founder of Rome) and his twin brother Remus (picture) were found by a she-wolf in the Lupercal cave at the foot of the Palatine Hill. 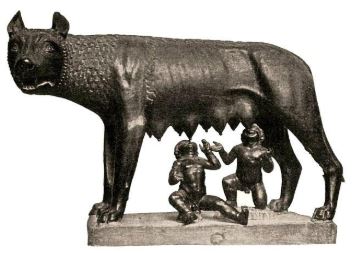 An Etruscan wolf (5th century BC), to which Antonio Pollaiuolo added the figures of Romulus and Remus in the 15th century AD

The name of the Musée de Louvre, originally a palace, the Palais du Louvre, comes from its association with wolf hunting.

In English “lupus” originally meant a wound, first recorded in a late 14th or early 15th century edition of Lanfranc’s Cirurgia. The French dermatologist Pierre Louis Alphée Casenave (1795-1877) coined the term lupus érythémateux in the Gazette des Hôpitaux in 1850 to describe the skin lesions of the disease we now called systemic lupus erythematosus. Lupus exedens was first described in the Medical Times and Gazette in 1852, lupus vorax in the Lancet in 1857, and lupus vulgaris in the Boston Medical and Surgical Journal in 1860. These and other medical wolves are listed in Table 1. 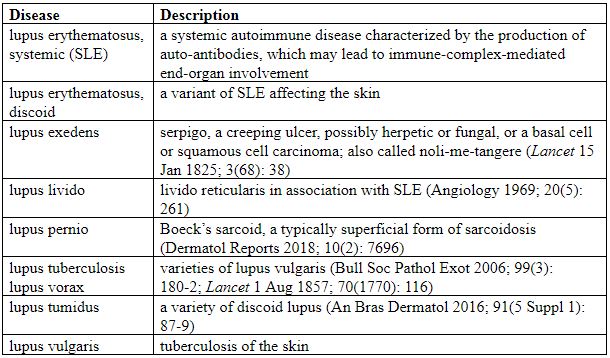