Having previously discussed the thumb and the index finger, I turn to the middle finger.

The Greeks called the middle finger ὁ μέσος δάκτυλος and likewise the Romans called it digitus medius. I have previously discussed the etymology of the words dactyl and digit, from the IndoEuropean root DEIK; μέσος and medius come from the IndoEuropean root MEDHYO, middle, with English derivatives that include mid, midst, amid, midway, middleman, middle-brow, middle-class, midnight, midsummer, and midshipman; mean, median, and mode; medium and media, medial, mediate, and intermediate; medieval, mediocre, mediterranean, and meridian. The mediastinum is in the middle of the chest.

The Greek word μέσος, middle, gives us about 400 words prefixed with meso- or mes-, including mesencephalon, mesenchyme, mesentery, mesolimbic, and mesothelioma. Such words are typically intermediate, mesolithic between palaeolithic and neolithic, mesocephalic between dolichocephalic and brachicephalic. A meson (originally mesotron) is a subatomic particle, with a mass between those of an electron and a proton.

A medalia was a Roman coin worth half a denarius, a coin of little worth. In the 15th century it was upgraded in French to medaille, a gold coin. Then in the 16th century it came to mean a commemorative coin or one bearing a devotional image, and hence a medal.

Mezzo in Italian gives us mezzanine, mezzotint, intermezzo, and mizzen, the middle mast.

A mullion is an upright that divides a window in two. It comes, by metathesis, from the Latin word monialis, via the French word meneau, from mene middle.

The French, and now also English, word “milieu” comes from the Latin medius locus, the middle place, which is how Descartes described the physical environment. The French physiologist Claude Bernard (1813–78) coined the phrase milieu intérieur, referring to the physiological mechanisms that maintain phenomena such as temperature and hormone concentrations in equilibrium. Later, in 1926, the American physiologist Walter B Cannon (1871–1945) coined the term “homeostasis” to describe such equilibria. The idea implies keeping variables in the middle of a tightly controlled range. 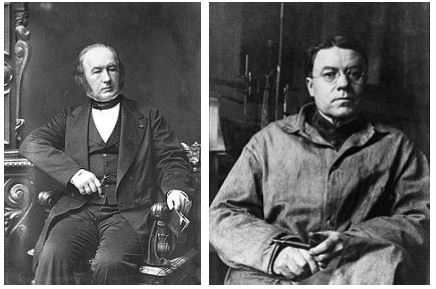 The nine realms in Norse mythology were called Niflheim, Muspelheim, Jötunheim, Vanaheim, Alfheim, Svartalfheim, Helheim, Asgard, and Midgard. Midgard, where mortals lived, was somewhere between Asgard, the home of the aesir, the gods, and Utgard, a stronghold in Jötunheim, the home of the giants. Gard meant a type of enclosure, like a yard.

In Latin the middle finger was also called digitus summus, the tallest finger; the arm span is measured from one tip to the other. It was also called digitus infamis, the disgraceful finger, used to avert the evil eye, or digitus impudicus, the shameless or vulgar finger. because it was widely used, as today, in insulting or vulgar gestures. The Roman phrase “medium ostendere unguem” (“to show the middle nail”) meant to scorn, as Erasmus told us in his Adagia. The emperor Caligula would proffer his middle finger to be kissed, to embarrass the recipient of the gesture. Other emperors behaved just as badly: in the unreliable Life of Antoninus Heliogabalus, “Aelius Lampridius” wrote that the emperor “never refrained from lewd conversation and would make indecent signs with his fingers”.

“Minge”, also spelt “mintch”, a loan-word from Romany, was coyly defined by George Borrow in Romano Lavo-Lil: Word-Book of the Romany or, English Gypsy Language (1874) as “pudendum muliebre”. It may come from its middling position in the body, although the OED declares this to be unlikely, offering as possible alternatives the Latin word mingere, to urinate, and a similar Sanskrit word, and anyway declaring the etymology uncertain.

The shape of the “pudendum muliebre” can be mimicked by extending both middle fingers, bringing them together at the tips, with the other fingers folded in and also touching, forming a triangle. This South American gesture implies that a couple have had sex.