In my hundredth contribution under the “When I Use a Word” heading, I discussed powers of ten and official and unofficial SI (Système Internationale) prefixes used to denote thousand-fold divisions in measured quantities, from deci- to yotta- and from xenno- to dekta-.

Of course, the reason we count in tens is because we have ten digits on our hands and ten on our toes. That makes digits a suitable subject for this, my 200th contribution.

The IndoEuropean root DEIK meant to show, and since showing something or pointing to it is a way of defining it, ostensive definition, it also meant to utter. In Greek δεικνύναι meant to show. In logic, a deictic proof is one that demonstrates something directly, as opposed to an elenctic proof, which does so indirectly. Deixis is a linguistic function in which a term refers to position or location (e.g. here, there, everywhere) or to person (e.g. the personal pronouns). An apodictic statement is one established by incontrovertible evidence, an absolute truth. A paradigm (Greek παράδειγμα, a pattern) is an example, a typical instance.

The corresponding Latin word is dicere, to tell, giving us dictate, diction, dictum, and many words ending in “dict”, “diction”, or “dictive”, including addict, verdict, contradict, edict, indict, interdict, and predict, jurisdiction, malediction, valediction, and vindictive. Herb bennet, from the Latin herba benedicta, a blessed plant, was a name variously given by early herbalists to plants such as Geum urbanum, Conium maculatum (hemlock), and wild valerian.

Dicare in Latin had a slightly stronger meaning, to proclaim, giving us abdicate, dedicate, predicate, predicament, and preach. To indicate is to show something, especially if you use the index finger. A dictionary is a book that points out meanings. In the first chapter of Vanity Fair (1847), Thackeray describes how Miss Jemima Pinkerton gives Becky Sharp a copy of Dr Johnson’s 1755 Dictionary, and how Becky, in a “heroical act”, throws it out of the window of her coach as she leaves Miss Pinkerton’s academy for young ladies.

In Latin iudex was a judge, one who points to the law (ius), giving us judge, judgement, judiciary, and prejudice. This takes us back to the Greek δίκη, justice, and δικάζειν to judge, from which we get dicast, an ancient Greek judge or juryman, syndicate, originally a council of magistrates, and theodicy, vindication of God’s attributes.

Via the Old English word tǽcean, to show, DEIK also gives us a token (tácen) and to teach.

In Greek δάκτυλος and in classical Latin digitus meant a finger. In prosody, the dactyl has three syllables, long, short, short, like a finger. The long fingers of arachnodactyly fancifully resemble the legs of a spider; polydactyly is not just many but too many fingers. The Greeks and Romans practised finger counting, and digitus later came to mean any number less than ten. Hence “digit”, a finger or a number. Foxgloves were called Digitalis by the Tubingen physician and herbalist Leonhardt Fuchs (1501–66), after whom the fuchsia is named, in his 1542 treatise De historia stirpium (Figure 1). He compared the flowers of the plant to a thimble (in German Fingerhut, literally a finger-hood), from postclassical Latin digitale, a fingerstall or thimble. Foxgloves have also been called thimbleweeds. Other languages have similar words for foxgloves; for example dedalera (Spanish), sormustinkukka (Finnish), gyűszűrvirág (Hungarian), and naprstnik (Czech), all from words meaning a thimble. 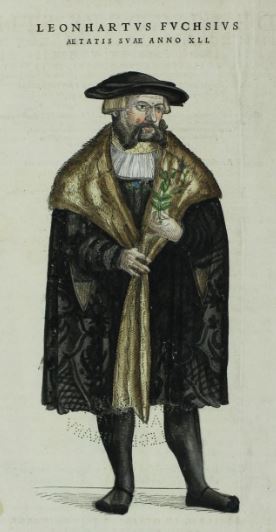 Figure 1. Leonhardt Fuchs, as depicted in the frontispiece to his De historia stirpium (1542), in the penultimate chapter of which he wrote (De Digitali, cap. CCCXLII), “Appelavimus autem digitalem, alludentes ad germanicam nomenclaturam fingerhut, sic enim Germani hanc stirpem nominant, a florum similitudine” (“We have called it Digitalis, in allusion to the German name “thimble”, so-called by the Germans because the flowers resemble one”)

We have a decimal counting system because we have ten digits on our hands. Using both fingers and toes to count leads to a vigesimal system, which we can see in the word “score”, meaning twenty; “threescore” used to mean 60, and “fourscore” 80, just as “quatre-vingt” in French still does. The Babylonian sexagesimal system was independent of this type of counting, and its influence can be seen in the way we measure time, with 60 seconds in a minute and 60 minutes in an hour, and in geometry, with 60 minutes in a degree of arc. 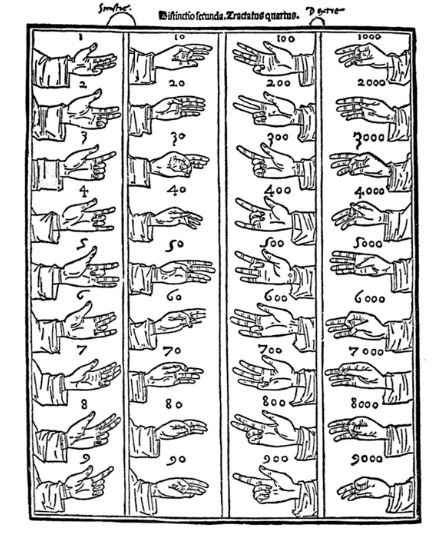 Figure 2. An illustration of finger counting from De temporum ratione by the Venerable Bede: “We have considered it necessary (with God’s help) to write about the measurement of time, and first of all to explain briefly the useful and convenient skill of bending the fingers …When therefore you say One, by bending the smallest finger in the left hand, you place the joint in the middle of the palm …”

So today, from time to time, I shall curl the fourth and fifth digits of my right hand, as shown in Figure 2, to remind myself of 200 contributions. I only hope that nobody misunderstands the meaning of the way in which the second and third digits are configured.