It’s appropriate that this blog, my hundredth under the “When I Use a Word” heading, a hundred being ten times ten, should appear in December, which, until the addition of January and February, was counted as the tenth month in the solar calendar.

From the IndoEuropean root DEKM, ten, came the Greek word δέκᾰ, the Latin decem, and many English words beginning with dec-, such as decade, decagon, decalogue, decanal (a ten-carbon aldehyde), decapeptide, decathlon, December, decennial, and the SI unit prefixes deca- (as in decagram and decametre) and deci- (as in decibel and decilitre). To decimate (Latin decimare) was to punish every tenth man of those found guilty of a crime, chosen by lot; it now means to destroy utterly. Greek words for 11–19 ended in -δέκα, giving us words in which -deca- is an infix, such as dodecahedron, enneadecaeteris, the period of 19 years that forms the basis of the Metonic cycle, and triskaidekaphobia, fearing the number 13.

In classical Latin a decuria was a group of ten men or ten families forming a unit of government. Decurio was an officer in charge of ten cavalrymen or a member of a municipal council composed of ten divisions of ten men each; the Greek equivalent was δεκᾶνός, which in late and mediaeval Latin became decanus, a chief or commander of a division of ten.

“Decanus” was used to describe various types of headmen in the Latin text of the Laws of Edward the Confessor (12th century) and was translated as “dean” in Nathaniel Bacon’s Historical Discourse of the Uniformity of the Government of England (1647). At about the same time it came to be applied to the head of a group of ten monks in a monastery, having earlier been used, in the 14th century, to describe the head of the chapter or body of canons of a collegiate or cathedral church, and other types of churchmen, such as rural deans.

Most of the colleges of Oxford and Cambridge were originally religious houses, and in the 16th century “dean” came to be used as the title of a college fellow appointed to supervise the conduct and studies of the junior members, to maintain discipline among them, and to present them for graduation; the title persists today and is also used to describe heads of some colleges, such as the Dean of Christ Church.

The use of “dean” as the title of the head of a school of medicine attached to a hospital did not emerge until the mid 19th century; its first appearance, cited in the Oxford English Dictionary, was in the minutes of a committee at St. Thomas’s Hospital [sic] on 23 May 1849: “It was agreed . . . that some one member of the Medical School shall for each year act in the capacity and with the title of ‘Dean of the Medical School’.”

The French word “doyen”, a leader or commander of ten, entered English in the 15th century, and in the 17th gained its modern meaning, the senior and most respected member of a group. The female version, doyenne, emerged at the start of the 20th century.

The d in £sd, an old penny, stands for denarius, originally a Roman coin worth ten asses; dinars are corresponding oriental coins. A dime was originally a tenth part, a tithe paid to the church or a temporal ruler. Shakespeare used it in Troilus and Cressida (2:ii) to mean a tithe of war, a sacrifice of every tenth man. On 8 August 1786 the US Congress decreed that American coins should be called “Mills, Cents, Dimes, Dollars”.

The Système International d’Unités includes prefixes for the various powers of ten that can be used to modify its units of measurements. They come from Greek, Latin, Spanish, and Scandinavian languages (Table 1). The earlier prefixes have no pattern, but the Bureau International des Poids et Mésures then introduced consistency, deriving the prefixes for powers of 10–21 and 10–24 and of 1015 and above from consecutive Greek number words. 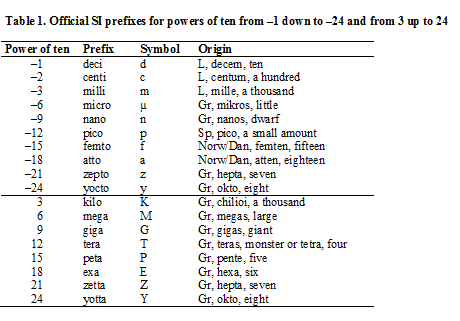 I have coined prefixes for higher powers (Table 2), choosing initial letters not already represented and continuing the backward alphabetical progression started by zepto/zetta and yocto/yotta.

I first suggested this system in 1994 and it has been listed as unofficial in Motion Mountain, Cristoph Schiller’s online physics textbook. Others have regarded it as both a hoax and at the same time “an almost acceptable kind of proposal”. It was not a hoax nor successful (the proposed prefixes have not been officially adopted), but perhaps we need a word for a hoax that is. Based on two Greek words, εὐτύχία, success, and δόλος, a cunning contrivance intended to deceive, I suggest eutuchidole, which appropriately sounds a bit like “you took it all”.

Acknowledgement: Thanks to Cristoph Schiller for reminding me about this and for his excellent free online physics textbook, Motion Mountain.