Last week I discussed how the Pharmacopoeia Londinensis of 1618 described the use of human skull for treating convulsions. This week I describe an even more unusual method of treatment, “Cornu Unicorni (horn of unicorn)”, as it is described in the May 1618 version.

Unicorns were described in ancient texts, notably that called Indica by Ctesias of Cnidus in 398 BC, in which he described certain wild asses in India, with white bodies, dark red heads, dark blue eyes, and a horn on the forehead about 18 inches long. At its base the horn was white, in the middle black, and at the top crimson, with a sharp tip. Anyone, wrote Ctesias, who drank from one of these horns would not be affected by convulsions and would be protected against poisons. Other features of this creature were that it had a gall bladder, unlike other Equidae, and an astragalus in the ankle. It could run exceptionally fast. And if surrounded it would fight valiantly with its horn, teeth, and heels to defend its young.

No Indian animal fits the description given by Ctesias, but there is one animal that does—the Tibetan antelope or chiru. The conclusion that the chiru is the original of the unicorn is justified at length by Chris Lavers (in The Natural History of Unicorns, Granta, 2009), vitiated by one not entirely unimportant detail (Figure 1). 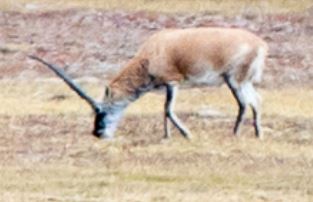 Figure 1. A Tibetan antelope or chiru, a candidate for the supposedly mythical unicorn; I am reluctant to admit, but do so in the spirit of accuracy, that the chiru is seen here in profile, making it appear to have only one horn; in fact it has two; as T H Huxley wrote, the great tragedy of science is the slaying of a beautiful hypothesis by an ugly fact

The unicorn is also mentioned seven times in the King James authorized version of the Bible, which was published in 1611. We learn, for example, that God has the strength of a unicorn (Numbers 23:22) and that his horns are like the horns of unicorns (Deuteronomy 33:17). The Psalmist says that God makes Sirion skip like a young unicorn (Psalms 24:6) and will make David’s horn exalt like the unicorn’s (Psalms 92:10). And the prophet Isaiah proclaims that God will send unicorns down upon His enemies.

Now the Hebrew word that is translated as “unicorn” in the Authorized Version was rə′em (Box 1), whose real meaning is unknown. However, it has been suggested to have been cognate with the Arabic “rim” and the ancient Mesopotamian “rimu”, names for the Arabian oryx. However, in the Septuagint, the earliest extant Greek translation of the Hebrew bible, rə′em was translated as μονόκερως (monceros) and then in Latin versions as “unicornus”. Hence, “unicorn” in the King James version. What a monoceros was is another mystery, but the word is now used in the Latin name of the narwhal, a small Arctic whale, Monodon Monoceros, with a straight spirally twisted tusk, also called the sea-unicorn. The horn of a unicorn has also been called an alicorn, and in the early 17th century narwhal tusks, masquerading as unicorn horns or alicorns, were widely traded.

Box 1. The Hebrew word rə′em
The Hebrew word translated as “unicorn” in the Kings James Bible (the Authorized Version) was רְאֵם, which transliterates as rə′em. Recall that Hebrew is written from right to left, and that the symbols representing vowel sounds are written beneath the consonants that they follow in sound. So the first letter of the word, on the right, is a resh (r) and the double-dotted vowel underneath it is a schwa, a neutral vowel sound, represented in phonetics by an inverted e (ə), to denote sounds that typically occur in weakly stressed syllables, as in “məˈnɒsərəs” (monoceros). The middle symbol is an aleph, which is sounded as a glottal stop, represented here by an apostrophe. The last consonant is a mem (m), preceded by the double-dotted vowel under the aleph, sounded somewhere between a short and a long e. The picture below shows how the five symbols in the Hebrew word are transliterated into English, symbol by symbol (read both versions from right to left):

So, how could the Fellows of the College of Physicians fail to believe in unicorns when their existence was confirmed in the most recent translation of the Bible, authorized by the King and published only a few years before the Pharmacopoeia Londinensis?

In the December 1618 version of the Pharmacopoeia the entry “Cornu Unicorni” was extended to read “Cornu Unicorni, Monoceros, Rhinocerotis Capre (horn of unicorn, monoceros, rhinoceros—permitted substitutes).” Real unicorn horn was doubtless hard to come by, and alicorns were expensive. So the horns of other one-horned creatures were considered to be acceptable. Indeed, it didn’t matter whether the horn that was actually used came from a one-horned or a two-horned animal. Once the horn had been detached, it could be sold with the assertion that it had come from a unicorn.

We should not criticise the early 17th century physicians. Their understanding of physiology was poor and of pharmacology non-existent. The Bible said that unicorns existed, and the legends said that their horns were effective against epilepsy. Galenic humoral theory, clearly expounded in all its complexity by Nicholas Culpeper in his English version of the Pharmacopoeia Londinensis, held sway, and would do so until the middle of the 19th century.

Today the term “unicorn” is used to describe a startup company valued at over $1 billion, something like the cost of developing a new drug. Perhaps a new unicorn can be encouraged to investigate unicorn horn.There have been, to my knowledge, no randomized controlled trials of the use of unicorn’s horn in the management of epilepsy. Until such evidence is available, we can go on, in the company of the physicians of 1618, believing in its efficacy.