Before 2018 ends, I want to celebrate again the grandfather of UK pharmacopoeias, the Pharmacopoeia Londinensis, whose first edition was published in 1618 in two separate versions (Box 1). Its contents give some surprising insights into medical practice at that time.

Among the many remedies listed in the Pharmacopoeia—the roots, barks, woods, leaves, flowers, fruits and buds, seeds or grains, tears, juices, plant extracts, things from the sea, salts, and metals—one section stands out, that devoted to “Animal parts, excreta, and tissues”, where we learn about unusual applications of strange medicaments: the shells of certain mussels; the abdomen and tail of lizards; the lungs of fox, lamb, hog, and bear; grease of duck, goose, and bear; fat of hog, viper, calf, and boar; suet of buck, goat, stag, ox, sheep, cow, and badger; marrow of ox, sheep, lamb, stag, dog, goat, cow’s shin bones, bull, and calf; bile of bull, cow, hawk, kite, goat, hog, and hare. Disappointingly, eye of newt and toe of frog did not feature, even though Shakespeare’s Macbeth was first performed in around 1606.

Box 1. The two versions of the first edition of the Pharmacopoeia Londinensis
The Pharmacopoeia Londinensis was first published by the College of Physicians on 7 May 1618. However, the physicians then claimed that the first edition had been botched at the printers’ shop. They withdrew it, and on 7 December 1618 issued a greatly expanded revised version, which included, for example, 1190 simples, compared with only 680 in the earlier version. A simple was originally a medicine compounded from a single ingredient, especially a single herb or plant, and hence a plant or herb used medicinally; the term is now obsolete. The physicians claimed in an epilogue that the printer of the earlier version had “snatched away from our hands this little work not yet finished off,  …defiled with so many faults and errors, incomplete and mutilated because of lost and cut off members”. Which is supposedly why the Pharmacopoeia Londinensis had two first editions. Whether this was the true reason is unclear.
Clare Fowler has suggested that one of the Fellows of the College, Sir Théodore Turquet de Mayerne, prematurely submitted his own version to the printer, to the dissatisfaction of the other Fellows, who replaced it with the later version. Alternatively, the physicians may not have liked the title page in the first version, which, based on a standard format, shows some of the royal symbols, such as the lion and the unicorn, but not the King’s or the College’s coat of arms. The King himself, James I, may have been displeased with the first version—he had issued a proclamation that “all Apothecaries of this Realme [should] follow this Pharmacopoeia … upon paine of our high displeasure”, but the proclamation was inadvertently omitted from the early impressions of the May edition. Another reason for blaming the printer, Edward Griffin.

Human skull as an anticonvulsant

Man as an animal whose parts might form the source of medicaments is not neglected in the Pharmacopoeia. In the December 1618 version we read of the use of “Cranium Humanum, In Eo Os Triquetrum”. The os triquetrum, or triangular bone (Latin triquetrus, three-cornered), is in this case one of what are now called Wormian bones, named after the Danish physician Olaus Worm (1588–1654), found in the sagittal suture; it is not to be confused with the triquetrum, a triangular bone in the wrist. Pliny the elder (23–79 AD) mentioned the therapeutic use of human skull in his 10 volume encyclopaedia, Naturalis Historia, which contains 37 books on astronomy, mathematics, geography, ethnography, anthropology, human physiology, pharmacology, zoology, botany, agriculture, horticulture, mining, sculpture, painting, mineralogy, and precious stones, published posthumously: “For epilepsy, Artemon has prescribed water drawn from a spring in the night, and drunk from the skull of a man who has been slain, and whose body remains unburnt” (Book XXVIII, Chapter 2). After that many other physicians used human skull to treat epilepsy, even as late as the 18th century.

Take a late 17th century example. Powdered skull in water was among the many herbs and other remedies that his physicians ventured to use when Charles II fell ill with convulsions on 2 February 1685; after that he had no more convulsions, whether because of or in spite of the treatment is unclear. The method had been described by Nicholas Culpeper in his 1653 English version of the Pharmacopoeia Londinensis (Figure 1). 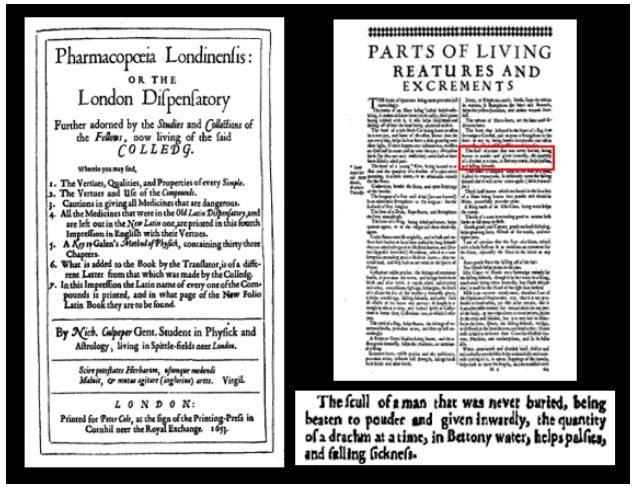 Figure 1. Nicholas Culpeper’s English edition (1653) of the Pharmacopoeia Londinensis, showing the title page (left) and the first page of the section on Parts of Living Creatures and Excrements (top right), where we read of the efficacy of human skull in treating the falling sickness, i.e. epilepsy (bottom right)

Hoping no doubt to purge him of naughty humours, Charles’s physicians dehydrated him by bleeding, cupping, scarifying, blistering, and clystering him, and they gave him a range of herbs, some innocuous, some potentially harmful, including dehydrating emetics and purgatives, as well as the powdered skull. On Friday 6 February the King apologised to them for having been “an unconscionable time dying”; they might equally have apologised to him for their ministrations and for having hastened his death, which was probably in any case unpreventable. Renal insufficiency secondary to gout and dehydration was a plausible cause.

If extract of human skull were being developed today, it would be necessary first to identify the active ingredient, to test it preclinically, and then to perform the necessary pivotal studies of benefits and preferably also harms, before submitting it for approval to regulatory authorities, such as the UK Medicines and Healthcare products Regulatory Agency (MHRA), the European Medicines Agency (EMA), and the US Food and Drug Administration (FDA). This process would preferably also include studies of the mechanism of action.

A mechanism whereby human skull is efficacious in neurological disorders was proposed by Jan Baptist van Helmont (1580–1644) in A Ternary of Paradoxes: The Magnetick Cure of Wounds. Nativity of Tartar in Wine. Image of God in Man, as translated by Walter Charleton in 1650: “all the brain is consumed and dissolved in the scull, by the continual irroration and imbibing of which precious liquor (I mean that of the brain) the scull acquires such virtues, which we have discovered to be wanting to the other bones.” Those interested in new ways of treating epilepsy, dementia, and other neurological disorders might perhaps take note.