As I have been discussing in the last few weeks, the Medicines Act 1968, whose 50th anniversary we have been celebrating, had major effects on, among many other things, the licensing of medicines and how they are advertised and described.

However, time passes and circumstances change. Consequently, new or amended laws are required. The Medicines Act 1968 has therefore been superseded by the Human Medicines Regulations 2012.

The IndoEuropean root REG meant to move or direct in a straight line, and therefore to lead or rule. This root has numerous ramifications. To start with, they include all kinds of ruling words, such as reign, regnal, regal, and regent, regime, regimen, and regiment, and regulation.

Take the triplet regime, regimen, and regiment, a closely linked group. A regime is a manner or system of rule or government, these days often used disparagingly. A regimen is a course of diet, exercise, or other form of behaviour designed to improve your health, and it can also refer to drug therapy. Clinical pharmacologists prefer “regimen” to “regime” in referring to a course of treatment. It is certainly desirable to distinguish the two words, but historically things are not that simple. Regime and regimen originally meant the same thing, and neither referred to medical treatment. Since the Earl of Carlisle, in 1776, illustrated the distinction, writing that “regime is better than physic”, the meanings of the two words have diverged, although without departing too far from each other. They are still used, for example, apparently interchangeably, by geographers to describe the condition of a watercourse. A regiment is not only a body of soldiers, but also a regime. So when John Knox wrote his pamphlet The First Blast of the Trumpet Against the Monstrous Regiment of Women (1558), he was thinking, not of a troop of marching harridans, but of government by women, which he may have thought a much more frightening prospect altogether (Figure 1). Regiment once also meant a regimen, as in the phrase “a regiment of health”. In fact, in some senses regiment meant regime and regimen before regime and regimen existed. So the three words all really mean the same thing. 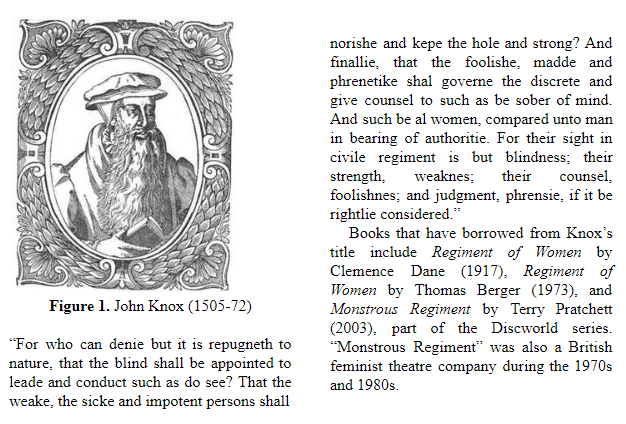 The ruling meaning of REG carried over into the Latin word “regula”, a rod used for drawing straight lines or measuring them, a ruler. It then developed the transferred meaning of a basic principle, a rule or standard of any sort, such as in conduct, language, or thought. In English a regulation is “A rule or principle governing behaviour or practice; especially such a directive established and maintained by an authority” (Oxford English Dictionary); as a non-count noun, regulation means the process of regulating, in any of its senses.

When a law is drafted it will, or should, be good for the time being. In order to allow the law to be amended in response to needs that cannot be anticipated when the original law is enacted, an original Act, whether drafted in broad or specific terms, may contain provisions that allow the enactment of so-called “Delegated Legislation” (Figure 2). Most such legislation consists of what are called statutory instruments, which include regulations, orders, measures, rules, and schemes. Statutory instruments can be recognized from having one of these words in their titles. 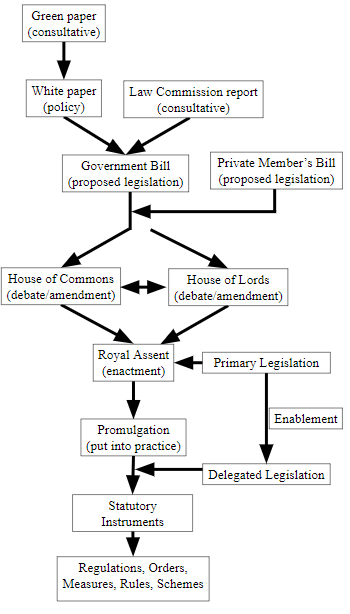 Figure 2. A simplified account of how laws are passed in the UK

The Medicines Act 1968, a piece of primary legislation, created by an Act of Parliament, having been approved by both Houses, Lords and Commons, is an enabling or parent Act, in that it makes provisions for further changes to be made under delegated legislation, without the need to promulgate a completely new Act. For example, the Act allows Ministers to make regulations regarding the sale or supply of medicinal products [§87(1)], as well as regulations in regard to contravention of such regulations [§91(12]. There is even provision [§129(1)] for Ministers to make regulations “for any purpose for which regulations are authorised or required to be made under this Act, other than any purpose for which any provision of this Act authorises or requires regulations to be made otherwise than by the Ministers.” Not surprisingly, the same or similar wording can be found in many other Acts, enabling delegated legislation.

In turn, the Act requires Ministers, except in cases of urgency, to consult “such organisations as appear to them to be representative of interests likely to be substantially affected by the regulations or order.” The wording might be thought to give them quite a lot of leeway.

Thus, the Human Medicines Regulations 2012 were enabled by the Medicines Act 1968.