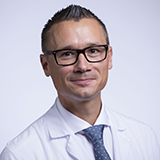 Given the demographic shift towards a more elderly population, lower urinary tract symptoms secondary to benign prostatic hyperplasia (BPH-LUTS) will become more and more prevalent. Surgical treatment is often performed if medical treatment fails. The indication to perform surgery may be based on patient reported symptoms, deterioration in micturition parameters, or both.

Although established surgical techniques, such as transurethral resection of the prostate (TURP), have matured over decades, they are still associated with considerable side effects. In clinical practice, we see many patients who have serious reservations about established surgical treatments, or are unfit for traditional surgical approaches.

Prostatic artery embolisation (PAE) in the treatment of BPH-LUTS seems to have some obvious advantages, including performance under local anaesthesia, a favourable side effect profile, and no need for postoperative physical rest. It is therefore not surprising that the main difficulty in conducting our randomised controlled trial comparing PAE and TURP in patients with refractory BPH-LUTS was not finding patients who were willing to undergo an intervention still considered experimental and not mentioned in any guidelines, but to convince them to participate in a randomised trial with a 50% chance of being assigned to TURP. This was especially challenging as in Switzerland, like in many countries, PAE is already offered outside clinical trials and is reimbursed by health insurance funds.

Our study, published in The BMJ, provides data that may help to clarify the inconsistent and low quality evidence currently available for PAE. The findings largely confirm the general assumption that PAE is a safe procedure that improves BPH-LUTS in most patients. In our study, this improvement in patient reported symptoms after PAE did not differ statistically significantly from that after TURP. In contrast, the reduction in prostatic volume and bladder outlet obstruction was clearly less pronounced after PAE than after TURP, which was reflected in inferior improvements in urinary flow rates and post-void residual urine volumes.

In our opinion, this suggests that careful patient selection is crucial for PAE and that the predominant indication for moving from conservative to surgical treatment (persistent symptoms v severe deterioration of micturition) has to be considered.

The discussion regarding the use of PAE to treat BPH-LUTS is still controversial and is influenced by political interests, since interventional radiologists are encroaching on what has so far been a fundamental domain of the urologist. Nevertheless, based on the evidence available, NICE recently recommended PAE as a treatment option for BPH symptoms.

It seems, therefore, that the question is no longer whether PAE has a role in the treatment of BPH-LUTS, but rather how long do the beneficial effects persist? What are the ideal patients and indications? When should classic surgery be preferred? Should PAE be seen as an alternative to medical rather than surgical treatment?

These questions can only be answered by large, robust trials. Interventional radiologists must therefore start to perform PAE within well designed study protocols, and urologists must abandon any objections to PAE in principle. Now is the time to find the most appropriate spectrum of indications for PAE.

Dominik Abt is a consultant urologist in the Department of Urology of St. Gallen Cantonal Hospital, Switzerland. He is specialised in urological surgery with a focus on minimally invasive treatments. Twitter: @AbtDominik

Conflicts of interest: None declared.