Most doctors in high income countries have never seen a case of cholera, but if they were to spend a day in the hospital of the icddr,b (formerly known as the International Centre for Diarrhoeal Research, Bangladesh), which is known to people in Dhaka as the Cholera or Diarrhoea Hospital, they might see 200 cases in that day. Cholera is endemic in Bangladesh, but twice a year—just before the monsoon in April/May and just after the monsoon in October/November—the hospital sees an increase in cases.

This year has been particularly bad, and the hospital has had up to a thousand patients present in a day, a fifth of them with cholera. A doctor from a high income country might find even more amazing than seeing 200 cases of cholera is the ability of a hospital with 250 beds to cope with a thousand cases presenting each day. 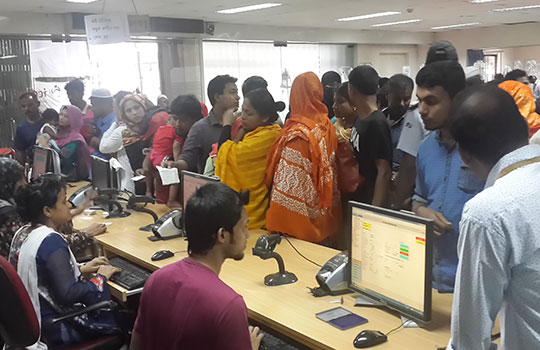 Untreated cholera with severe dehydration has a mortality of nearly 50%, but despite many of the Dhaka patients being severely dehydrated very few die—less than 1%. And of those patients that do die, almost all have other conditions—especially chronic diseases, such as diabetes and heart disease—or, sadly, are brought to the hospital dead on arrival. Few patients die because of the unmatched ability of the doctors and nurses to get drips into the severely dehydrated and the protocols established over years and based on research conducted by icddr,b.

The hospital does have an intensive care unit, although it doesn’t look like the intensive care unit familiar to doctors from high income countries. It has several ventilators for children, but these are now hardly used since the discovery at icddr,b that a very simple and cheap device comprised of oxygen, plastic tubing, and a plastic bottle, and called bubble CPAP, which increases the pressure in airways, can work as effectively as a ventilator. The research was published in the Lancet. And children with severe malnutrition are treated with a high energy food developed at icddr,b that uses local foods and is considerably cheaper than the global standard food.

Indeed, the centre is recognised as the world’s leading centre for managing cholera and diarrhoea, and when there is an outbreak, as in Yemen, Haiti, and several African countries, a team from icddr,b trains local health workers in the best way to manage the outbreak.

The hospital is unusual in Bangladesh in the large role in patient care played by nurses. In most South Asian countries doctors outnumber nurses, and nurses have low status. Usually, doctors regard nurses as the classic handmaidens, but in the Dhaka hospital they are respected as much as doctors. Unfortunately, the mutual respect does not seem to have spread to elsewhere in Bangladesh.

The hospital manages to cope with so many patients by treating some of the patients as outpatients, often with oral rehydration therapy, which was first developed at icddr,b, and by moving people out rapidly. It used to be necessary twice a year during the surges to erect one or more tents in the car park and fill it with cholera cots, which have a hole in the middle to collect for better management of rehydration therapy the profuse watery diarrhoea that characterises cholera. The tent is dark, and the first time I saw the tent filled with cots and patients I thought immediately of the pictures of the Crimea. But this is no dirty, unhygienic hospital but the opposite, although I was amused by the look of astonishment on the faces of the Australian cricketers shown round the hospital when the cricket World Cup was held in Bangladesh. For the past few years, changes in the way the hospital works, particularly the introduction of specific areas for treatment of outpatients, has meant that the tent has not had to be erected—but this year it had to be.

In addition, it was necessary to ask the nurses and doctors to work longer hours and on the days they would have been off. The hospital also called on researchers at icddr,b who were medically qualified; they abandoned their research and worked in the hospital. At times the hospital was so crowded that methods of crowd control had to be deployed. Cleaners too had to work longer hours, as it was essential to keep the hospital clean.

The performance of the hospital is constantly monitored, and the senior doctors were worried that the quality of care might be compromised by the heavy patient load. But there was no evidence of an increase in either deaths or patients returning.

Why was there the surge in patients presenting? The microbiology of the patients is regularly monitored, and the increase in cases was in infections with Vibrio cholerae, not rotavirus, Shigella, or other causes of diarrhoea. It may be that the strain of cholera is new, which will be evaluated with genomic sequence at  icddr,b. But why there was the sudden increase remains a mystery, although the fact that the increase was mostly in adults may provide a clue. The hospital in Matlab in a rural area, which is also run by icddr,b, did not see any increase in cases. Indeed, the two seasonal peaks are not well explained: they are not seen in Kolkota, which is only 250 miles away.

Doctors from high income countries, who are more familiar with cholera through novels and films than medical practice, must wonder about the risk of nurses and doctors catching the disease. But I have learnt that you need a substantial dose of the bacteria to catch cholera. In the 60 year history of the hospital only one health worker has developed cholera through working in the hospital.

People may also wonder why cholera continues. It’s a disease, as every medical student is taught, that is eradicated by clean water and good sanitation. Unfortunately, many people in Dhaka have neither. The city has a population of around 20 million, with a third of people living in slums, often with polluted water supplies and poor sanitation. Good protection can be given by an oral vaccine, and icddr,b is one of the world’s leading centres for research into the vaccine. Indeed, the staff of icddr,b have recently worked with the government of Bangladesh and others to vaccinate some 900 000 of the Rohingya people and so far have prevented a cholera outbreak, even though there is cholera among the Bangladeshis in Cox’s Bazaar close to where the Rohingya people are living. But vaccinating millions in Dhaka is a much more formidable task, although it may not be long before Bangladesh introduces routine vaccination in the areas of the country where cholera is endemic.

The hospital provides treatment for free, and unsurprisingly most of the people attending the hospital are poor. icddr,b is a health research institution, one of the largest in a low income country, and it has each year to find around US$5 million dollars to fund the hospital, where the average cost for a patient is only US$21. Although many patients are quickly discharged, some, as I’ve said, need treatment over many days in the hospital’s intensive care unit. icddr,b receives funding from many sources, including the government of Bangladesh, the UK, Sweden, Canada, the US, and the Gates Foundation, but the funding is mostly for research. Keeping the hospital treatment free is a continuing challenge, and if you would like to contribute something you can do so.

Competing interest: RS is the chair of the board of trustees of icddr,b. He is unpaid but has his expenses paid when travelling to Dhaka, although he has to pay for his own alcohol, which he finds he needs after each of the three days of the board meeting. He can take no credit whatsoever for the excellent response to the cholera epidemic.