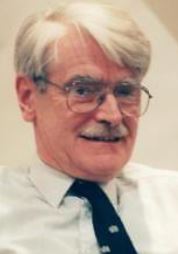 Sir John Grimley Evans, Grimley to all who knew him, died unexpectedly on 26 March 2018, and Oxford’s Green-Templeton College, previously Green College, of which he was an emeritus fellow, held a memorial service on 1 June. “Grimley” comes from an Old Norse name Grímr, meaning a masked or hooded person or a shape changer. It was a name by which the chief Norse god, Odin, was known, and children who were so named may have expected his protection. The ending –ley is from an Old English word, lēah, meaning a wood or clearing.

Grimley came to Oxford in 1985 to be professor of geriatric medicine from a similar chair in Newcastle. Knowing that his patients disliked the term “geriatric”, he later applied successfully to the university to have name of the subject changed to clinical geratology.

Grimley and T Franklin Williams co-edited the Oxford Textbook of Geriatric Medicine in 1992. Their joint preface referred to “medical geratology”, although Grimley’s title was still “professor of geriatric medicine”. Robert W Stout, a Belfast geriatrician, reviewed it in the Journal of the Royal College of Physicians of London, as it was then known (now, alas, pedestrianly titled Clinical Medicine). “Professor Grimley Evans would like to introduce the word ‘geratology’ to describe his [sic] specialty. The Shorter Oxford English dictionary defines geratology as ‘the science of the phenomena of decadence, especially in a species of animals approaching extinction’. Does he know something the rest of us do not know?”

Grimley replied in the next issue of the journal, in April 1993. Here is his letter in full:

“Professor Stout is concerned for the future of the human species now that the University of Oxford has designated our [sic] subject as clinical geratology. I am delighted to discover that Professor Stout has access to the Shorter Oxford English dictionary whence he has plucked the archaic implication of decadence and impending extinction that he quotes. I could wish that he also had a copy of Collins dictionary from which he would learn that nowadays geratology is ‘the branch of medicine concerned with ageing’.

“Dr Alex Comfort pointed out [in The Biology of Senescence, RKP 1956] that while ‘geriatrics’ is a serviceable term for medical practice among old people, ‘gerontology’ is a false coining for the science of ageing since it implies restriction to the study of old men (γέροντες). The more commodious concept of geratology is derived from γῆρας (old age) and is a proper interest for an academic department of a liberal university.

“The editors of the Oxford English dictionary assured me last year that they will modernise the definition of geratology for their next edition citing Dr Comfort in literary provenance. This will be a worthy tribute to an author whose various writings have done so much to inform the professional and enliven the private lives of geratologists.”

Here is what Comfort wrote on page 3 of his book, in a footnote to the word “gerontologist”: “I dislike this word, but it is probably too well grown for eradication. It should mean ‘a student of old men’ (γέρων) and gerontology the study of old men. For the study of age itself, the subject of this book, we require geratology (γῆρας), upon which it would be fruitless to insist.”

Comfort, better known as the author of The Joy of Sex (1972), did not coin “geratology”. Here is the Harvard Professor E[arnest] A Hooton in “An anthropologist looks at medicine” (Science 1936; 83(2151): 271-6): “I venture to suggest the need of a science, or at least a medical specialty, of geratology, or the study of old age changes and their relation to disease.”

Dictionaries (Table 1) typically define “geriatrics” as a medical specialty and “gerontology” as a science, but they either do not define “geratology” at all or define it inconsistently. In the online OED “geratology” is still defined as “The science of the phenomena of decadence, esp. those characteristic of a species or other group of animals approaching extinction”; and only one citation is given, from Alphaeus Hyatt’s paper “The Evolution of the Cephalopoda—II” (Science 1884; 3(53): 145-9). Old age medicine is not mentioned.

To be fair to the editors of the OED, “their next edition”, to which Grimley referred, is still in preparation, as Edmund Weiner recently pointed out to me; “geratology” will have its day.

Table 1. Definitions of geriatrics, gerontology, and geratology in different dictionaries 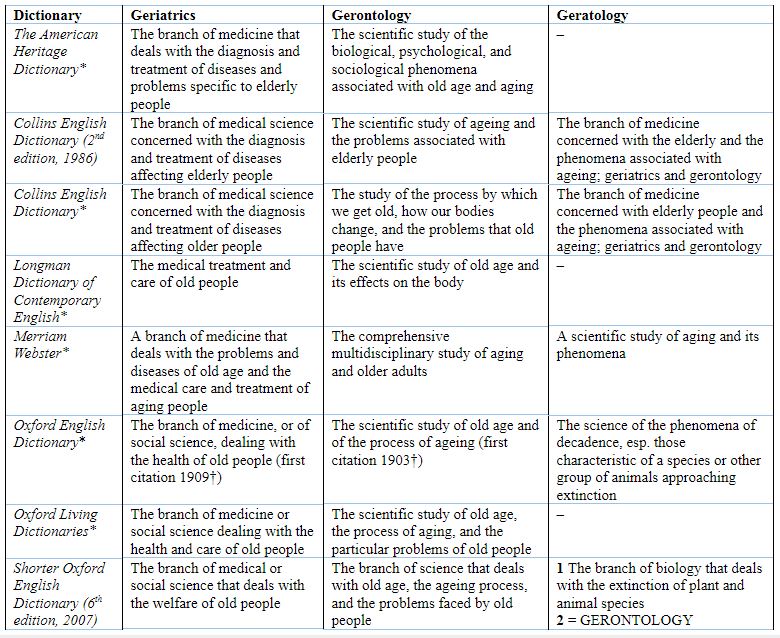 † The first edition of the OED includes “geratology” in its older sense but does not mention either “geriatrics” or “gerontology”; this is not surprising—the relevant fascicles, Gaincope–Germanizing and Germano–Glass-cloth, both edited by Henry Bradley, were finalized in 1898 and 1899, before they were first recorded; however, the words were not included in the 1933 Supplement and did not appear until Robert W Burchfield published A Supplement to the OED, Volume 1, A–G in 1972