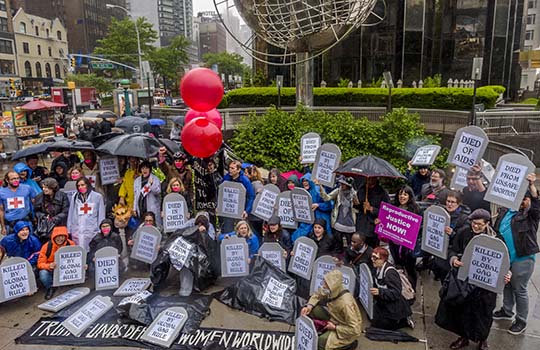 The Republican party in the United States has been solidly opposed to abortion for some decades now. Republican politicians in office reliably pursue policies designed to limit access to abortion, Republican politicians in and out of office reliably call for an end to legal abortion, and Republican voters reliably reward them for it. Many go beyond that to call for restrictions on all forms of family planning, and state governments have a long record of imposing them. In particular, they have what amounts to a vendetta, as a party, against Planned Parenthood. And in this, as so much else, Donald Trump is a conventional Republican. It should therefore be no surprise that the Trump administration, as part of the unified Republican government in Washington, is mounting a ferocious attack on abortion rights.

The Trump administration plans to revive a Reagan-era domestic gag rule on abortion counseling and provision. This gag rule would limit Title X funding, the only federal programme dedicated to providing low income and adolescent patients with access to family planning and preventive health services and information.

Under this rule, clinics or programmes that get federal family planning funds would be not be able to provide abortions, refer women to places that do, or even counsell women that abortion is an option. This mirrors the Global Gag Rule, or Mexico City Policy, already in effect, that prohibits foreign non-governmental organisations who receive any US foreign aid from discussing, referring, or providing abortions. It is well documented that when this law is in effect there are more unplanned pregnancies, more unsafe abortions, and more maternal deaths.

If this rule goes into effect, healthcare centres that provide or refer patients for abortions, such as Planned Parenthood, will lose funding that helps low income families access the primary healthcare they need. Title X funds currently go toward comprehensive healthcare services like contraception, cancer screening, and sexual transmitted disease treatment, and are accessed by over 4 million Americans a year. All that essential healthcare, gone.

A 2017 poll showed only 18% of Americans feel that abortion should be illegal in all or most instances, meaning the majority of Americans support a woman’s right to safe, legal abortion. The proposed rule imposes the conservative religious beliefs of a minority on the entire American population, directly contradicting the fundamental rights of freedom of speech and freedom of religion on which our nation was founded. The US is a plural and pluralistic society. Personal objections to contraception and abortion are allowed. It is not acceptable, however, to enforce those beliefs on an entire secular society. That amounts to religious discrimination.

Beyond the affronts to the constitutional protections of speech and religion, this rule also represents a gross interference in the patient-physician relationship. Dictating what doctors can and can’t say to their patients damages the integrity of that relationship. No government policy should stop healthcare providers from giving their patients comprehensive, medically accurate information.

Beyond the direct effect on reproductive health, Planned Parenthood and similar providers are important parts of the primary healthcare infrastructure of the US. If reduced federal funds lead to a serious reduction in access to their clinics, primary care as a whole is likely to suffer, especially in poorer and rural areas.

It is also unclear whether the policy is actually legal. The policy is an implementation of legislation that prescribes criteria for federal family planning expenditure. The legislation requires that the government support “a broad range of acceptable and effective family planning services.” A previous case challenging the Reagan-era guidelines, Rust v Sullivan, (500 US 173, decided May 23, 1991), upheld the federal government’s right to enact these same rules. As it happened, they were never implemented and were removed by the Clinton administration. Despite the Supreme Court endorsement of the right to pursue this policy, the policy change still needs justification other than politics, and it is not clear that this change is legal. Planned Parenthood has already filed a suit to block the policy in federal court, as have the National Family Planning and Reproductive Health Association and American Civil Liberties Union.

Such an outcome would not necessarily be bad for Republican politicians since it could be used to energise their voters in the November elections. There is a long history of right wing animus towards federal courts, particularly on the matter of reproductive freedom, and both Republican politicians and voters care about the composition of the federal courts. One of the things that might have tipped the 2016 election to Trump is the motivating effect on conservatives of the prospect of Hillary Clinton filling a Supreme Court seat that Senate Republicans had refused to fill under President Obama. As a result, a fight with federal judges about funding Planned Parenthood’s abortion counselling might seem like just the right issue for Republicans to have in the headlines this summer. If the policy is upheld in the courts, of course, then Republicans have an achievement to present to their voters.

Politicians already withhold federal funds from covering abortion. The result of this proposed rule, should it be allowed to go into effect, will be that people do not get the healthcare they need. They won’t get birth control, cancer screenings, sexually transmitted disease testing and treatment, or even general women’s health exams. Everyone, regardless of their race, income, or where they live, deserves the best medical care and information available. Under this rule, they won’t get it. This partisan policy is not based in medical fact or established law and will lead to poorer quality healthcare and less access to healthcare.

This is an attempt to take away women’s basic rights. Period.