Last week I discussed neologisms, including ones formed by adding to or corrupting existing words. The following list of other methods of neologising is not exhaustive.

Acronyms An acronym is a pronounceable word that is formed from the initials of the words in a phrase or sentence. For example, “laser” comes from Light Amplification by Stimulated Emission of Radiation and AIDS is from Acquired Immune Deficiency Syndrome. The EIDOS and DoTS methods of describing and classifying adverse drug reactions stand respectively for Extrinsic moiety, Intrinsic moiety, Distribution, Outcome, & Sequela, and for Dose-responsiveness, Time-course, & Susceptibility.

Portmanteau words This term, introduced by Lewis Carroll in Through the Looking Glass and What Alice Found There (1871), refers to words that telescope two or more different words. Examples include chocoholic (chocolate + alcoholic), someone who is addicted to or at least very fond of chocolate, Frankenfoods (Frankenstein + foods), genetically modified foodstuffs, and Nintendinitis (Nintendo + tendinitis), damage from excessive playing of video games.

Giving existing words new meanings “Signal”, which accrued many meanings following its first introduction into English in the 14th century was given a technical meaning when it was introduced into pharmacovigilance in the 1990s. It is currently defined as information that arises from one or multiple sources (including observations and experiments), which suggests a new potentially causal association or a new aspect of a known association, between an intervention and an event or set of related events, either adverse or beneficial, that is judged to be of sufficient likelihood to prompt verificatory action.

Adoption of nonsense words In 1964 the physicist Murray Gell-Mann took the word “quark” to name a type of subatomic particle from a meaningless line in a poem in Finnegans Wake by James Joyce (1939): “Three quarks for Muster Mark!” [“Mark” is King Mark of Cornwall from the legend of Tristan and Isolde and “quark” is a form of “quawk” the harsh call of a bird]. The word “googol” was coined by the nephew of the American mathematician Edward Kasner, who asked him to make up a word for the number 10100. A googolplex is 10googol.

Eponyms There is a long standing tradition of eponymous nomenclature of diseases, syndromes, signs or features of diseases, adverse drug reactions, scores and staging systems, laboratory tests, reactions, equipment, reagents, and procedures, anatomical and pathological structures, biochemical, physiological, and pharmacological phenomena, medications, surgical operations, equipment, and procedures, units of measurement, laws, rules, and microbes, among others. However, the habit peaked in the 1950s (Figure 1) and has declined ever since, giving way to terms that more exactly reflect the nature of the things being named. Nevertheless, for complex diseases or syndromes an eponym can still be useful. Examples of adverse drug reactions that have been named in this way include the Hoigné syndrome, the Jarisch–Herxheimer reaction, and Reye’s syndrome. 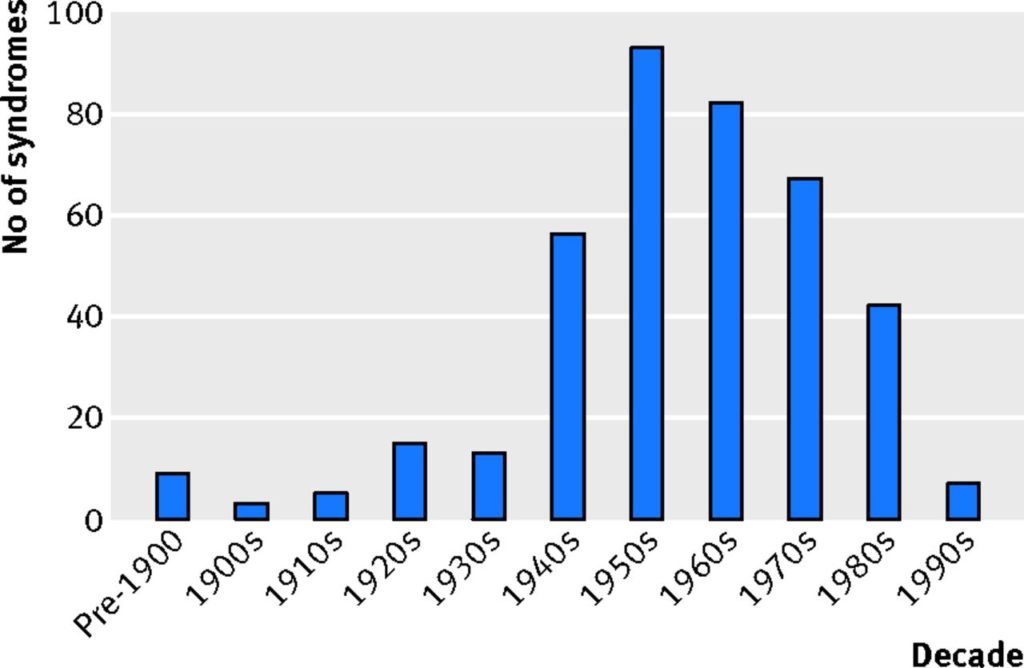 Figure 1. Frequency distribution of a random sample of 392 eponymous syndromes and diseases listed in Stedman’s Medical Eponyms, according to the year in which the eponym was first mentioned in a paper listed in Pubmed

Loanwords These are words that have been borrowed from other languages, such as the cardiomyopathy called takotsubo (Japanese for an octopus trap, whose shape the abnormal heart fancifully resembles); “pharmacovigilance” is a loanword from French.

Neoclassical compounds These are words formed from [typically] Greek and Latin roots. They can be complex (formed by derivatising existing words) or compound (formed by joining elements of other words together). Purists demand that when two or more elements are juxtaposed, they should contain derivatives of a single language, not a mixture, like “television” from Greek and Latin. In A Dictionary of Modern English Usage (1926), H W Fowler (Figure 2) called ill formed words, such as hybrids formed by combining elements from two different classical languages or a classical language and the vernacular, barbarisms. “To create them is a grave misdemeanour; & the greater the need of the word that is made, the greater its maker’s guilt if he miscreates it … word formation is a matter for the specialist.” Fowler’s text was repeated verbatim in Ernest Gowers’ edition of 1965 but reduced to commentary in successive editions by Robert Burchfield (1996) and Jeremy Butterfield (2015). After all, as Fowler himself pointed out, English is replete with barbarisms of this sort.