In various blogs that I have been writing in the last few months about translational research, algorithms, knowledge and its diffusion and dissemination, skills, performance, and competence, implementation has been ever present in the background and is an important part of my operational model of translational research.

The IndoEuropean root PELƎ meant to fill, with the implication of abundance and multitude. Following consonantal change, fill and full are derivatives, as is fulsome, which has changed its meaning twice over the years. The earliest meaning listed in the OED (first recorded in 1325) was complimentary: “characterized by being full of some commodity or material; abundant, plentiful; providing a copious supply, rich.” It then (1390) turned around to mean “offending against accepted standards of morality or taste; morally reprehensible, obnoxious, deplorable” and went on to develop increasingly pejorative meanings, such as “wearisome” (1430); “full and plump; fleshy, corpulent; oversized, overfed,  full-figured; voluptuous” (1447); “physically disgusting; filthy, dirty, foul, loathsome” (1510); “of food: coarse, heavy, filling; difficult to digest, cloying” (1555); “sexually unrestrained, unchaste, lascivious; bawdy, lewd” (1600); and “sickening, nauseating (in taste); sickly-sweet” (1694). Then after a long delay it became complimentary again: “unrestrained, exuberant; effusive; lavish; wholehearted”, as in “fulsome praise” (1936). Take your pick.

From a Greek derivative of PELƎ, πολύς, we get hoi polloi and many words beginning with poly-, a prefix meaning many or too many; polymyalgia means simply pain in many muscles, while polycythaemia means too many erythrocytes and polydactyly too many fingers; but polypharmacy can imply both: many (appropriate) drugs or too many (inappropriate) ones.

Make PELƎ into PLƎ and you get another Greek derivative, πλήθειν, to be full, and a Latin one, plēre, to fill, giving us plethora, plethoric, plethysmography (measuring changes in volume), pleonasm, and pleiotropic. The Pliocene epoch was so called because of the abundance of fossils of species, still extant, that it generated, and the Pleistocene (Greek πλεῖστος, the most) was the last part of the Pliocene; the suffix in each case is from the Greek, καινός, new. 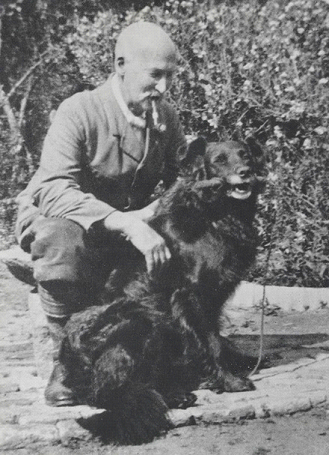 Figure 1. The lexicographer Henry Watson Fowler, with his dog Raven, and an extract from the first edition of Modern English Usage (1926). Fowler wrote that “Barbarism means uncivilized condition, grossly uncultivated taste, or an illiterate expression.” He took exception to Pleistocene, Pliocene, and Miocene (Greek μείων, lesser) because he thought that they were not formed by proper methods of word formation—even though the two elements in each word are Greek, and not hybrid barbarisms, the Greeks would not have combined two adjectives in this way. Pliocene and Miocene were terms introduced by William Whewell.

From Latin plus, more, we get plural, pluperfect, and pluripotent, plus surplus. The Latin word for a marsh, palus, which teems with wildlife, is another conceivable derivative, giving us paludial, palustrine, and Paludrine, which contains proguanil hydrochloride, a treatment for malaria. From Latin plenum, full, we get plebeians (the hoi polloi in their multitude), plebiscite, plenary, plenitude, plenty, plenipotentiary, and replenish, as well as accomplish, complement and compliment, complete, comply, deplete, expletive, replete, supply, and of course, implement.

In Latin implēre meant to fill up. The noun implementum meant something that added to your stocks of anything, and therefore fulfilled a purpose or completed something, and, by confusion with employment, something that was used or useful. Implementation therefore means simply the act of implementing or fulfilling a task.

The rate at which an innovation is implemented was first characterised in 1962, by Everett Rogers in his book Diffusion of Innovations, in which he described four phases in the promulgation, and with it the implementation, of the outcomes of research: introduction, early adoption, late adoption, and never adoption. Rogers called those who fill these categories, innovators, early adopters, the early majority, the late majority, and laggards.

The term “implementation research” had few early adopters and although, with a few sporadic exceptions, it only started to appear in 1995, it did not begin to be widely used until a decade later, when it was defined as “scientific investigations that support movement of evidence based, effective health care approaches . . . from the clinical knowledge base into routine use.” At the same time, after a 2004 conference on implementation research, the term “implementation science” started to be used. It was defined as “a body of knowledge on methods to promote the systematic uptake of new or underused scientific findings into the usual activities of regional and national health care and community organizations, including individual practice sites.”

The frequencies with which the two terms appear in publications indexed in PubMed have increased in parallel since then (Figure 2).