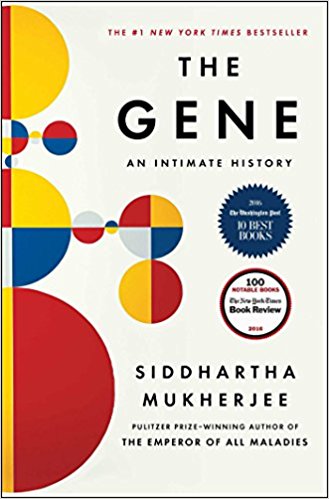 All is now secure and fast;

Not the gods can shake the Past;

Ralph Waldo Emerson The Past

The US Food and Drug Administration recently recommended the approval of a gene altering treatment for leukemia, which could be the first gene therapy available in the US. The therapy involves rewriting the genetic code of patients’ white blood cells to make them attack their own cancer. Yet although it may sound like science fiction, this advance has been millennia in the making, and is simply the latest step in humanity’s long quest to unlock the essence of life—the gene.

Siddhartha Mukherjee’s latest work, The Gene: An Intimate History, explores this journey in detail. By tracing the “normalcy before it tips into malignancy,” The Gene functions as a prequel to his Pulitzer-winning debut The Emperor of All Maladies: A Biography of Cancer. From the ancient Greek scientists to today’s high-tech university labs, Mukherjee traces the long history of genetics and our understanding of evolution.  Cells, proteins, nucleic acids, and atoms are all characters in Mukherjee’s work, as are Darwin, Watson and Crick, and Bill Clinton.

H G Wells referred to genetics as “the missing science”—humanity has always been instinctively aware of the idea of heredity, if only for its most practical uses. Humans have long bred dogs for their particular traits, selected the best plants for yield, or even chosen mates for their most desirable attributes, keenly aware of the likelihood of those traits being passed on to the next generation. The concept of units of heredity that would go on to generate a vast scientific field has, therefore, been an intuitive idea that lacked a definition. This book captures the progression from that intuitive sense of genetics to its birth as a veritable science and, for better or for worse, its evolution into a powerful tool.

While genetics held promise of providing “power on an enormous scale,” its implementation has not always been used to promote good. To demonstrate this, The Gene contrasts the ingenuity of Mendel’s pea plant experiments with the horrors of eugenics in Nazi Germany and in the United States. In other words, the story of the gene is emblematic of both the highest pinnacles and most perverse failings of scientific progress.

At the same time, the gene—crucial to evolution and all life—has morphed into “one of the most dangerous ideas in history.” Genetic arguments were the backbone for Richard Herrnstein’s The Bell Curve, which argues that Asian and white people have an intellectual genetic advantage over people of African descent, and for the forced sterilization of thousands of people in the United States during the 20th century in the name of eugenics.

But the gene also holds the power to bring us closer together. The widespread use of in-home genetic testing kits has given the world a wealth of information. It is now known that 30% of white Britons can trace their DNA to German ancestry, that 40% of their DNA is shared with the French, and that they share common ancestry with those living in Africa and the Greek Isles. We have more in common than we think.

The book ends not with a conclusion, but with a feeling of anticipation. The possibilities of where genetics may lead us in the near future are both exhilarating and terrifying. In many ways, The Gene is a call for caution and for a thoughtful consideration of the possibilities that progress may bring.  Mukherjee urges us to pay attention to our history in order to remain cognizant of the complicated nature of scientific innovation, especially in fields that have the ability to redefine our identity.

We are now entering the next phase in the story of the gene. In 2016, the UK became the first country to legally permit genetic modification of human embryos and the first to allow for the replacement of parts of embryonic genomes with a third person’s DNA.  Then, last month, scientists in the US reported that they had successfully corrected a cardiac disease mutation in human embryos using a gene editing technique called CRISPR-Cas9.

But despite the promising results, the pioneers of the CRISPR editing technology are urging caution. When genes become tools, what will those tools be used for? As we try to answer that question, Mukherjee’s book asks us to carefully look back before we continue to move forward.

Next Month:
We will discuss Tracy Kidder’s A Truck Full of Money

-What does the story suggest about the complex relationships between people and their psychiatric disorders?

-Does the text ask us to reconsider the conventional understanding of mental illness as debilitating?