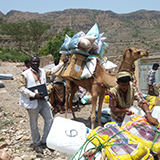 I recently completed my third humanitarian mission in Yemen with Médecins Sans Frontières (MSF). I arrived in April 2015, just after the war escalated and the bombing started. During most of my 20 months in the country I have been in Taiz managing MSF’s operations in the city during incessant fighting. The humanitarian needs are overwhelming and too few organisations are responding to them. We treated more than 10,000 war-wounded patients in Taiz during the first two years alone.

In the last six weeks we treated 937 people wounded in fighting in and around the city—the highest numbers so far this year. Nearly 200 of these people died from their injuries. Nearly half of our patients were women and children injured in explosions, or suffering from burns, gunshot wounds, or shrapnel.

The city, once Yemen’s third largest, has shrunk to about a third of its pre-war population. Yet it is still a densely populated urban war zone where about 200,000 people live amid constant shelling, airstrikes, and armed clashes. An array of different groups holds the city centre while they are surrounded by Ansar Allah (Houthi) forces and forces allied with the former President Ali Abdullah Saleh. Groups in the city centre also frequently clash among themselves.

Shells are launched in and out of the city centre while the movement of people and goods is severely restricted and tightly controlled. None of the warring parties in Taiz show adequate respect for the protection of civilians. Our patients and their caregivers on both sides of the front lines have reported being injured by shelling in their kitchens, wounded by airstrikes on their way to their fields, shot at while walking in their neighborhoods, and maimed by landmines while herding their livestock. Medical services have also been struck: shelling and gunfire have repeatedly hit hospitals, an airstrike hit a clinic, and armed men have shot at, confiscated, and intruded into ambulances.

MSF runs one hospital and supports four hospitals on both sides of the front line, but the situation in Taiz makes it very difficult to maintain quality care. Yemeni staff working in public hospitals have not been paid by the government since August 2016 and must increasingly look for other opportunities to provide for their families. The lack of staff recently forced the biggest government hospital in Taiz, Al Thawrah, to suspend all surgical services for the whole week of Eid. Without salaries for medical staff, the health of Taiz’s population will only continue to deteriorate.

The massive cholera outbreak in the country has further complicated an already worrying situation. The only cholera treatment centre in Taiz currently admits about 100 patients per day and the number is increasing. The war has reduced much of Yemen’s infrastructure to rubble and reduced access to safe water, which makes the outbreak difficult to contain. Although UN agencies have promised to support cholera treatment, insecurity makes them hesitant to send personnel to Taiz, further crippling the response. There are hardly any aid organisations on the ground with the capacity to effectively carry out health promotion activities or case management—which are necessary to control the outbreak.

Taiz’s cholera treatment centre, which is government-run, is running out of supplies. Humanitarian organisations need to increase their support and have a physical presence in Taiz, but most do not have international or Yemeni staff in the city. Just sending money is not enough. Like the rest of Yemen, Taiz needs aid organisations to be on the ground to carry out the work.

While I was in Taiz, I lived with my colleagues in Al-Thawra Hospital. We felt safer there, but we still never knew when stray bullets or rockets would strike. In May, there was continuous shelling and up to 100 rockets fired per day, with no way of knowing if one would land on us. One night, two MSF-supported hospitals were struck by random fire. At the MSF-supported Al-Jumhouri hospital, a stray bullet entered the neonatal ward and hit an incubator, stopping less than four inches from the head of a newborn baby.

These incidents luckily did not cause any casualties, but unfortunately many other similar incidents have. One hospital staff member survived a head injury in a rocket explosion, but later lost his legs to a land mine. The fighting is an ever-present threat for everyone in Taiz.

The situation in Taiz today is just one example of how the people of Yemen have been completely forsaken. MSF’s impact is modest considering the scale of the violence. It is frustrating not to be able to do more, as the needs are so massive.

Salah Ibrahim Dongu’du who is from South Sudan, is a project coordinator with Médecins Sans Frontières (MSF). He has worked for MSF since 1999 in Sudan, Somalia, Indonesia, Ethiopia, Bangladesh, South Sudan, Nigeria, Pakistan and Yemen.