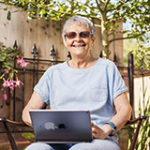 Wendy Mitchell, who has young onset dementia, writes about taking part in dementia research, being valued, and opportunities to change the future.

Imagine being given a diagnosis of young onset dementia. Your life falls apart, you feel worthless, and of no use to anyone anymore. Services are non existent so you feel abandoned.

That’s what happened to me in July 2014 when I was diagnosed with young onset dementia.

Now, imagine, if someone then came along and asked for your opinions, asked you to be involved in gathering information. Someone who was genuinely interested in what you had to say. Someone who was willing to travel to your home just to see you. Imagine how that would make you feel.

That’s what happened to me when I started to be involved in research.

Taking part in dementia research: an alternative to just hoping

As soon as I was diagnosed I wanted to take part in research—however, my clinicians decided for me that I wouldn’t want the hassle, so never offered me the possibility. So I found it very difficult to find any sort of research to take part in initially. So when I was asked to help launch and promote the Join Dementia Research database, I jumped at the chance.

We need to have an alternative to just hoping and wishing you don’t get dementia, but this can only be achieved through research. Being involved makes you feel valued as you’re contributing to possible future developments—you could be helping to remove the inevitability that a diagnosis currently brings, giving hope to your children. We all know there is no cure and without willing volunteers to test new theories, there will continue to be no cure.

However, I know researchers can find it very difficult to find people who will to take part. This may be due to overprotective clinicians, or overprotective family and friends, but may also simply be due to lack of understanding around the meaning of research and what it entails.

Technology testing, trials and me

While I was still at work I took part in some social research run by the University of the West of Scotland which looked at the experience of those of us with dementia and still in employment. I’ve also tested many apps for the iPad. Future generations will expect things like apps or some sort of technology as it’s part of their everyday life, so I’m pleased to be involved in testing and developing these. If I can use them anyone can.

I’m taking part in the IDEAL trial which is a three year trial looking at living with dementia—it involves answering questions in your own home about every part of your life for the next three years to see how circumstances and attitudes change. I’m doing this alongside my daughter who is answering the exact same questions from a relative’s point of view.

I’m also about to have my second visit as part of the PRIDE trial—another social research study looking at remaining independent with dementia.

I’m now looking for a new clinical trial as I’ve just finished the MADE trial, a two year trial testing an antibiotic drug currently used in the treatment of acne—they believe it may reduce inflammation of the brain. I’m told there are many new ones on the horizon, so I’ve just got to be patient.

Involve us from the start in dementia research

Who better for researchers to work with from the very start, than people living with dementia. Just because we have dementia doesn’t mean we’re not capable of advising you on project design; just because we have dementia, doesn’t mean we can’t be involved with committees—after all how do you know you’re getting it right if you don’t involve the very people you’re hoping to interview? Involve us in promoting your research and to encourage others to take part—to encourage those who have never taken part to be involved. We all had talents before a diagnosis of dementia—we don’t suddenly lose all those talents overnight when we get a diagnosis.

We have to normalise talking about research and to do this we must have GPs and other healthcare professionals, like district nurses, OTs, or physios, all coming on board. These are often the very people we see most often. To normalise talking about research would normalise involvement. That’s why a few of us along with Piers Kotting, have launched the Hand Out Hope campaign. It aims to encourage all healthcare professionals to hand out hope in the form of a Join Dementia Research leaflet. Words of encouragement cost nothing and eat into no one’s budget.

I have dementia, but…

So, as you can see, I have dementia, but I’m still able to contribute to society. Many people when they hear the word “dementia” think of the end. Well we’ve got an awful lot of living still to do and people so often forget that, especially when diagnosed with young onset.

That’s also why I like to get involved at talking and helping students. Those at the beginning of their career, after all they’re the researchers of the future. They have so much less baggage and pre-conceived ideas. They’re also full of enthusiasm to learn and understand more about dementia. They can help change the future of dementia, to change views, perceptions and reduce the stigma around dementia.

Why am I so willing? Because I like to be involved, because being involved has given me back that sense of purpose that a diagnosis of dementia stripped away from me.

Being involved makes me feel valued and people listen to what I have to say…….which a diagnosis of dementia stripped away from me

The full version of this blog was originally published on Evidently Cochrane, a blogs site that usually features new or updated Cochrane reviews on a health topic.

Competing interests: Wendy Mitchell has nothing to disclose.