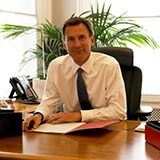 As a nation we’re fortunate that in NHS staff we have one of the most flexible workforces on the planet. When patients need care at the end of a shift, staff don’t point to an annex in their contract—instead they go the extra mile to do the right thing. And when necessary, as we saw in the Manchester and London attacks, they go even further, dropping everything, coming into work in the middle of the night, fighting back tiredness to make sure lives are saved.

Less remarked on is that to make that discretionary effort possible a huge amount is also asked of friends and families to make sure kids are picked up from school, the dog is walked, or that someone pops round to check a parent is ok.

But if staff and their families do all this to help us, how much do we do to help them? If we want to retain staff (and this week’s nurse numbers show we need to do better) we must recognise that sometimes rather inflexible NHS contracts make it too difficult for people to juggle a busy work life and home duties.

We have an inflexible employment model, established and entrenched over many decades, which rolls forward a way of working that was perhaps the norm twenty or thirty years ago, but hasn’t kept pace with the changing realities of people’s lives. Millennials are happy to juggle, but expect employers to make it easy for them. Older workers want to work beyond retirement, but in a different way. Look at the way British Airways fills its 24/7 rotas for aircrew using an app that can be downloaded onto your phone to make it easy to request time off for childcare or holidays. Compare that to some parts of the NHS where the only way to replicate that flexibility is to work as a locum doctor or agency nurse—less good for patients and more expensive for the NHS.

Nishma Manek wrote a thoughtful BMJ opinion piece on this last week where she warns against intergenerational stereotyping. But she also correctly points out that people (of all ages I would argue) want roles where they have more control over their time. And we have to respond to that if we want to keep our workforce. However for some managers flexible working can feel like more of a problem than a solution. Although we have more nurses and doctors compared to five years ago, the NHS is also much busier so it can be a headache filling rotas and covering shifts to ensure the highest standards of safe and compassionate care.

But look at what trusts in Plymouth, East and North Hertfordshire, Salisbury, and Leeds are achieving by following the e-rostering model used by airlines. Look at the combined regional or city-wide nursing banks in Cheshire, Devon, or Northumbria that mean that for the first time in living memory trusts are spending more on bank staff than agencies. Last year the NHS reduced agency spend by £700m—that’s £700m more for frontline care—but that was only possible because so many trusts are starting to make a reality of flexible working.

According to the WHO there is a worldwide shortage of around 2.6 million clinically trained staff. Every single clinician we have is not just precious, but also vital to the future of the NHS. When they need time off to care for children or elderly relatives, when they want to step-down their workload towards the end of their career, we should not be giving them a binary choice that involves choosing between job and family. We should recognise that making those trade-offs and choices is part of all our lives so the job of the NHS is to make it as easy as possible for people to carry on working while shouldering other responsibilities, family or other. That means being creative, ingenious and above all—flexible about the need for flexible working.