We are lucky in BMA House to have a beautiful and well looked after garden. It is all the more of a luxury for being in the very centre of London. It was this garden that provided the venue for two talks that formed part of the Chelsea Fringe Festival. I attended one of them, where the focus of the evening was to discuss how gardens can be used to improve health.

The two speakers—Sally Armour, a landscape gardener at Arup, and Aria Eunice, a GP in London—impressed how vital gardens and healthy cities are for our health and wellbeing. Anyone who takes time to sit out in the garden, or spend time outdoors, will know how beneficial this is for one’s mood, stress levels, and wellbeing. Plenty of research shows that gardening and being outdoors in green spaces is good for our physical and mental health. GPs are now using social prescribing to encourage their patients to spend more time outside. 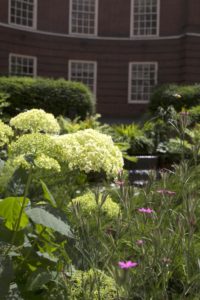 And yet, the outlook isn’t good. The UN estimates that by 2050, 75% of the world’s population will live in cities—cities that are designed around cars and are not conducive to good health. Our living spaces need “an intelligent redesign,” said Armour, so that we can reclaim the streets and ensure that people become more physically active. She cited a study which estimates that people spend 80-90% of their time indoors [Klepeis 2001]. As well as being detrimental to our physical health, this is also leading to increasing rates of loneliness and social isolation, with The British Red Cross recently estimating that 9m people in the UK are lonely.

But efforts are being made to change this. The founder of “Progress,” an initiative that promotes growing food in inner cities and land redevelopment in low income areas, spoke about how the project combats social exclusion and communities at risk. Volunteers with the Lambeth GP Food Cooperative, whose work was described last year by Richard Lehman, spoke about success in encouraging communities in the area to grow food in spaces in and around GP surgeries. But, their funding is scarce and running out.

Sally Armour provided larger scale examples from around the world. In Madrid, a large development project has redesigned the city, so that an inner ring road is now buried underneath the city. The area where the road used to be has been transformed into a park, the Salon de Pinos. New York City has a “Streetfight” project, which is redesigning small areas of the city into greener, more attractive spaces. In Bogota, Colombia, certain roads are closed to cars every Sunday, and residents have to cycle into the city. As well as reducing pollution and encouraging people to be active, this has reduced crime rates and got people outdoors and talking to each other. The idea has now been adopted worldwide. 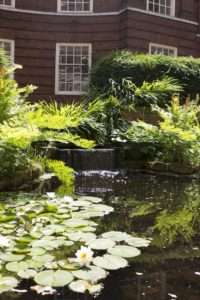 I left feeling encouraged by the positive impact that these projects are having, but also worried that modern life does not allow us to spend time outdoors. “We live our life in boxes,” said Sally Armour, borrowing from a quote that she heard recently, which perfectly describes many modern lifestyles that involve leaving the house, driving to work, sitting in front of a computer, and returning home to watch the TV.

Unlike the residents of BMA House, not everyone has the luxury of a garden or green space to enjoy. We need to build our cities to address this.

The BMA garden will be open on Saturday 17 June as part of the “ Open Garden Squares Weekend.”