I have previously written about cadmium and lithium, two of three elements that were discovered in 1817. The third, selenium, was discovered by Jöns Jacob Berzelius (1779–1848), who is also credited with having discovered cerium, silicon, and thorium. Berzelius wrote that the similarity of its properties to those of tellurium had induced him to call the new element selenium.

Tellurium had been discovered in 1782 by Franz-Joseph Müller von Reichenstein in a gold ore and was named by Martin Heinrich Klaproth in 1798 from the Latin word tellus, meaning earth. And so, because of the similarities between the two elements, Berzelius named the new element selenium after the moon, in Greek σελήνη. Perhaps appropriately, selenium sits directly above tellurium in Group 16 of the periodic table.

Selene, one of several Greek goddesses associated with the moon, such as Artemis and Phoebe (Greek ϕοῖβος, bright or radiant), was the daughter of the Titan Hyperion, himself a son of Uranus and Ge, personifications of the heaven and earth. She was the sister of Helios, who was identified with the sun, and Eos, the dawn. Selene fell in love with the mortal Endymion (picture), who was granted immortality and eternal youth on condition that he sleep forever, with his eyes open, so that his full beauty could be appreciated. How that can be reconciled with the fact that he and Selene had 50 children, eyes open or not, is not clear. Keats tells the story of their love in his poem Endymion (1818). 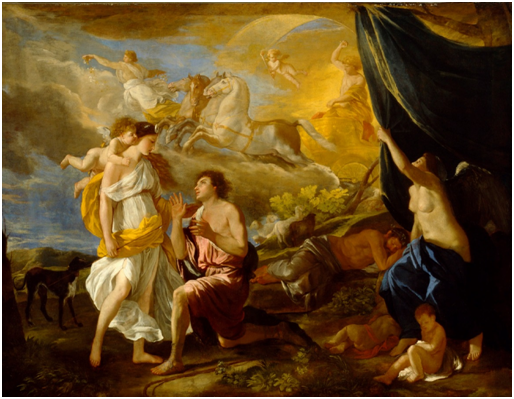 The goddess Selene with the mortal Endymion (Nicolas Poussin, 1630)

Selene’s moonshine name comes from the IndoEuropean root SUEL, to burn or shine, from which we get sultry and swelter. The Greek verb σελήνιάζομαι meant to be moonstruck, a supposed cause of epilepsy, which was therefore called σελήνιασμός.

Much has been written about selenium. A PubMed search yields over 30 000 hits, and nearly 2800 when the search is restricted to titles of publications containing the word “selenium”. It is regarded as an important trace element, with a recommended minimum daily intake, available in a healthy diet, of about 50 micrograms, based on maximal glutathione peroxidase activity in plasma or erythrocytes, and deficiency is recognised as a clinical problem. Topical selenium sulfide is used as an antiseborrhoeic agent and in the treatment of pityriasis versicolor infection, although it can cause adverse reactions such as skin irritation.

Otherwise, therapeutic uses of selenium are poorly attested. Its supposed beneficial effects span too many conditions to list here, including cancers and HIV/AIDS. Its effects in cancers have been suggested to be mediated by antiandrogen effects, growth inhibitory effects by regulation of p53 and antioxidant function, and through effects on DNA damage and apoptosis. Several selenium based drugs and compounds that target selenium metabolism have been developed, including purported antihypertensive, anticancer, antiviral, immunosuppressive, and antimicrobial agents, but their therapeutic potential has not been realised.

Selenium toxicity is reportedly similar to arsenic toxicity. Its most common symptoms are nausea, vomiting, fatigue, and irritability; it can cause nail changes, and other reported effects include watery diarrhoea, abdominal cramps, dry hair, paraesthesia, and a garlic-like odor on the breath. Selenium has also been implicated in amyotrophic lateral sclerosis in Italy.

There is an unexpected mythical link between selenium and another of this year’s anniversary discoveries, cadmium. The name of the nymph Semele may be from a non-Greek word meaning “earth” (compare Slavonic words, like the Russian Земля, zemlya), but it may rather be a metathetical variant of Selene, or influenced by it. Ovid tells her story in Book III of his Metamorphoses. When Zeus seduced Semele, his angry wife Hera, in the shape of Semele’s nurse Beroe, tricked her into testing the divinity of her lover by asking him to appear in his true form. When Zeus revealed himself to her, even though he was “Clad in the mildest light’ning of the skies, And arm’d with thunder of the smallest size”, nevertheless the power of his equipment killed her. Zeus implanted her fetus, Dionysus, in his thigh, and when he was born he went down to Hades to bring his mother back to life and immortality. Semele was the daughter of Harmony and Cadmus, after whom cadmium is named.