In their landmark paper in the British Journal of Cancer 45 years ago, Kerr, Wyllie, and Currie reported a phenomenon that they described as “controlled cell deletion”. They proposed calling it “apoptosis” and explained the term in a footnote, as follows:

The word “apoptosis” (ἁπόπτωσισ) is used in Greek to describe the “dropping off” or “falling off” of petals from flowers, or leaves from trees. To show the derivation clearly, we propose that the stress should be on the penultimate syllable, the second half of the word being pronounced like “ptosis” (with the “p” silent), which comes from the same root “to fall” and is already used to describe drooping of the upper eyelid.

This statement contains two spelling errors and an incorrect assumption. The first error is in the breathing over the alpha. All Greek words that begin with a vowel or the letter ρ (rho) are marked with a diacritic called πνεῦμα, a breathing, to indicate the presence or absence of aspiration. For example, ἀμάραντος, unfading, has a smooth breathing (like a comma) above the initial alpha, and is pronounced amarantos, whence “amaranth”, a fabled never fading flower, an emblem of immortality. In contrast, ἁμαρτία, a failure, has a rough breathing (like a reversed apostrophe) above the initial alpha, and is pronounced hamartia, whence “hamartoma”. Kerr et al used a rough breathing instead of a smooth one. Secondly, a sigma at the end of a word was written with a symbol, ς, distinct from the ordinary sigma, σ; Kerr et al used the ordinary sigma in the final place. The Greek word is not ἁπόπτωσισ but ἀπόπτωσις.

The incorrect assumption in the footnote is in proposing that the second p in “apoptosis”, should be silent. This is wrong for two reasons. Firstly, the Greeks pronounced the π at the start of πτῶσις. Secondly, although “ptosis” is pronounced in English with the p silent, the p is sounded when ptosis is a suffix, as in blepharoptosis, metemptosis, nephroptosis, proctoptosis, proptosis, and visceroptosis. For “apoptosis” the Oxford English Dictionary, which uses the International Phonetic Alphabet, offers /ˌapɒpˈtəʊsᵻs/ as the pronunciation.

The IndoEuropean root PET meant to rush (προπέτῶς, impetuously or petulantly) or to fly (like a pterodactyl or archaeopteryx). Competitors rush to win and impetigo rushes across the skin. In Greek ποτᾰμός is a rushing river, in which we may see a hippopotamus, a river horse, although not in Mesopotamia, which lies between two rivers, the Tigris and Euphrates, and in Oxford between the upper and lower levels of the River Cherwell.

Since what goes up must come down, a Greek derivative of PET, the reduplicated πίπτειν meant to fall precipitously, literally and metaphorically; πτῶσις was a fall or calamity or the arrangement of terms in a syllogism; πτωμισμός was the falling sickness, epilepsy; and πτῶμα was a fallen body, a corpse. Ptomaine, any of a group of amines formed by putrefaction of animal tissues (e.g. cadaverine), could supposedly kill you by food poisoning.

With p changing to f, as pater becomes father, PET begat feather (Greek πτερόν) and fern (πτερίς). From Old Latin petna, came penna, a feather, giving pennon and pennant (swallow tailed flags) and pen, a writing implement made from a bird’s feather. Pinna in Latin was not only a feather but also a fin or a flap, like the pinna of the ear.

Since the apoptosis paper was published it has been cited over 16 000 times (Figure). The first comment, an editorial in The Lancet, appeared within three months. Its anonymous author thought that the phenomenon would “surely stimulate ideas for new experimentation in areas such as ontogenesis, teratogenesis, carcinogenesis, and tumour regression”, but the process, he thought, might not be controlled, and he criticised the invented term: “In most flowers the falling of the first petal is followed soon by the fall of the last, and for deciduous plants the falling of the first leaves signifies that massive autumnal necrosis will soon follow. The term is, therefore, not quite right etymologically.” Be that as it may, “apoptosis” has stuck.

In classical Greek ἀπόπτωσις also meant a falling in a grammatical sense—declension, a system of cases and case-endings. Several years ago the chairman of a visiting group of academics tasked with scrutinising our teaching skills loftily told us at the end of the day that we were free to go home, and since we were Oxford academics he presumed that we would spend our evening “conjugating Latin nouns”. Verbs are conjugated, nouns are declined. A colleague whispered to me that he thought he would rather go home and conjugate his wife. 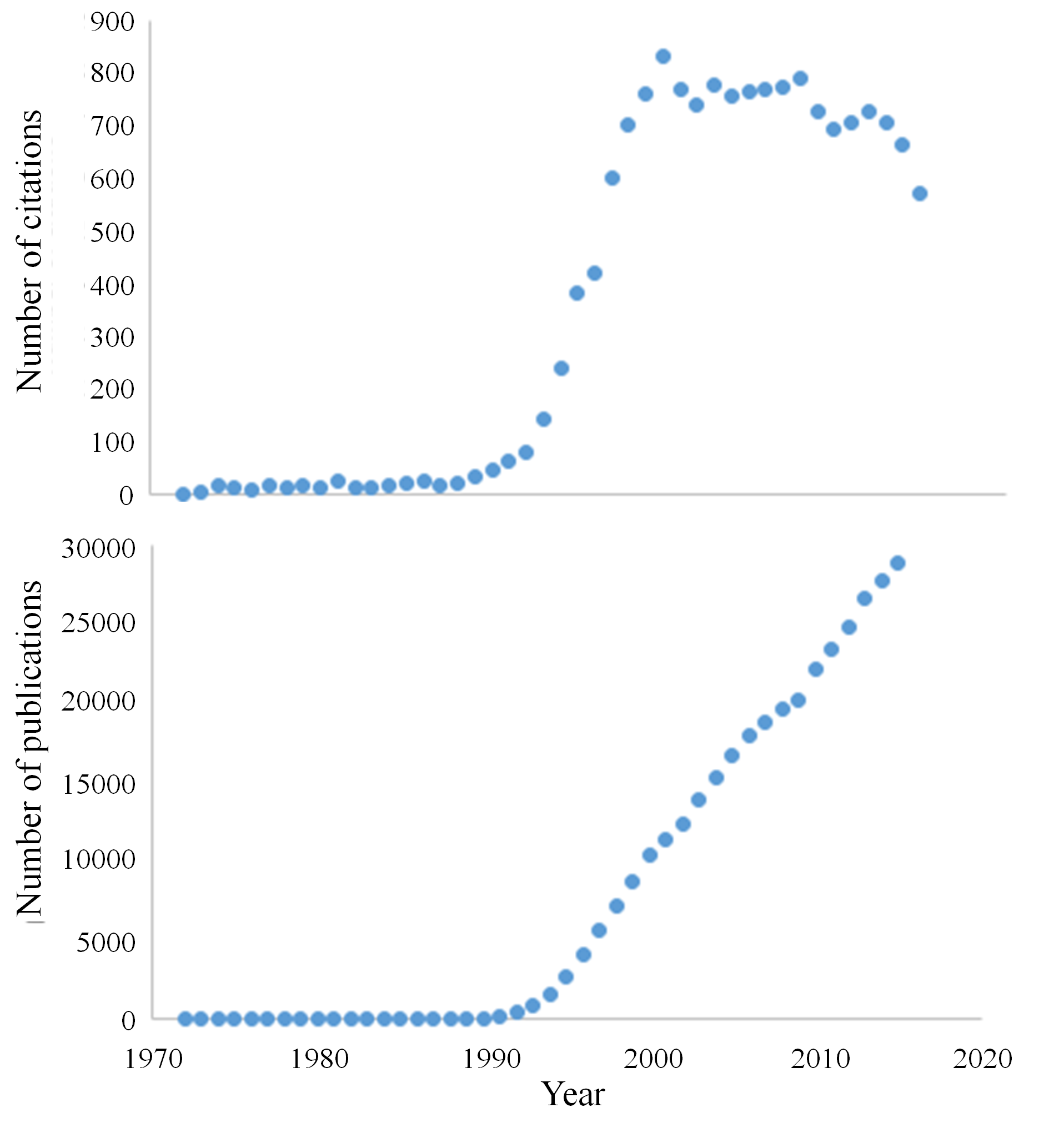 Upper panel: Numbers of citations of the 1972 paper by Kerr et al year by year (source Google Scholar); interest did not start to grow until about 1990, although the paper had by that time garnered nearly 400 citations, making it something of a citation classic before it really got going.