After several days when I could tourist around the Games and Rio, while the Olympic stadium was converted from a football to a track and field venue, I was back with the medical team this weekend, keeping a close eye on the high jump part of the women’s Heptathlon. Team GB had two competitors, Jessica Ennis-Hill, the Olympic champion in 2012, and her challenger, Katerina Johnson-Thompson, so there was real strength in depth in this event.

But what has been happening in the medical centre? We too have strength in depth as my colleagues include a paediatrician and a GP, as well as the expected sports-related specialities. They are very necessary, as I have seen many families travelling to events with small children, even babes-in-arms, and the conditions that we have been consulted on are those a GP must often see. 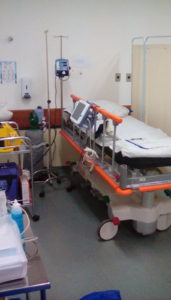 There are the expected minor injuries from trips and falls on the stairs and ramps of the stadium, dealt with either on the spot or in the medical base by the nurses. No one so far has needed suturing. Other spectators who have been in the centre include one with acute heel pain with no history of trauma, possibly gout, some quite severe nausea and vomiting, so dehydrating that an IV drip was started, a suspected adverse response to an antibiotic prescribed by the patient’s own doctor, and a diabetic with an acute ingrowing toe nail infection. The last was transferred to a local hospital by one of our ambulances. Meanwhile, there has been a constant small trade in minor analgesics for headache and minor sprains. We even had a real athlete! An athlete was gripped by pain in their leg, and arrived in a wheel chair, looking so distressed that I wondered about a fibular fracture, but real sports doctors found no injury, no need for X-ray, and handed him to our physios who soon made him comfortable. 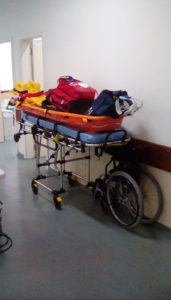 I have mentioned our facilities in my previous blog, so here are some pictures: one taken in a brief moment when there were no patients in the centre (above), and one of our rescue kit that we take out on to the field of play. Several sets are available, because field of play teams are positioned at each corner of the stadium, for rapid access to any casualty. We’re ready and willing, but glad to say, so far unneeded!