Invited last week to the MuST9 philosophy conference—Evidence, Inference, and Risk, in the Center for Mathematical Philosophy in Munich’s Ludwig Maximilians Universität, the ninth in a series held in turn in Munich, Sydney, and Tilburg (hence the name)—I mused on the definition of mechanism, particularly in relation to physiology and pharmacology.

In my general approach to definition I explore etymology, usage, definitions that others have crafted, and operational aspects of the definiendum, taking inspiration from the Ramsey-Lewis method, in which terms can be defined by the assertions of the theory to which they are relevant. Synthesis of these generally yields satisfactory definitions.

The Indo-European root of “mechanism” is MAGH, power, and its e-grade form MEGH, great. Words from Sanskrit that reflect this begin with mah(a)-: maharaja and maharani, maharishi, mahatma, mahout (from mahāmātra, an elephant-keeper), and The Mahabharata, one of the two major ancient Hindu epics, traditionally ascribed to the poet Vyāsa, which tells the story of the Bharata dynasty and its war and contains the religious text the Bhagavad Gita.

Related Greek words included μάχη (battle), μέγας (large), and μηχανή (a contrivance). The kind of contrivance the Greeks originally had in mind was a crane for lifting heavy weights or an engine of war for throwing them. Corresponding English words include might and main, magus and magic (from Latin via Persian), magnify, and a couple of dozen words ending in -machy, denoting fighting, such as logomachy (disputation about words) and sphaeromachy (tennis), but not stomachy. Then there are machine and mechanism, although it is a mistake to think that pharmacological mechanisms are just machines, despite the parallels.

Interest in mechanisms goes back to ancient times, in, for example, the treatise called τα μηχανικά, attributed to Aristotle but probably written by Archytas of Tarentum or Straton of Lampsacus. However, the earliest appearance of the word “mechanism” in English is in the late 17th century. Robert Hooke, for example, in his Micrographia of 1665, used the word to mean a system of mutually adapted parts working together in a machine or in a manner analogous to that of a machine. Other late 16th and early 17th century usages reveal features that are typical of machines: structures, functions, interactions, and organisation, yielding outcomes. In modern times we find the same elements being invoked time and again, although the terminology has changed: structures are now called entities, functions activities, and outcomes phenomena.

Publications listed in the Philosopher’s Index show that interest in scientific mechanisms has increased since the 1960s. There were two phases in 1965–85 and in 1985–1999 (figure, upper panel), although the percentages of all publications did not increase (lower panel), since the total numbers of publications also increased during those periods. 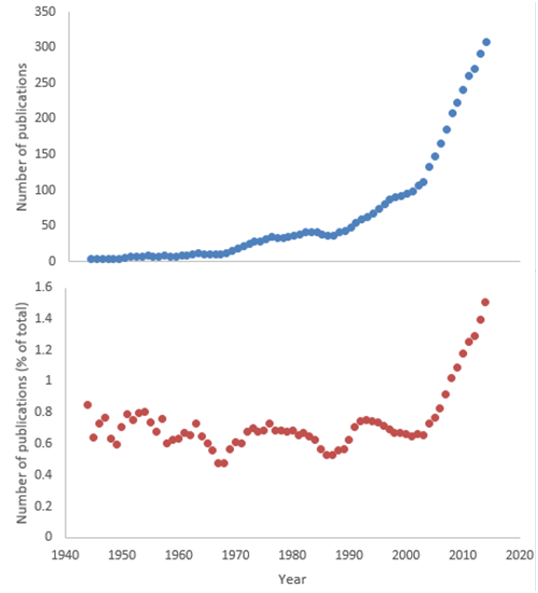 However, since 2000 the number of publications on mechanisms has increased both in absolute terms and in proportion to all publications. This started with the publication in 2000 of the paper that is known as the MDC paper, from the initials of its authors, Machamer, Darden, and Craver. Since then several authors have offered definitions of “mechanism”, the best, in my view, being that by Illari and Williamson: “entities and activities organised in such a way that they are responsible for [a] phenomenon”. This definition has been slightly modified by Glennan: “entities (or parts) whose activities and interactions are organised in such a way that they produce [a] phenomenon”. The idea of interactions introduced by Glennan is necessary, because not all mechanisms are linear.

However, these definitions need to be modified for pharmacological purposes, since they do not take account of other facets of mechanisms: (a) both entities and phenomena can be single or multiple; (b) not all of them are responsible for observed phenomena—they may, for example, maintain phenomena that have been initiated by other mechanisms; (c) the milieu can affect a mechanism—xamoterol, for example, is predominantly a beta-adrenoceptor agonist when sympathetic nervous system activity is low and an antagonist when it is high (for example, in severe heart failure). Thus, my definition of a pharmacological mechanism is “one or more entities and activities organised to interact in such a way as to be associated, depending on the milieu, with a phenomenon or phenomena”.