I began making ceramics just over ten years ago, as a counterpart to my main career promoting and creating opportunities for artists and architects. I quickly discovered the allure of casting clay in plaster moulds; first, the precision with which liquid plaster sets to a clean white negative shape, and then the way in which the liquid clay, poured into the plaster mould, takes on the form of the moulded shape and then pulls away to become the final cast object. Firing and glazing the clay form then sets the object into an almost indestructible state. 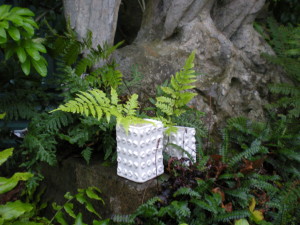 Later on I started working on a freelance and voluntary basis with environmental organisations and became fixated on the notion of the role of waste in causing climate change—the waste of natural resources through badly insulated homes or badly designed machines or processes; the waste of pollution, the waste of over-purchasing of food or goods and the subsequent disposal of the excess; the waste and damage of both people and planet caused by unhealthy over-consumption. I started to re-assess waste materials, not just looking for opportunities for recycling, but also wondering at the materials and technologies on which we had become dependent for the delivery of our basic needs.

Tablets, pills, and capsules delivered in foil and plastic blister-packs fell firmly into this category and I 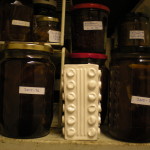 found myself running my fingers over a used blister pack on its way to the rubbish bin, admiring both the tactile quality of its puckered, empty cells, and the sophisticated technology through which I was able to medicate myself with clean, controlled, safe doses of a variety of prescriptions. As the pile of saved, empty packs accumulated, so it seemed did a personal medical history. After playing with various ways of casting and using the packs, at some point I decided that the cast of each strip or used blister pack could form the wall of a square pot which would represent every type of encapsulated drug that I had ingested over a period of two to three years. 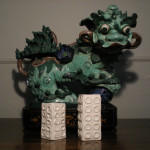 The 34 earthenware pots, finished with a glossy tin white glaze, encompass the run-of-the mill regulars of paracetamol and ibuprofen, occasionally used herbals such as echinacea and valerian, and holiday preventatives such as atovaquone/proguanil hydrochloride. Several different prescriptions of flucloxacillin and amoxicillin arrived with a bout of cellulitis in 2012, and a diagnosis of Parkinson’s Disease in 2011 has occasioned a range of pots celebrating various strengths of ropinirole and levodopa/carbidopa. The pots were first exhibited in the Edinburgh Central Library in June 2015. 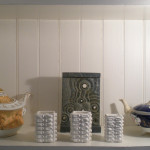 Over the last few years I have undoubtedly been making more frequent trips to the GP and to the pharmacy. It could be that what started as a reflection on the meaning of technology and waste has turned into an acceptance of the degree to which I have become more dependent on medication, and an expression of gratitude for the extent to which the drug manufacturers and the GP’s and other medical specialists have enabled me to counter physical deterioration with some assurance of a continued quality of life.