Some think that the current dispute between the UK Government and the junior hospital doctors is about money. Some think it’s about patient care. Both are only partly right. What it’s really about is feeling valued and fulfilled. The doctors don’t.

The Indo-European root UAL meant power or strength. The Latin derivative valere meant to be physically powerful or strong and hence to be in sound health. The imperative form, vale (two syllables), literally “be well”, was used as a farewell greeting, and valedicere meant to say farewell, giving us valediction. Valetudo in Latin is health and valetudinarians are excessively concerned about their health—the worried well. Valour is courage or bravery in harnessing one’s power or strength, demonstrated by the valiant. Valence is the combining power of an atom. To be valid is to have adequate power, and an invalid lacks power. Convalescence is a period of recovery, during which you regain your health. To avail is to be of service or benefit and to countervail is to be of service against or to compensate; to prevail is to turn power into victory; travail is excessive labour. Droit au travail, French but found in some English dictionaries, is the right to work, as described in article 23 of the 1948 United Nations’ Universal Declaration of Human Rights: “Everyone has the right to work, to free choice of employment, to just and favourable conditions of work, and to protection against unemployment.” That’s all the doctors want, under a reasonable contract.

The Latin adjective valens described a medicine that was strong in its effects. Valerian, wrote Mrs Grieve in her Modern Herbal (1931), was thought by some to have been named after Valerius, who first used it in medicine; and by others to have been derived from valere, to be well, because of its medicinal qualities.

The Romans might call a child Valerius or Valentinus if they were born healthy or perhaps as a wish for their future development. Valerie and Valentine are the modern English equivalents and other languages have similar variants, such as Valerio. However, the French name Valéry has a different origin, from Germanic words, walh ric, meaning foreign power. Curious that the powerful connection remains, but from a totally different root. The Germanic derivative of UAL is wald or wold, giving other powerful names, such as Arnold (eagle strength), Gerald (spear power), Harold (army leader), Oswald (divine power), and Reginald and Reynold (powerful rulers), all wielding their power at the end of their names, while Walter (powerful warrior) has it up front. To wield is to make use of one’s power.

Value, then, is the power that something has, its worth or quality in general, with many nuances of meaning, each of which can be evaluated: material or monetary worth; the extent or amount of a non-monetary quantity; a numerical measure of a quantity; the duration of a musical sound or a silence; the importance of a playing card or chess piece; due or proper effect or emphasis. It also means worth based on esteem according, for example, to desirability, utility, or ability to serve a specified purpose. It is this last meaning that is relevant to the regard that the government has for the doctors, or rather the lack of it. 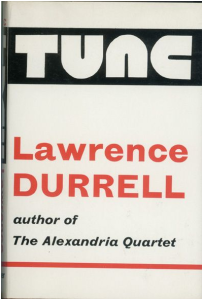 Being valued makes you feel empowered and enables you to be more effective. It also confers a sense of fulfilment. Lawrence Durrell, in his novel Tunc (Faber, 1968), attributed the following aphorism to one of his more pretentious characters, Koepgen: “To fulfil is to fill full”. No doubt Durrell had a sexual connotation in mind, particularly given the anagrammatic power of the title of the book, stressed by the typography on its cover (picture). But that’s precisely what fulfil means—to fill full. Fill and full both come from the Indo-European root PEL or PLE, giving the Greek πολύς, which has too many meanings and derivatives to deal with here, the Latin plenum, plus, and plebs, and the Germanic fill and full. Value your doctors and they will feel fulfilled, a powerful force for healthcare.

Valere in Latin also meant to have political power, and you might expect good government to be based on good values. But power and the ability to assess value are disconnected by cynicism, an attitude that the current government seems to have towards the NHS. And as Lord Darlington, in Oscar Wilde’s Lady Windermere’s Fan, put it, a cynic is someone who knows the price of everything and the value of nothing.