Zeus one day, having nothing better to do, released two eagles from the easternmost and westernmost edges of the world. Flying at the same speed, they met over Delphi, where the god dropped a stone and proclaimed it the centre of the earth or omphalos. Some have suggested that the stone was hollow and that through it the Pythoness inhaled hallucinatory intoxicants. Navel shaped stones can still be seen at Delphi and other religious sites today.

The Sanskrit word for a navel, nābhiḥ, also used as a child’s name, comes from the Indo-European root NABH, but somewhere along the line the n became an m, and OMBH gave ὀμϕαλός (omphalos) in Greek and umbilicus in Latin. Omphalos meant a navel or the umbilical cord and was applied to anything of omphalic shape, such as the boss of a shield, the knob on the middle of a yoke, a bathplug, the knobs on the sticks around which a scroll was wound, an oak gall, the button shaped stalk of a fig, the keystone of an arch. It was used figuratively to describe the centre of an army, the point at which it divides into two wings.

In Latin these meanings diverged. Umbilicus was the navel, any central point, the gnomon of a sundial, a pebble; but the boss of a shield was umbo. In English umbo is also a knob, e.g. on a toadstool cap, the protuberant part of a bivalve shell, and the projection on the inner surface of the eardrum where the malleus is attached, as seen through an otoscope. The amniotic umbilicus is an oval aperture formed by converging amniotic folds and the decidual umbilicus a small scar on a blastocyst.

In English the earlier root gave “navel”. A nombril, from the French word for a navel, is a heraldic term for the point on a shield that is midway between the centre and the base. A navelwort is any one of several plants, such as the marsh pennywort, Hydrocotyle vulgaris (family Apiaceae), and the wall pennywort, Umbilicus rupestris (family Crassulaceae), whose leaves have a central navel like depression, and Venus’s navelwort, Omphalodes linifolia (family Boraginaceae), whose seeds have one and are rich in polunsaturated fatty acids.

“The man without a Navell yet lives in me,” wrote Sir Thomas Browne in Religio Medici (II.x), confessing his Adamic sinfulness, and in Ulysses (3.41) Joyce wrote of Eve that “she had no navel”. However, artists who have depicted Adam and Eve (pictures) have painted them with navels, which Browne, in Pseudodoxia Epidemica (1646; Chapter V in Book 5), called an error, a confusion between creation and generation. 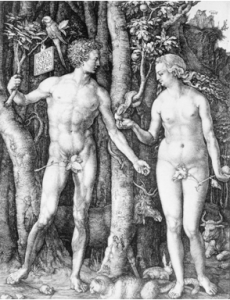 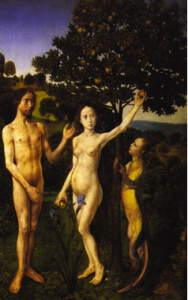 John Stuart Mill said that “the state of the whole universe at any instant [is] a consequence of its state at the previous instant”, implying that perfect knowledge of a single instant would permit knowledge of both past and future. Therefore, Philip Henry Gosse argued, in Omphalos (1857), that when God created the world he also created the fossils and tree rings, both evidence of a much longer earthly history than the Bible suggests. He also argued that God did not intend to deceive when he created the universe thus; that was the way it had to be—each instant implies all previous instants (and Werner Heisenberg was not born until 1901). The stars, for example, created on the fourth day, had to be visible on earth, even though the light they emit would have had to have taken many years to travel there. And God must have created Adam and Eve with navels, even though they were not born of woman.

Bertrand Russell’s reductio ad absurdum of the omphalos hypothesis, in The Analysis of Mind (1921), was that the world might just as well have been created five minutes ago, our memories and all. Jorge Luis Borges discussed this in his 1941 essay “The Creation and P H Gosse” and alluded to it in his short story Tlön, Uqbar, Orbis Tertius (1941), in which he wrote that “one of the schools of philosophy on Tlön goes so far as to deny the existence of time; it argues that the present is undefined and indefinite, the future has no reality except as present hope, and the past has no reality except as present recollection.”

The Wachowskis’ Matrix is the ultimate expression of this—a world that exists only in the mind of a computer.